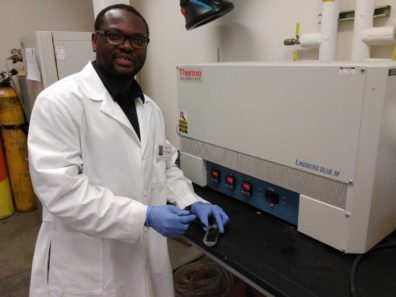 Biochar is produced by pyrolysis of woody (technically, lignocellulosic) materials. By controlling the conditions under which it is produced, researchers can engineer biochar to be more effective for particular purposes. In previous articles, I explored work looking at the potential for biochar to draw down atmospheric carbon dioxide and increase water holding capacity in soils. Michael Aniayia (Figure 1) and his colleagues in the lab of Dr. Manuel Garcia-Perez at Washington State University, engineered biochar for a specific purpose – adsorbing phosphate, a nutrient that, because it is also common in wastewater and manure, can pollute waterways. Aniayia’s objective was to evaluate strategies for producing biochar in order to improve its ability to remove phosphate. END_OF_DOCUMENT_TOKEN_TO_BE_REPLACED 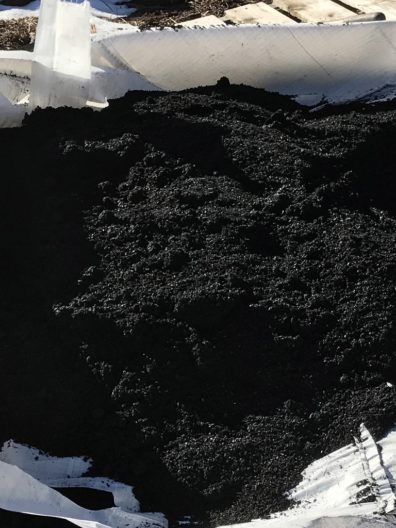 In a recent study, Jim Amonette at the Pacific Northwest National Laboratory and Washington State University Center for Sustaining Agriculture and Natural Resources developed an improved method to estimate the technical potential for biochar (Figure 1)—made from forestry residues and waste wood (Figure 2) and applied to agricultural soils in Washington State—to store carbon, drawing down atmospheric carbon (C) and contributing to mitigating climate change. Amonette selected twenty-six counties in Washington State for application of this improved method (Figure 3). For each county, Amonette developed seven biomass feedstock and biochar process scenarios including one for waste wood harvested from municipal solid waste alone, and six for waste wood combined with forestry residues from timber harvesting operations. The research generated results for each of the 26 counties. END_OF_DOCUMENT_TOKEN_TO_BE_REPLACED 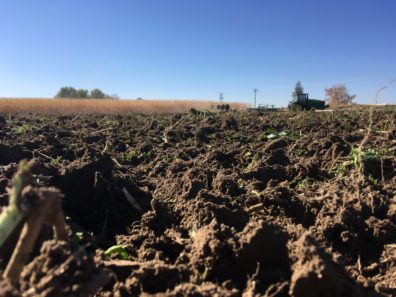 The question “How much additional carbon could cropland soils store through improved management?” led to a new resource being developed. Photo: Leslie Michael.

When you work at a land grant university, people sometimes reach out to you with questions.  I love this aspect of my job, as it often gives me a chance to bridge the divide between research and the real world.  In 2019, one of the questions I got most often was “How much additional carbon could cropland soils store through improved management?”

Over the years, we had already worked to gather the available evidence from across the Pacific Northwest region and help managers interpret that evidence.  But these questions provided us an excuse to re-visit the question. Working with colleagues from Washington State University’s Center for Sustaining Agriculture and Natural Resources and the Department of Biological Systems Engineering, we prepared a white paper summarizing the existing experimental and modeling evidence relating to the carbon sequestration potential of cropland soils in the Pacific Northwest. END_OF_DOCUMENT_TOKEN_TO_BE_REPLACED

During the 3.5 years that I have worked with growers in my role as a Field Representative with McCain Foods, I have met numerous growers who are playing an active role in exploring the biological component of soil health. (Growers generally have a good understanding of the chemical and physical characteristics of our soils.) One of my graduate projects was focused on soil health in the Columbia Basin, which allowed me to gain knowledge on this topic and have these discussions with growers. Farmers essentially are among the most committed environmentalists. The last thing they want to do is ruin the soil they depend on for their livelihood. If you ask around the Basin, you will find that land has been passed on through generations. This is a big motivation for growers to improve soil health; soil is a bank account for future generations.

END_OF_DOCUMENT_TOKEN_TO_BE_REPLACED

A frequently used—at least, by soil scientists—definition for soil health is “the continued capacity of soil to function as a vital living system […] to sustain biological productivity, maintain the quality of air and water environments, and promote plant, animal, and human health” (Doran et al. 1996). Many different indicators—chemical, physical, and biological—are used to assess soil health. 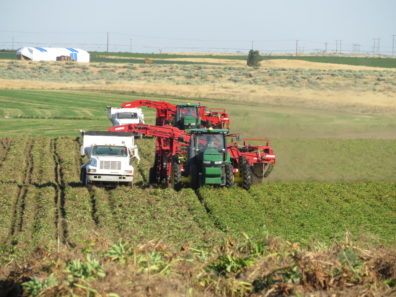 Growing potatoes is notoriously hard on the physical and biological health of soil (Figure 1). Potato production in many areas of the Pacific Northwest involves seven or more soil disturbance operations, leaves little residue on the field, and often involves the use of fumigants to control soilborne diseases. The economics of potato production often drive growers to utilize short rotations. But a suite of strategies are possible to improve soil health in potato production, including cover crops, rotating with perennial crops and crops that contribute high levels of residues, and incorporation of organic amendments. While growing green manure crops for biofumigation has probably achieved the most success and adoption in the region (see producer Dale Gies as an example), in this article I focus on a more challenging strategy that has received limited attention, but may have more direct climate change implications: tillage reduction. END_OF_DOCUMENT_TOKEN_TO_BE_REPLACED 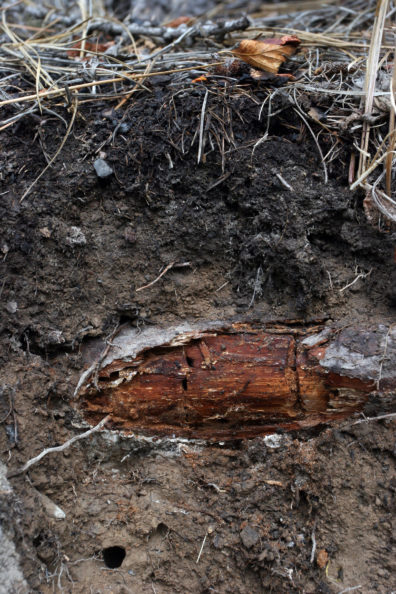 Like other ecosystems, forests store carbon both above and below ground. Photo: Chris Schnepf.

Ten years ago, when I visited with forest owners about climate change, there was a fair amount discussion about what was happening or not, and all the politics surrounding it. But one of the topics landowners were intrigued about—regardless of the extent to which they believed climate was changing—was carbon markets. Forest owners were excited about the prospect of a revenue stream for things they were doing well on their forest, that would result in more carbon being sequestered.

END_OF_DOCUMENT_TOKEN_TO_BE_REPLACED 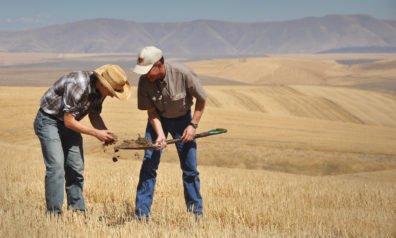 The connection between soil health and carbon sequestration are complex, but advances in soil biology are teasing them out. Photo: Ron Nichols/USDA NRCS under CC BY 2.0.

A number of recent AgClimate.net articles focused on soil health (see for example this article on a soil health NRCS resource  and one on decomposition of wheat residues research). These articles commented on why soil health is important from a climate change perspective: more carbon-rich organic matter in the soil contributes to soil health, and also means less carbon as carbon dioxide in the atmosphere. So the potential exists for a win-win situation. As most things in life and agriculture, the connections between improved soil health and increased carbon sequestration are not as simple as they sound. Check out Andy McGuire’s elegant blog article describing why advances in soil biology—a foundational component of soil health—are important. He explains that it is not because they “change everything,” but because they help clarify why some things work and some don’t as much, and explain how complex that connection between soil health and carbon sequestration in soils appears to be. And though we may not want to hear it, we need this understanding to determine where the win-win practices that both increase soil health and sequester more carbon might realistically be. So take a few minutes to read McGuire’s article—it’s well worth the time! 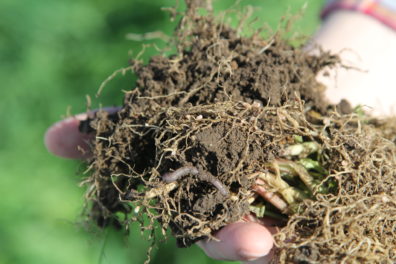 Climate change is expected to increase the vulnerability of our agriculture and natural resource systems. In the face of more extreme and variable weather, there are a suite of soil health management practices that land managers can adopt to build greater resilience and to reduce risks in their agricultural operations (examples of strategies in Figure 1).

Through engagement with land managers and those who work with them, including Extension, Natural Resource Conservation Services (NRCS), and Soil and Water Conservation District (SWCD) professionals, it became clear that many of them were interested in soil health and its linkages with climate change adaptation and mitigation. As a result, Oregon NRCS and the USDA Northwest Climate Hub partnered to develop a resource to aid advisors and land managers in discussing soil health and climate resilience together. END_OF_DOCUMENT_TOKEN_TO_BE_REPLACED

Managing crop residue is essential to reduced and no-till farming systems. These farming systems store more carbon than conventional farming systems, thereby mitigating climate change, enhancing soil health, and reducing soil erosion. In work described in a recent project report, Arron Carter and colleagues have been working to make it easier for growers with diverse needs across the Pacific Northwest to manage wheat residues. While the work is still in progress, it is an illustration of the kind of creative, applied work that is needed to make reduced-tillage systems easier to manage, and more widely adopted across the region. 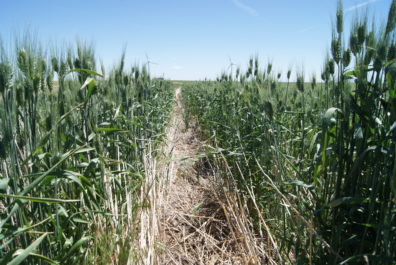 Wheat residue in a field in early July near Bickleton, WA. This area is part of the drier winter wheat-fallow area, where slower decomposing residues are preferred. Photo: Hilary Davis. 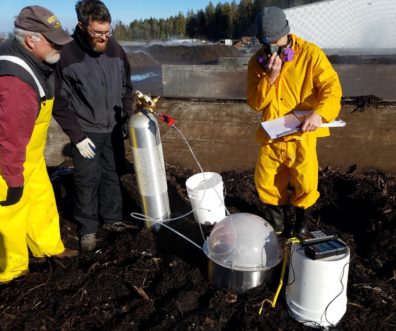