By Rajendra Khanal, Department of Civil and Environmental Engineering, University of Utah 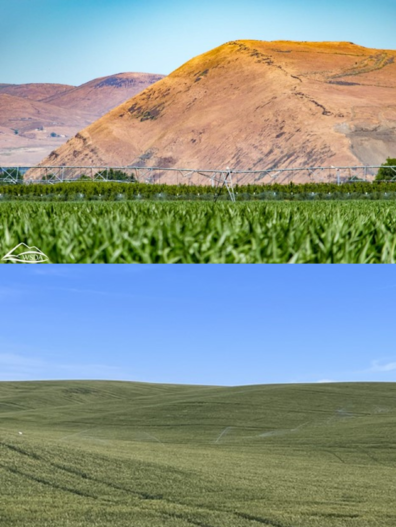 Farmers growing crops such as wheat and corn might be more interested in leasing some – rather than all – of their water to support instream flows in times of water scarcity, which are likely to occur more frequently as the climate changes. Photo: WSDA under CC BY-NC 2.0 (corn) and Rajendra Khanal (wheat).

If you are a Washington agricultural producer who has a water right and wants to lease your water to another user, you are currently allowed to either lease your entire water right and fallow your land (that is, not use any of the water yourself) or not lease and use your full water right for crop production. The option of leasing a part of your water right (partial leasing) does not exist.

Introducing an option for partial leasing could make more farmers willing to participate in water markets, and thus expand markets’ potential as a tool for meeting diverse water needs, especially as climate change increases the likelihood that water supplies won’t be sufficient to meet all demands, all the time. For example, farmers might lease some of their water to support instream flows in times of water scarcity, which are likely to occur more frequently as the climate changes. Although there are a number of challenges that would need to be overcome to make partial leasing a reality (I discuss those later), we started by asking the question of whether the potential benefits of partial leasing are big enough to make it worth bothering to invest the time and money it would take to overcome those challenges. In a recent publication (Khanal et al. 2021), we asked whether there are situations where partial leasing is the most profitable choice for farmers as compared to the “all or nothing” options currently available. And when partial leasing did turn out to be the most profitable choice, we also quantified the aggregate impact of partial leasing being adopted across a watershed on:

We focused on a representative farm growing two annual crops (winter wheat and corn) that have yields that can be grown under varying levels of deficit irrigation in the Walla Walla watershed. We developed a mathematical model that quantifies farm profit for a specific combination of crop prices and water leasing prices, and used the model to predict the potential for streamflow augmentation with water leasing. We found that there are multiple crop and water leasing price scenarios where partial leasing offers a win-win situation by increasing farmer profitability and augmenting instream flows, compared to the “lease all” or “lease nothing” options. For crop prices within the range seen in the last 10 years and water leasing prices within the range adopted in the Pacific Northwest, partial leasing led to an estimated 7.1% loss in crop production compared to the next best option, but a 6.1% increase in farm profitability (due to revenues from water leasing) when 18% of the water normally used on corn and wheat was made available for leasing. If all farmers in Walla Walla adopted this partial leasing strategy, streamflows would be augmented during June and July (a critical period for river flow) by 125 cfs (Figure 1). While not all farmers would be likely to lease in a given year, and while the augmentation was not sufficient to meet instream flow requirements, these results still indicate that the augmentation to flows could be large enough to be impactful. 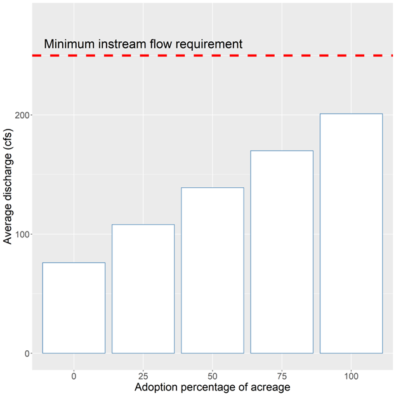 Figure 1. Streamflow augmentation with the adoption of a partial leasing strategy (18% of the water they would normally use on their corn and wheat crops)

As I mentioned earlier, there are some important challenges to the implementation of a partial leasing strategy for instream flow augmentation. For instance, it may not be suitable for fish if this strategy results in variable amounts of flow across years. In addition, partial leasing requires an accurate estimation of how much water the crops actually use (consumptive water use or evapotranspiration) to know how much water is available to lease. While recent advances in estimating consumptive use from remotely sensed data are resulting in the widespread availability of these estimates, it is still an open question whether or not they are accurate enough to support strategies such as partial leasing, especially the estimates at the beginning and end of the season that generally have lower reliability. Still, partial leasing can be viewed as one option in the toolbox for augmentation efforts, alongside a range of other strategies including improved irrigation efficiency, managed aquifer recharge, water conservation, enhancement of reconnection of spring-fed wetlands, voluntary water transactions for instream flow restoration, and managing forested areas to maximize snow and water retention. Partial leasing of agricultural water rights could provide a new way to reallocate water between annual crop growers and streamflow augmentation efforts, and one that could potentially benefit both farms and fish, which is becoming challenging under future climate at least in some watersheds.

The work that resulted in this post is part of “Technology for Trade: New Tools and New Rules for Water Use and Allocation in Agriculture and Beyond,” supported by the USDA National Institute of Food and Agriculture through project #1016467.