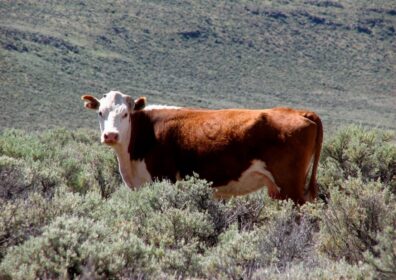 Extensive sagebrush steppe rangelands play a crucial role in the success of Northwest ranching operations, allowing livestock to graze throughout the spring and summer months on fresh forage. However, as wildfire frequency and size increase in sagebrush steppe due to climate change, burned areas of varying sizes within these rangelands will need to be rested as they recover. Ranchers and rangeland managers will need new, cost-effective methods of separating cattle from these sensitive, burned areas on public rangelands while still grazing neighboring unburned areas.

Virtual fencing presents a compelling climate change adaptation option for doing just that. Virtual fencing allows ranchers to control livestock distribution in rangeland landscapes without physical fences. Livestock wear collars that communicate with GPS and reception towers to form a virtual fence set by the rancher or land manager. When the livestock reach the limit of the virtual fence, auditory stimuli (often a series of loud beeps) emit from the collar. If livestock pass the fence limit, they receive a benign shock. Cattle have demonstrated the ability and tendency to rapidly learn the virtual fencing cues, eventually responding to the audio cue alone. Check out this article I wrote for the Northwest Climate Hub, where the rangeland scientists at the Eastern Oregon Agricultural Research Center (EOARC) I interviewed discuss their successful use of virtual fencing to prevent cattle from grazing recently burned areas within sagebrush steppe pastures in southeast Oregon, and some of the challenges they faced in doing so.