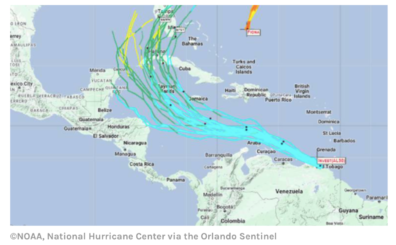 “It’s difficult to make predictions, especially about the future.” So goes an apparently ancient Danish aphorism also mistakenly credited to a wide range of humorists, from Yogi Berra to Mark Twain – and even to a Nobel Laureate, Niels Bohr. Whatever its origins, it is undeniably true. I will discuss an approach for hedging our bets against an uncertain future. I will start with an example where this is already being done, and then we can tackle soil carbon.

The residents of southwest Florida recently experienced the uncertainty of the future with tragic impact, as Hurricane Ian took its unexpected turn to the east destroying the communities of Sanibel Island and Ft. Myers Beach, which had not been evacuated with the same urgency as their neighbors in Tampa Bay, at the center of the prediction cone. In truth, however, there was some warning: the National Hurricane Center begun publishing and updating its “spaghetti model” predictions of possible trajectories—each wiggling line a path predicted by a different model, and covering a large swath of Florida—more than a week before landfall (Figure 1).

Why does the National Hurricane Center use so many models? Forecasters have learned that no single model (however sophisticated) is able to outperform the average trajectory across the leading models (what is called an ensemble of models), which are themselves run multiple times. All this extra effort is warranted because of the multi-billion dollar consequences and drastic loss of life associated with improper preparation.

How does this relate to soil carbon, though? Forecasting the impact of new practices on future soil carbon stocks is just as challenging as predicting the paths of hurricanes – perhaps even more so. Given this complexity and the growing awareness of the importance of soil carbon as a critical tool in mitigating future climate change, there is growing interest in predicting how soil carbon will respond to greater adoption of “climate smart agriculture” practices like cover crops and conservation tillage that help sequester, or capture and hold, more carbon in the soil (Figure 2). 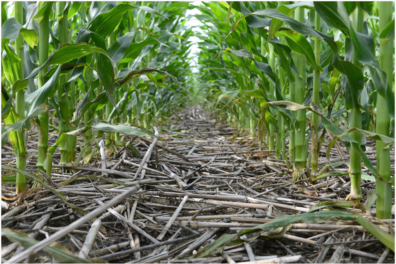 But how much additional carbon do these practices sequester, exactly? It turns out that we don’t yet know – certainly not across the myriad factors that are known to impact the rate of sequestration, including weather, soil type, cropping system, use of fertilizers and other inputs, etc. So this is the new journey we are proposing: explore the use of multiple models – not just one – to quantify how much carbon different climate smart practices help sequester, and under what conditions.

This modeling challenge has great prominence as a result of the many Climate Smart Partnerships recently announced by USDA (135, receiving $3.1 billion in public funding). The standard guidance from USDA to all projects is to use a single soil carbon model (COMET-Planner), while allowing some flexibility: “Alternative methodologies should be documented transparently, be based in peer-reviewed literature whenever possible, be replicable by third parties, and be available for other projects to implement.”

There is obvious convenience to the approach of using a single soil carbon model. However, what if this model turns out to be wrong? Just as with missing a hurricane trajectory, this is a multi-billion dollar decision – and can have far-reaching impacts if we fail to deliver the climate mitigation benefit that sequestering soil carbon could bring.

Why not consider the same ensemble approach utilized for hurricanes? Yes, it will be more complicated to use an ensemble approach. But several excellent models exist, and can be deployed in a manner that meets the USDA’s transparency and availability requirements. The fact that a multi-model ensemble is always better than any single model is a key outcome of the Agricultural Model Intercomparison & Improvement Project (AGMIP), whose co-founder, NASA’s Dr. Cynthia Rosenzweig, was the recent winner of this year’s World Food Prize (see Wallach et al., 2018 for a full statistical explanation). Given the billions of dollars now being invested in carbon sequestration projects and the drastic consequences associated with getting this wrong, it seems clear that embracing such an approach would be wise.

I serve as a project director at a research partner of WSU, the Conservation Technology Information Center (CTIC). We propose to launch a new workgroup with representation from across the rapidly expanding climate smart agricultural community to collaborate on the development and use of appropriate multi-model ensemble approaches to modeling soil carbon. We plan to include the research community, participants in the emerging agricultural carbon marketplace, policy-makers, foundations, and other relevant stakeholders. Such an effort would help ensure that the massive financial resources now being devoted to climate smart agriculture are efficiently deployed in a manner that actually achieves the intended purpose – to deliver the greatest possible climate mitigation benefit. Interested in joining this new workgroup? Please contact CTIC at soil-carbon@ctic.org. And stay tuned! As we tackle this modeling challenge, we will share what we find on how to better quantify the effectiveness of different climate smart practices for sequestering carbon in agricultural soils.

David I Gustafson, Ph.D., is an independent scientist who uses modeling to help food systems meet human nutrition needs in more sustainable ways. In 2020, he joined WSU in an Adjunct Research role and now resides in Bellingham. He also serves as a project director at CTIC, which partners with WSU on research topics of mutual interest.