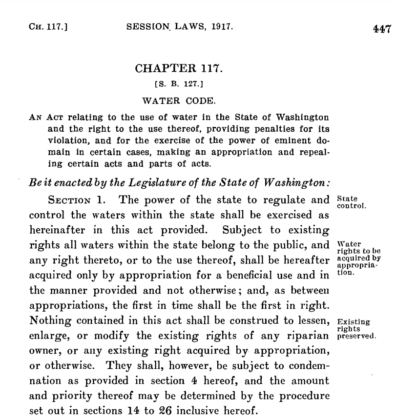 WSU researchers are examining water markets and barriers to their adoption as a potential strategy to adapt to climate changes. Those implementing water markets must navigate legal and administrative complexities, a big one being the need to treat water resources as both a public resource and a private property. The State of Washington holds water as a natural resource in trust for its residents, the public. Individuals or entities can then use water by securing a water right, or the right to divert a specified amount of water at a particular site and for a defined use (for example, municipal, irrigation, flows for fish, industrial). A water right is authorization to use water in a prescribed manner, not to own the water itself.

These complexities understandably lead to complicated and conflicting views about how water should and should not be transferred through water markets. Indeed, when irrigators in the Okanogan, Methow, Walla Walla and Yakima river basins in Washington State were asked two questions (via the 2021 Water Management Survey) to gauge how they thought about the balance between water rights as private property and water as a public natural resource, responses were split, and in some cases even contradictory.

Researchers first asked whether respondents agreed with this statement gauging perspectives on water as a private property right: “Water should be put to use according to the desires of the owners of water rights.” Seventy-one percent (71%) either agreed or strongly agreed with this affirmation of private property rights. Researchers then asked about this statement on water resources as a public good: “Water transfers that involve water leaving the County should be prohibited, regardless of how valuable the water may be to users outside the Basin,” and 64% agreed or strongly agreed. Interestingly, 49% of respondents agreed or strongly agreed to both statements about protecting property rights and preventing out of basin transfers, exemplifying the complexities of a resource allocation system that is both public and private. 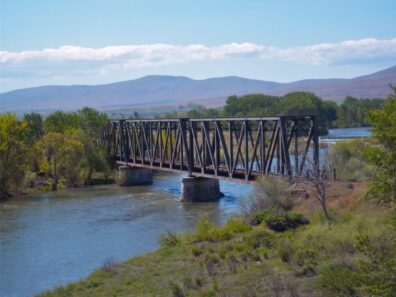 The Yakima River is a tributary of the Columbia River named for the indigenous Yakama people. Irrigated agriculture – including pastures, orchards, grapes, hops, and field crops – is the economic base in the basin. A significant portion of Washington apples and cherries are grown in the valley, as well as most (75%) of the United States’ hops. Photo: Dana Pride.

These contradictory responses may make more sense when put in context. A decision to trade water between use types and basins can have far-reaching impacts. For instance, transporting water from a rural area out of basin to a city may provide water to sustain the city’s population, but it can also contribute to a decline in agricultural productivity and the farming community that is built around it. And because water rights, once transferred downstream, normally cannot be transferred back upstream, the transfer may facilitate more rapid growth in the importing city while also preventing future economic development opportunities of the exporting rural area upstream. In this way, it is not surprising that survey responses are contradictory; such implications must be weighed when considering water market transactions. Navigating these complexities will likely become more challenging as droughts become more frequent and irrigators feel the increasing impacts of a changing climate.