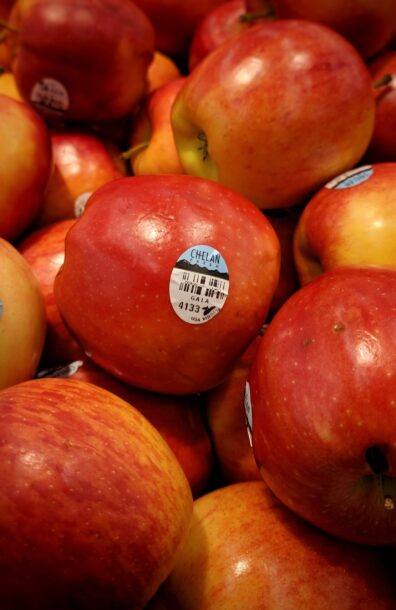 Washington state produce can be found in supermarkets across the world. These Chelan apples were found in Kuala Lumpur. Photo: Flickr user Dennis Sylvester Hurd, under CC0 1.0 Universal

Washington State has nearly 15 million acres of farmland with around 39,000 operating farms, each producing necessary agricultural commodities. A few of the most well-known crops that are produced and distributed from Washington State are apples, cherries, hops, raspberries, and pears. Even when traveling across the country, I can find Chelan apples, which shows just how productive the state is in their cultivation of high value foods. Many of the 39,000 operating farms require irrigation to produce much of the aforementioned fruit that get distributed far and wide, which consumes a large portion of water resources.

As temperatures rise, the impacts of climate change on agriculture become increasingly apparent. For example, higher rates of sunburn due to atmospheric water stress and drought. The excess stress being put on crops and growers as they try to produce high quality crops in the changing climate is only going to become more severe. The increased frequency of drought limits water resources, access, and availability in the arid Western states, which is becoming concerning, especially for beginning and small farmers. Complex water regulations decrease the reliability of irrigation for small producers which can threaten crop cultivation in summer months. Increased temperatures throughout the year create lower snowpack, which then melts earlier, and is not available later in the season when crops and growers need it the most. Even though this stress is more apparent for smaller farms, the issue can be universally seen in all agricultural systems, small and large. Another challenging aspect when considering irrigating the thousands of farms across the state is the cost: cost of water, cost of labor, and cost of irrigation management. 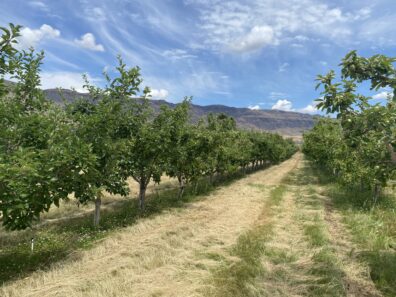 A potential solution that can help conserve water, reduce irrigation costs, and secure irrigation water for small and large producers is regulated deficit irrigation (RDI). This summer in my undergraduate research internship at the WSU Wenatchee Tree Fruit Research and Extension Center, I am conducting an RDI experiment in cider apples. Regulated deficit irrigation is purposeful reduced irrigation that puts stress on trees or the desired crop but does not negatively impact the growth and production of the crop. This can also be beneficial in different crops such as Honeycrisp apples and grapes, as RDI not only decreases vegetative growth but can also improve fruit quality (which I will discuss further in an upcoming article). 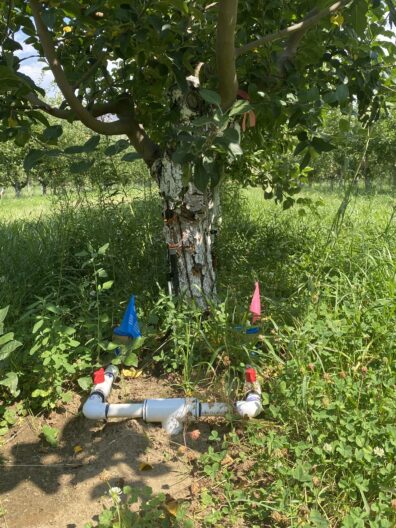 Throughout the summer, I have been running irrigation treatments on two different cider apple cultivars: an RDI treatment as well as a control treatment in Nehou and Golden Russet cultivars. The RDI trees are watered at approximately 60% of what the control is watered. For example, the control groups will get a three-hour set twice a week while the RDI groups are getting two-hour sets twice a week. At the end of each week, I have been collecting midday stem water potential—a measure of how much stress the tree is experiencing—of each of the trees to determine their levels of stress and how long to water in the following week. Preliminary results are showing that the RDI trees are experiencing more stress than the control trees, but not so different that they will have drastic differences in appearance. The team will know more about the fruit quality effects of the RDI after harvest in September.

Regulated deficit irrigation practices have the potential to be a useful tool to conserve water, which in turn can help ensure reliable water for both small and large producers. Water conservation is becoming increasingly important as climate change brings longer and more prominent drought seasons and high temperatures. However, it is important to note that changing practices such as irrigation can be difficult. Crops might react differently to deficit irrigation, and it may take more work to monitor tree stress to determine how much deficit is appropriate. There could also be other potential unanticipated drawbacks to using these techniques. However, even with these potential disadvantages, using less water with regulated deficit irrigation could save a significant amount of money, improve fruit quality, and conserve water in the increasing times of water stress, making it all worthwhile.