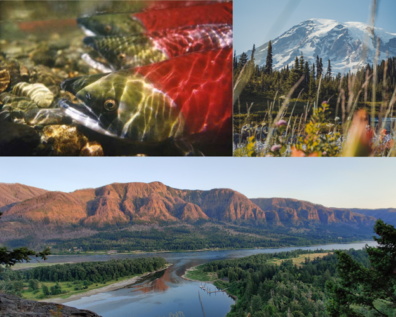 Pacific Northwest resources that are susceptible to climate change. Upper left: sockeye salmon are susceptible to warming stream temperatures brought on by climate change. Image credit: National Park Service. Upper right: Snowpack in the region, like that seen on Mt. Rainier is declining as temperatures rise. Photo: Ashlynn Murphy, Unsplash. Lower panel: Demand for water is rising and stresses on supply are exacerbated by climate change meaning the Columbia River and other important water bodies are likely to experience declines in streamflow. Photo: Elian Sarkinen, Unsplash.

Let’s examine the expected consequences of climate change on water resources in the Pacific Northwest. By mid-century, spring snowmelt in the region is expected to occur three to four weeks earlier and summer streamflow is expected to decline. In the Cascades, measurements of snowpack on April 1 have already declined by as much as 20% since the 1950s. At lower elevations, more precipitation will fall as rain instead of snow which increases flood risks, and reduces snow accumulation and soil moisture, increasing wildfire risk in the following months. Demand for water by the region’s inhabitants is rising and is expected to continue to do so and climate change will exacerbate stresses on water supply. Lower streamflow could also reduce hydropower supply which could cause economic losses in the region. Climate change will also warm the region’s waters which have been noted to increase spring and summer mortality in Chinook and sockeye salmon. All aquatic species will also be impacted by reduced summer flows and increased flooding and winter flows. Finally, these changes to water supply will undoubtedly impact the region’s agriculture and could harm crop yields, as I discussed in a recent article.

This is but one example of the complex challenges and considerations potentially faced by our social, environmental and technological systems (which are interconnected, and collectively called SETs) in the Pacific Northwest and more broadly across the globe. The myriad, complicated challenges faced by SETs will require adept responses — and in some cases transformation — for successful adaptation. Traditionally, our municipal, state, or even federal government have addressed the negative impacts of interaction between society and environment largely through bureaucratic management and regulation. However, in a recent study, University Distinguished Professor Emerita Barbara Cosens from the University of Idaho and her fellow researchers from across the United States and the European Union (brought together by the NSF funded National Socio-Environmental Synthesis Center, SESYNC) posit that these traditional forms of government lack the flexibility and adaptability to quickly respond to the fast-paced and dynamic issues that we are facing today. Instead, the authors discuss the need for adaptive governance—a form of governance that involves self-organization of both the private and public sectors and formal and informal institutions that can fill roles in addressing the challenges SETs face. Within an adaptive governance framework, actors such as non-profits, community groups, and private stakeholders (e.g. businesses, concerned citizens) could interact with local and regional governments to engage in solution-oriented responses to environmental and social change.

That sounds great, but what does it actually mean? How would it work? Let’s focus again on the Pacific Northwest’s water resources. The response would incorporate entities at the local level to effectively respond to the fast-paced and chaotic nature of change. For example, government might set goals to reduce consumptive water use, but rather than mandating such changes, it would build local capacity for residential customers, farmers, and others to choose their own means of change through providing funding, resources, and other support. Local non-profits and industry could also be incorporated in these efforts to spur adaptation. There could also be an emphasis on monitoring progress and incorporating the local knowledge of farmers and other stakeholders as efforts are undertaken to adapt. By continually monitoring progress towards goals, management could be adjusted accordingly in a collaborative process between government, farmers, and other stakeholders that would ultimately lead to a greater likelihood of positively adapting to the changes that climate change will bring to the Pacific Northwest’s water resources. 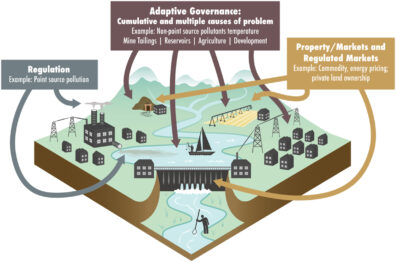 Figure 1. Depiction of a modern watershed illustrating another example of the dynamics of a SET that will require a multi-pronged governance response. Discrete pollution discharges, such as those from the factory and sewage plan in the image above, can be appropriate targets for simple regulation. However, given the complex nature of the issues and dynamics at play, current laws and governing bodies are often too limited in focus to manage all the interconnected problems within SETs such as those caused by point and non-point source pollution. Taken from Cosens et al. (2021), originally published in PNAS. Illustration: Megan Caye Ashe (Washington State University, Pullman, WA).

While traditional forms of government alone cannot effectively adapt to the dynamic changes within SETs, they do possess strengths that will be integral to emerging adaptive governance approaches. For example, centralized governments could bolster societal goals through subsidies, tax breaks, and research funding to support necessary adaptation. This could take the form of supporting renewable energy, investing in habitat connectivity for valued species, or funding research aimed at improving the adaptive capacity of communities to wildfire, water stress, and other environmental challenges sparked by climate change.

Traditional government can also use its tools to ensure that legitimacy, equity, and justice are supported within adaptive governance. Without external oversight, such as a government that is accountable to the whole population, interests of certain groups could be overlooked or ignored, delay tactics benefiting the status quo could flourish, and certain innovative solutions may be compromised.

Environmental and sociological issues in the Pacific Northwest and across the globe are more complex and dynamic than ever before, given the fast pace of change and the interconnectedness of the modern world. In this era, adaptive governance is more capable of responding to environmental change than traditional governmental structures alone, and may be an important tool for effective adaptation.

This work was developed under the Adaptive Water Governance (AWG) Project, funded by the U.S. National Socio-Environmental Synthesis Center (SESYNC) under funding from the U.S. National Science Foundation, NSF DBI-1052875, and by AWG 2.0 with support from SESYNC;  by the research project “Adaptive Capacity for Sustainable Blue Growth” (BlueAdapt) funded by the Strategic Research Council at the Academy of Finland (decisions 312652 and 312747); and jointly by the National Science Foundation under EAR grant #1639458 and the U.S. Department of Agriculture’s National Institute of Food and Agriculture under grant #2017- 67004-26131, as well as the Washington State University Graduate School.