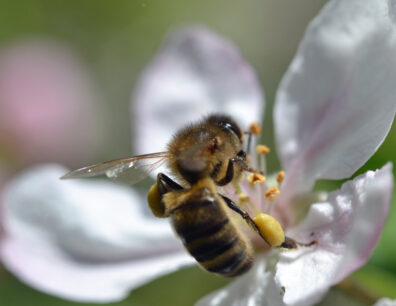 Pollination is key for all crops to survive and produce seeds, fruit, and grains. Photo: Flickr user Conall under CC BY 2.0

Throughout the last year, I have spent hours researching and writing about molecular techniques to combat heat and drought stress in agricultural crops while completing my undergraduate capstone project. So, when I found an article describing how the integrity of pollen is threatened by increasing temperatures, it seemed extremely relevant to both my project as well as my new internship at Washington State University where I am researching sustainable ways to address climate change impacts on tree fruit.

Temperatures above 90o break down the proteins that power the metabolism of pollen grains, hindering pollen tube formation and pollen growth. This article describes how for small growers in the Pacific Northwest such as Aaron Flansburg, the sweltering early summer temperatures in 2021 reduced pollination and yield of his canola plants. Instead of getting 2,700 pounds per acre like he would in a normal year, he was only able to harvest 600-800 pounds per acre to press into canola oil. Having a molecular breakdown of pollen proteins due to heat stress can be seen in many other crops as well: tomatoes, blueberries, and pulse crops to name a few. The article also talks about Jenna Walters from Michigan State University and Gloria Muday from Wake Forest University who have been investigating different ways to improve pollination under higher temperatures. A few ways they discussed were finding genes and molecular mechanisms to help with heat stress and breeding crops to withstand extreme temperatures. Check out some other ways researchers are attempting to reduce the breakdown of pollen and the potential effect of high temperatures on bees and their ability to pollinate crops. This developing research is important to many crop growers in the Pacific Northwest as temperatures continue to rise and the integrity of pollination diminishes. 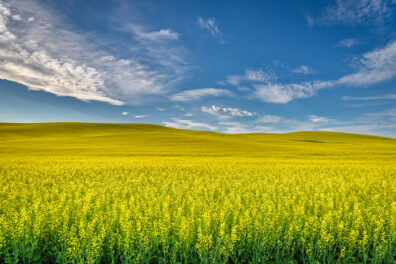 Canola growers in the Pacific Northwest will face pollination challenges as the temperatures rise. Photo: Diana Robinson under CC BY-NC-ND 2.0