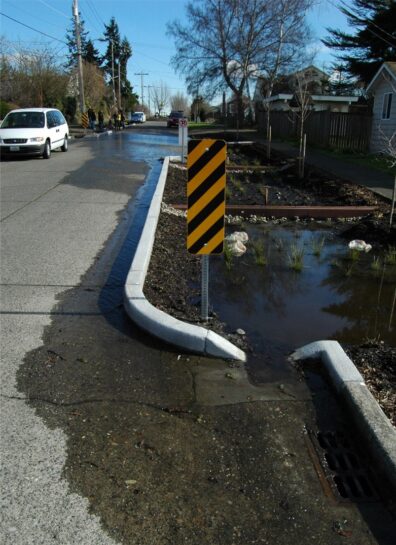 There is a bright spot on the horizon, though. A charcoal-like product known as biochar has potential to address these issues when used in stormwater management. Biochar is formed when biomass is heated under low or no oxygen conditions in a process called pyrolysis. By limiting the oxygen level, you limit combustion and the release of carbon dioxide during biochar production. The resulting material has a stable, carbon-rich structure which resists being degraded for hundreds to thousands of years, keeping the carbon locked in place. Previous AgClimate articles have discussed biochar’s potential as a means of carbon sequestration or as an additive in the composting process, and we are actively researching its use as a treatment for stormwater. In my graduate research with Dr. Anand Jayakaran, I have been looking into how biochar can be used as a partial replacement of compost in bioretention media (Figure 2) to improve removal of bacteria and certain toxic organic contaminants from stormwater.

Biochar is similar to activated carbon (also called activated charcoal), which is used for water purification both in the Brita® filter in your fridge and in your local wastewater treatment plant. Both materials are highly porous, which gives them an enormous internal surface area: one gram of activated carbon or biochar can contain thousands of square meters of surface area. Contaminants adsorb, or stick, onto these internal surfaces, which is how these materials remove contaminants. 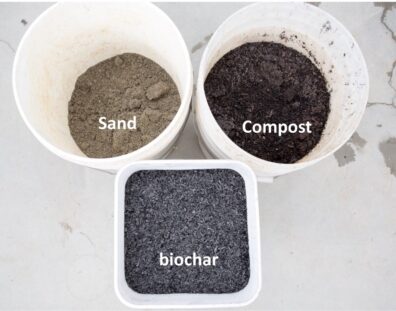 The primary way biochar can be used in stormwater management is through amendment or replacement of engineered media in raingardens, bioretention systems, bioswales, or even green roofs. Engineered media are typically mixtures of mostly sand—for rapid infiltration of stormwater—combined with smaller amounts of organic material, so they often lack adequate water holding capacity to support plants and the pore space to trap contaminants. In contrast, biochar’s vast pore space (Figure 3) gives it high water holding capacity and abundant sites for  contaminants from stormwater to attach to it. Researchers have documented improved removal of metals, organic contaminants, pesticides, nutrients, and bacteria from stormwater when biochar is added to engineered media.

There has been particular interest in using biochar to improve removal of bacteria from stormwater. Bacteria removal is tricky partly because the nutrients and carbon sources present in both stormwater and stormwater treatment systems facilitate bacterial growth. In our study, we added biochar to bioretention media, and found that a 50% replacement of compost with biochar resulted in significantly higher rates of E. coli removal. Several other studies (Mohanty and Boehm, 2014; Mohanty et al., 2014; Valenca et al., 2021) have also shown significant improvements in removal of E. coli when biochar is added as an amendment to bioretention media mixtures. This is due to the increased surface area of biochar and the interactions between the surface properties of biochar and bacteria cells. 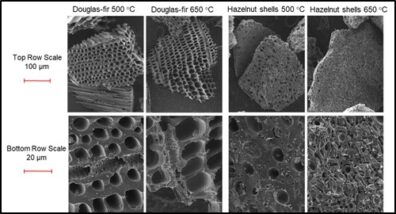 Biochar can also help manage stormwater volumes. Biochar can hold a much larger volume of water in its vast pore space than sand or compost, increasing the water storage capacity of bioretention systems while still promoting infiltration of stormwater into soils. In a recent webinar focused on use of biochar in stormwater management, Chuck Hegberg noted that the addition of biochar to a highway greenway increased the ability of the system to capture and infiltrate peak storm flows by 77%.

Though the potential benefits biochar could bring to stormwater management are very exciting, there are some challenges to implementation. The contaminant removal and water storage properties of different biochars can vary greatly, depending on the feedstock, pyrolysis temperature, and production process used. Whenever possible, biochars should be tested on a pilot scale when being implemented for stormwater management.

While there are still some challenges inherent to using biochar for stormwater treatment, this material holds a lot of promise for adapting green stormwater infrastructure to a changing climate. Larger precipitation events are expected with climate change and stormwater infrastructure will need to be capable of managing increasingly intense storm flows and pollutant loading. Biochar has the potential to increase the runoff storage volume of bioretention media while simultaneously improving pollutant removal. If implemented at scale, using biochar in stormwater management systems could provide new opportunities for sequestering carbon, adding additional environmental benefit to these systems.

* The Washington Stormwater Center works to provide stormwater management solutions and leadership through research, training, and education. We envision a future where communities are knowledgeable about stormwater research and apply planning and tools to minimize flooding, protect clean water, and promote thriving ecosystems. Whether you’re a municipality implementing a stormwater program, a business owner who needs to meet permit requirements, or a citizen scientist concerned with the environmental implications of stormwater on Washington’s water bodies, we strive to provide an extensive collection of resources and expertise on all aspects of stormwater. Visit us online and sign up for our monthly newsletter in cooperation with the WSU Water Research Center.

One thought on “Cleaning Stormwater with Sequestered Carbon”