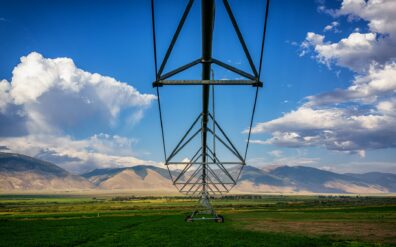 The Yakima River Basin is a snow-dependent, agriculturally important region in Washington state, leading in production of many commodities and specialty crops. Nearly 50% of agricultural production in the Yakima Basin is irrigated, and is vulnerable to future expected temperature increases and severe droughts. Researchers at Cornell and Washington State Universities, led by Dr. Keyvan Malek, evaluated the impacts of changes in temperature, water availability, and atmospheric carbon dioxide concentrations on irrigated agriculture in this Basin and examined the effectiveness of potential strategies to mitigate the negative effects on crop yields.

The Yakima Basin receives most of its water supply from melting snowpack. A warmer climate reduces snowpack volume as more precipitation falls as rain. Higher temperatures also accelerate snowpack melting, causing water availability to shift towards earlier in the year, with less water available later in the irrigation season. Malek and colleagues modeled future water stress due to climate change in two time periods: around 2040 (2030 – 2060) and 2070 (2060 – 2090). Their results suggest that there will be an increase in the amount of unmet irrigation demand due to higher temperatures’ effect on snowpack. Specifically, significant droughts, defined in this study as unmet irrigation demand reaching greater than 30%, are expected to become more frequent and severe in both future time periods (Figure 1). Further, some drought events could reach greater than 65% unmet demand in the Yakima Basin, which has never occurred before in the historical record. 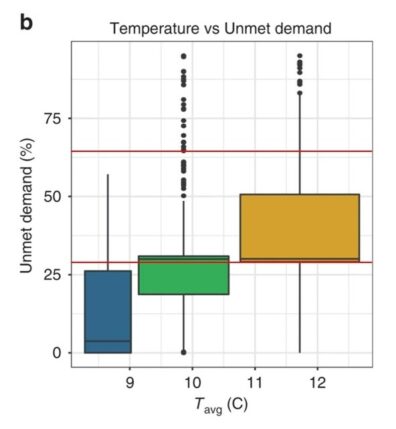 Figure 1. How unmet demand responds to temperature for the 1980 – 2010 historical period (blue), a moderate climate change scenario (green) and a high emissions scenario (yellow) in the future period of 2030 – 2090. Each box on the x-axis is aligned based on temperature for that scenario. Red lines were added to the original image to illustrate the 30% and 65% unmet demand thresholds. Adapted from Malek et al. (2020); originally published in Nature Communications.

What could this mean for agricultural production in the Yakima Basin? Malek and colleagues focused on the ten top crops in the Basin, and grouped them into annuals (winter wheat, spring wheat, corn, and potatoes), multiple-cutting crops (alfalfa and pasture), and tree fruits (grapes, apples, cherries, and pears). They calculated impacts on yields for each group, and all three groups show possible reductions in average yields under future climates. The frequency of low-yield years–defined as years that produce under 60% of the fully irrigated yield–could also substantially increase with climate change. Interestingly, the year to year variation in yield is not necessarily expected to increase over time, likely due to expected decreases in the maximum yields. Smaller yield variations would allow predictions of yield loss to be more accurate.

So what can be done to prepare for what’s coming? One strategy that Malek and colleagues tested is using crop varieties that have longer growing seasons. Using these varieties increases average agricultural yield, but they remain vulnerable to more frequent and severe drought. In addition, the variability in yield also increases, meaning that both agricultural production and farmers’ revenue are likely to become more volatile: as crop varieties become more productive during years with adequate water supply, the gap between yields at full irrigation and during water-stressed conditions could increase.

The increase in yield variability could cause unintended costs such as the raising of insurance rates to cover the greater unpredictability in yields. Such costs are placed either on the public in the form of government-backed agricultural insurance programs, or on the farmers themselves if they pay for private insurance. To combat this issue, the potential productivity of crops could be improved with practices or varieties that emphasize making crops more resilient to variations in temperature and water supply. 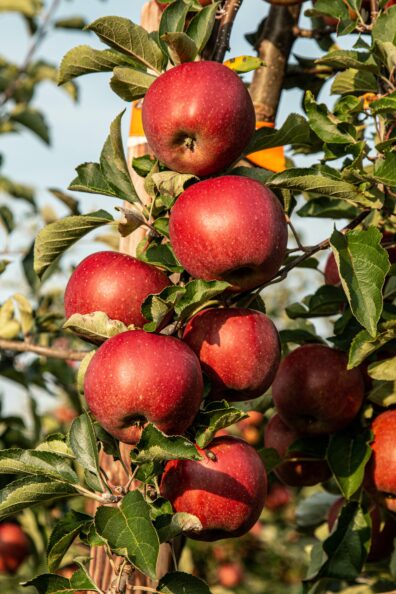 Apples, one of the main commodities grown under irrigation in the Yakima Basin. Credit: Marek Studzinski, Unsplash.

Malek and colleagues discuss policy-related changes, such as the enhancement of water-related infrastructure and institutions to improve water availability, that would also be needed to ensure sustainable regional agricultural economies in snow-dominated regions under climate change. This could include building water storage facilities and adapting water rights. While they did not specifically model the outcomes of such improvements, they theorize that these changes will help mitigate the expected rises in unmet irrigation demand. In all likelihood, multiple strategies will be needed to adapt to the coming changes in water availability, and their implementation will require action by agencies that manage water projects and those involved in the relevant governance and regulatory frameworks, in addition to the growers themselves.

This and other work strongly suggest that climate change is likely to have a large impact on water supply in the Yakima Basin, which will have important consequences for irrigated agriculture. Growers will need to adapt to decreases and shifts in water supplies. In addition, there is an increasing trend in the consumption of fresh fruits and vegetables as the standard of living increases, which may also interplay with changes in supply. Water managers, policymakers, and those in the agricultural industry may need to work together to address climate change impacts and the increased volatility resulting from likely adaptation strategies, such as improving water-related infrastructure and institutions in addition to investing in increasing potential productivity of crops.