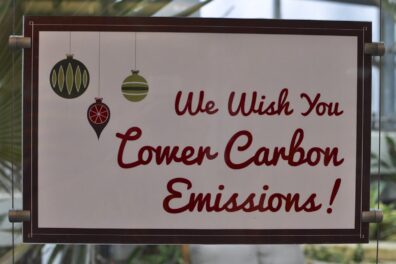 Certain carbon markets could provide a win-win for producers and environmental interests pursuing reduction in emissions. Photo: Scott McLeod under CC BY 2.0.

The ability to store carbon in soils—to sequester carbon—has been receiving increased attention lately, including on AgClimate.net. Recent posts included articles about potential for croplands in the inland Pacific Northwest to sequester carbon and an article on the emerging carbon markets and their relevance for fruit and vegetable producers. Carbon markets offer the promise of monetizing the benefits of practices that add carbon to the soil, and are also good for soil health. If these markets are effective, they would provide a win-win for producers and environmental interests.

Thanks to the wonders of a zoom-friendly world, I recently attended a mini-workshop hosted by the University of Florida and the Institute of Food and Agricultural Extension where we explored carbon markets. After an introductory presentation, Debbie Reed, the Executive Director of the Ecosystem Services Market Consortium gave a presentation titled “Carbon Market and Trends.” Here are some highlights that I found particularly important to consider related to the future of carbon markets.

Why has there been a sudden interest in carbon markets and agricultural credits?

During the latest COP26 Climate Change Conference in Glasgow, private companies made significant commitments to reduce emissions. According to Reed, there has never been that level of corporate interest in carbon credits. The proliferation of interest from the private sector in net zero initiatives (for example, the U.S. Dairy Net Zero Initiative, and commitment by McDonalds)—in addition to the interest of governments—means that there will be an estimated $100 billion in demand for carbon credits by 2030, according to the global Taskforce on Scaling Voluntary Carbon Markets.

There’s new movement in private markets looking at the greenhouse gas inventories of food and beverage corporations. For these corporations, often 90% or more of greenhouse gas emissions come from agricultural supply chains, creating a significant focus on agricultural emissions, emissions reductions and market opportunities for agriculture in the broader category of Natural Climate Solutions. While the impact on specific agricultural producers is not yet entirely clear, for some producers there may be a “pull” toward emissions reductions as processors and other companies in the supply chain attempt to reduce overall emissions. 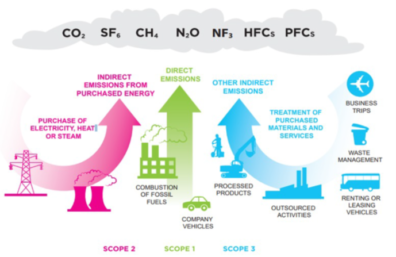 Figure 1. Scope 1, 2, and 3 are focused on different sources of emissions. There has been recent focus on scope 3 emissions, which include indirect emissions from supply chains. (CC BY 4.0, Modified from World Resources Institute Greenhouse Gas Protocol)

Carbon offset markets have existed for about 25 years. When an entity creates a carbon credit by reducing emissions, that credit can be sold across political boundaries and sectors, allowing equivalent emissions elsewhere. Monitoring requirements are variable, but generally require 20-100 years of monitoring.

In contrast, Scope 3 Supply Chain Impact Units is a new type of carbon market, which are still in development. The major difference is that these credits represent absolute credits (i.e., no emissions occur elsewhere) and cannot be sold across sector or government boundaries. The term “insets” has been used for these markets. Unlike carbon offset markets, these markets require monitoring in perpetuity. Since offsets and insets compete, until changes are made by standards bodies to bring monitoring requirements into alignment, this competition will impact efforts to reduce net emissions.

Reed also spoke about changes in the way that the Ecosystem Services Market Consortium views these markets. Their markets are moving away from just looking at carbon, and more broadly taking into account other ecosystem services such as water quality, water quantity, and biodiversity impact (which Reed referred to as “stacked credits”; Figure 2). 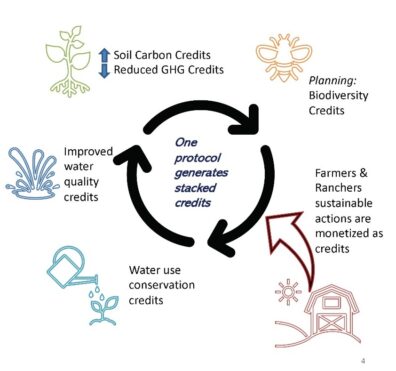 Protocols developed in carbon offset and inset markets are exclusive to regions and production systems. For example, the Ecosystem Services Market Consortium’s current work in the Pacific Northwest is only specific to grazing systems in Oregon that are part of the Carbon Farming Ranching Pilot Project. Stay tuned, however, as future work is planned relevant to Pacific Northwest hay/alfalfa, barley and potato systems.

There has been a huge growth in markets, increasing the urgency and the importance of ensuring integrity, credibility and fungibility (tradability) of the traded carbon credits. There are global standards and enabling bodies working on these characteristics. Some examples of different bodies in this space include Greenhouse Gas Protocol; SBTi and SBTn; Climate Action Reserve, Verra, just to name a few. The standards and enabling bodies will continue to evolve in response to the need to achieve Net Zero, using science-based inventories, target-setting, and then accounting and reporting. According to Reed: “Civil society is driving the evolution, but the impetus is shareholder, stakeholder, consumer, and societal demand, including for transparency that actions are real. It  is the evolution of the license to operate in a manner that meets societal environmental, social and governance needs.” However, as Dave Gustafson mentioned in his recent article, these markets are not quite at a point where there’s a straightforward entrance into them for most Northwest agricultural producers. But, since there is currently investment occurring in this space (e.g. USDA’s Partnerships for Climate-Smart Commodities), it will be worth keeping an eye on evolving policies and markets.