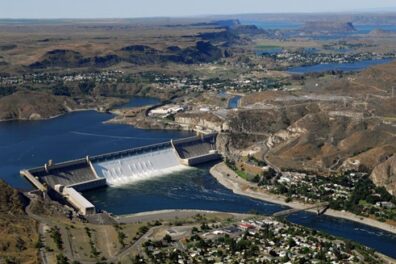 The Grand Coulee Dam is one of a system of dams on the Columbia River used for water storage, energy production and flood control. Credit: Bureau of Reclamation.

Reservoirs are common infrastructure across the globe, with myriad benefits and costs attached. In the Pacific Northwest, for example, reservoirs are used for water storage, energy production, and flood control, but they impact salmon by blocking passage to spawning and rearing habitat and also lose water to evaporation. However, few people know that reservoirs are also a significant source of greenhouse gases, releasing emissions on the scale of thousands of teragrams (Tg) per year, globally. For reference, the entire U.S. usually emits between six and seven thousand teragrams of greenhouse gases each year. Estimates of reservoir emissions have remained uncertain, though, making it hard to find ways to reduce these emissions. Dr. John Harrison from Washington State University teamed up with colleagues from the University of Quebec at Montreal to try to narrow down estimates of global reservoir greenhouse gas emissions, which could help pinpoint where limiting emissions would be most helpful and illuminate specific methods for doing so.

In the past, global greenhouse gas emissions from reservoirs have been estimated by measuring emissions at some reservoirs and then extrapolating to the global scale by simply multiplying by global reservoir surface area. This approach, while useful for rough estimates, assumes that reservoirs behave similarly in different places and at different times. Harrison and colleagues took a different approach, using the G-res model, which has been used to predict greenhouse gas emissions of individual reservoirs, to predict reservoir emissions on a global scale. Using the G-res model is an improvement over previous approaches, as it provides separate estimates of natural and anthropogenic carbon dioxide (CO₂) and methane, and it limits the overestimation that is common in previous approaches.

This model also breaks down reservoir greenhouse gas emissions into three main fluxes, a critical step for determining how to reduce emissions. Degassing occurs when a body of water goes through a release of pressure and releases gas. Diffusion is the movement of a dissolved gas from an area of a high concentration to one of a low concentration, and ebullition is the release of gases through bubbling. The G-res model produces estimates for each of these fluxes for methane and also for diffusion of CO₂, which is an unprecedented level of detail for a globally applicable approach.

The G-res model produced an overall global flux estimate of greenhouse gas emissions from reservoirs of 1,076 Tg CO₂ equivalent per year (Table 1). This is similar to the amount of emissions that come out of all the light duty vehicles in the U.S. per year and is one of the largest ever reported for reservoir greenhouse gas emissions across the world. Let’s focus on methane emissions, which are the largest. Only 7% of methane emissions are from diffusive methane fluxes. In contrast, ebullition and degassing fluxes account for 38% and 55% of the global methane flux, respectively. Yet diffusive methane fluxes have previously received the most attention. The fact that these results quantified the fluxes separately can therefore help guide pathways to limit these emissions, as different fluxes can be controlled in different ways. Degassing, which occurs at high rates when water is drawn from the lower depths of a reservoir, could be greatly decreased by drawing water from well-oxygenated, near surface portions of a reservoir’s water column. If all methane degassing from reservoirs was eliminated, global greenhouse gas emissions from reservoirs would be reduced by 31-52%. Such limits on methane emissions could be extremely worthwhile as methane is about 25 times more potent than CO₂ at trapping heat in the atmosphere in the short term.

Harrison and colleagues also studied patterns in reservoir emissions across different regions of the world. In general, there are greater per area fluxes of greenhouse gases from reservoirs in the tropics and subtropics, and specifically, more methane was released close to the equator (Figure 1). Relatively few dams had large methane degassing estimates, but those that did were typically found near the equator and had extremely large amounts of methane degassing. Focusing on limiting degassing in these relatively few reservoirs could therefore have a large impact. Importantly, the majority of new reservoir construction is also expected to take place in the tropics and subtropics, so their design and construction could target limiting reservoir greenhouse gas emissions as well.

Estimates of emissions are generally lower in the Pacific Northwest, but we are not off the hook. Currently, the majority of reservoir emissions in the Pacific Northwest come from CO₂ diffusion and methane ebullition. The solutions to these sources of emissions are less straightforward, but research shows that changing the operating level of reservoirs could decrease methane emissions and that methane ebullition is increased by higher sediment temperatures. These detailed results therefore provide key information that can help water managers and policymakers evaluate approaches to effectively lessen the carbon footprint of reservoirs in our region.