Water. H 2 O. It’s the dominant molecule of our lives. We are 60% water (on average). Life as we know it is only possible because our planet has so much water. We can survive a few weeks without food, but only a few days without water. The oceans are believed to have formed around 4 billion years ago, and so are nearly as old as the planet itself. The hydrologic cycle—the series of processes by which water evaporates from those oceans, condenses as clouds, and then returns to the earth as freshwater—forms the primary basis for our existence. 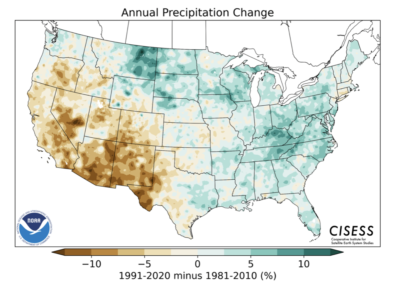 Water is actually the most important greenhouse gas: without water in the atmosphere, the average temperature of our planet would be around 0°F… a mammoth version of those chic, spherical ice ‘cubes.’ But the average temperature of the earth is 60°F and climbing. As the world’s oceans continue to warm, water evaporates more rapidly, and the hydrologic cycle accelerates. All that water must come back down somewhere, so annual precipitation levels across the planet are also increasing. But rain and snow fall very unevenly, so not every part of the country is getting more precipitation, and extremes on either end of the moisture spectrum are increasing (the dry is getting drier and the wet is getting wetter). According to climate models, certain deserts will expand, such as the American Southwest, where both models and observations show a decrease in annual precipitation (Figure 1).

Climate models report that droughts of all kinds (temporary or multi-year droughts) could become more frequent and extreme. But the ‘new normal’ (a term made tragically popular by COVID) is a world in which heavy rainstorms will also inevitably become more intense and more frequent, a feature of climate change that is likely to cause the most damaging impacts. This includes extreme events that cause severe damage to farming systems, as just experienced where I now live, in Whatcom County, Washington. Tucked away in the northwest corner of the state, this county leads the nation in blueberry production, a productivity matched by fields just across the border in British Columbia’s Fraser River Valley, which experienced even more widespread devastation from the recent torrential rains (Figure 2). The Bellingham airport reported 14.57” of rain for November 2021, the most for any month since record-keeping began. 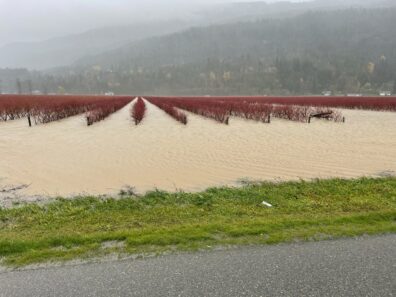 As disheartening as such scenes are, they are completely overshadowed by the ghostly images from an extreme event earlier in our nation’s history, the Great Flood of 1862 (Figure 3). That extreme event inundated California’s entire Central Valley, an area that is now the source of more than half the nation’s fruits and vegetables, nearly all the world’s almonds, and many other popular foods. As detailed in Tom Philpott’s new book, Perilous Bounty, the 1862 floodwaters reached from California’s coastal range all the way to the Sierra foothills. Approximately 10 feet of precipitation fell across the entire state over a period of 43 days, or about eight times the record amount of rain that Bellingham received last month. The valley was then sparsely inhabited and the only farming of significance was cattle ranching, so the death toll was limited to around 3000 people and perhaps a quarter of a million livestock. 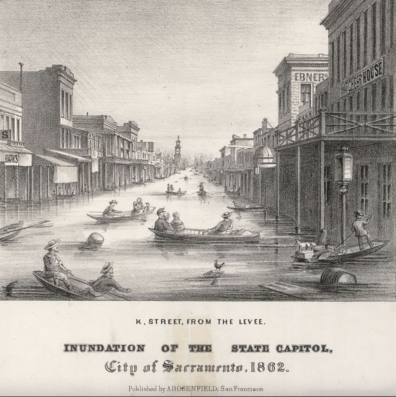 But what is horrifying is that scientists believe an event of this magnitude has happened every century or two over the past few millennia, meaning that another is now overdue. The climate models have difficulty predicting such extreme events, but it’s not implausible to conclude that they should increase in frequency and intensity, just as all other heavy rainstorms have been predicted and observed to behave. For instance, as reported in the most recent US National Climate Assessment, the frequency and intensity of heavy precipitation events across the county have increased more than average precipitation and are expected to continue to increase over the coming century.

What can we do to better prepare? There are a range of actions to consider, from infrastructure to diversification—and at a variety of regional scales, from the individual operation all the way up to national policy. For one, we should be cautious about removing the dams that help mitigate flood damage. As for cities and farms now in harm’s way, we can no longer simply ‘head for the hills,’ as was the learned wisdom of the land’s indigenous peoples. It’s clearly a time to ensure that levees and other protective infrastructures are enhanced to deal with more intense downpours—even here in the West, where we are more accustomed to mitigating the effects of drought rather than recovering from floods. Food supply chains should be intentionally diversified to reduce system vulnerability. And although it won’t help in widespread, catastrophic events, individual producers can boost soil resilience to localized extreme storms by adopting continuous no-till and winter cover crops wherever possible, which may also help them participate in carbon markets. Basically, Extreme Adaptation will be as essential for everyone to embrace in order to survive the ‘new normal.’ Let’s get used to it.