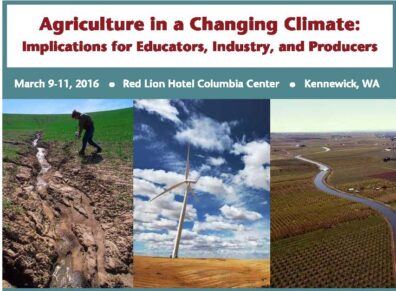 AgClimate.net has been discussing all aspects of climate change and agriculture for years, as exemplified by a 2016 workshop AgClimate.net co-sponsored.

On AgClimate.net, we have been discussing impacts on agriculture resulting from a changing climate for years now. We also discuss practices or approaches that show promise for helping producers adapt to the changes to come. And we discuss the ways that the agricultural sector can reduce its greenhouse gas emissions or, conversely, capture carbon, mainly in soils. Recently, however, it appears that these kinds of issues are front and center for a much broader swath of the agricultural sector. What might be driving this shift? Could it be another example of the pandemic highlighting other vulnerabilities? Or is interest shifting because of scientists’ ability to better tease out the contribution that climate change is making to recent extreme events that are impacting our region? I’ll get into that. But first, some examples of what I’ve been seeing in the media: 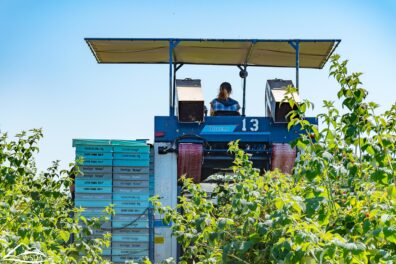 The 2021 raspberry harvest is one of the agricultural topics in the news recently, due to losses caused by the heat wave this summer. Photo: WSDA under CC BY-NC 2.0.

I do not think AgClimate.net can take credit for the greater media attention on our central tenet of discussing topics related to climate change and agriculture (though I do hope that our readership numbers reflect some contribution to this!). I expect that all efforts to communicate climate science information, to discuss impacts and possible adaptive solutions, and to identify and measure opportunities for capturing and storing carbon are contributing in some measure. The media’s recent focus on the United Nations’ COP26 conference in Glasgow has also likely made the topic newsworthy.

But the raised profile of this issue goes beyond communications and news. In the Pacific Northwest, we are also observing many of the impacts discussed in the popular press articles mentioned above: longer growing seasons, yield and fruit quality impacted by extreme heat, smoke-tainted grapes and wines from increased wildfire activity, greater impacts from fire blight during warmer springs. And, in some cases, we are experiencing extreme events outside the range of what we are used to, such as the 2015 “snow drought” or this year’s “heat dome.” Interestingly, these experiences are converging with better methods to quantify attribution, or the extent to which climate change is contributing to these extreme events. One example of both these points—an event outside the range of what we expect and where the climate change contribution is quantified—is the heat wave we experienced this past June.

As my colleague Nicole Bell described in her recent article, we experienced multiple days of record-breaking heat, with temperatures reaching well above 110°F over much of the region. This heat wave had significant impact on a range of crops, from significant losses in berries that were close to harvest, sunburn in apples, and possible impacts on shape and quality of potatoes. The scientists who formed the World Weather Attribution Initiative evaluated this heat wave, and came to the following conclusions (which I obtained from their associated online article): 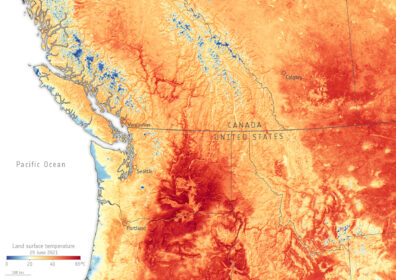 The heat wave in June 2021 is one example of an event that is both outside the range of what we expect and where scientists have quantified the extent to which climate change contributed to the event. Image: European Space Agency under CC BY-SA 2.0.

I am really interested in how this type of attribution can help inform the discussions around how different sectors of the agricultural industry can prepare for changes to come, and how we can contribute to reducing the emissions that result in the climate continuing to change. I hope you will continue to join us on AgClimate.net as we bring different aspects of this complex topic to the fore, and that you will take a minute to scroll down and comment on how useful it is to you to have information on the extent to which scientists can tease out the direct effect of climate change on extreme events like this heat wave.

This post is also available on the CSANR blog.