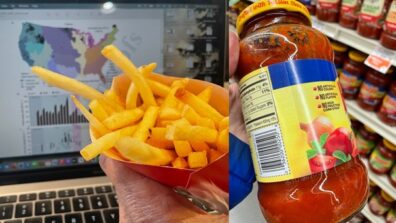 A new integrated approach makes it possible to explore options for enhancing the resilience of future supply chains for popular U.S. foods, such as French fries and pasta sauce.
Photo: David I Gustafson.

It’s been a long, hot, dry, fiery, smoky summer in much of the American West. That’s where the U.S. gets most of its fruits and vegetables, including two widely-consumed processed products that some might not immediately associate with this category: French fries and pasta sauce. Most of those fries start as potatoes grown in the arid inland parts of the Columbia River Basin, and nearly all of that red sauce starts as tomatoes grown in the currently parched Central Valley of California. Given how hot and dry it has been this year, you might wonder how supplies of popular foods such as these are going to fare in the future, as climate change continues to increase the odds of even hotter growing conditions and impacts availability of water for irrigation.

In previous articles we reported on the remarkable resilience we found in these supply chains, a surprising opportunity for certain food preparation methods to significantly reduce carbon footprints, and the massive role that consumer waste plays in their overall environmental impact. Now our research team has published a new study in Nature Food where we examined the supply chains for French fries and pasta sauce in great detail, using a unique, integrated approach that we developed for exploring climate adaptation and mitigation opportunities in fruit and vegetable supply chains.

This new methodology involves integrating a suite of models that quantify what will happen with crop yields, production areas, and grower profitability under future climates, as well as assessing the environmental impacts across the entire supply chain of foods like fries and pasta sauce. Integrating all these aspects helps us tackle a broad range of fundamental questions about future food supply chains. How will climate change impact future crop yields and prices? Will crop production be forced to move to different regions? How will grower profitability be impacted? How will environmental footprints change and what are the biggest opportunities to reduce future environmental impacts?

When we started the project we were quite concerned that future growers might run out of sufficient irrigation water to grow such crops by the year 2050 (the time horizon for our project). However, we have been pleasantly surprised to learn that the water footprints of these crops will actually decrease in the future, due to a combination of increased irrigation efficiency (less water is lost on its way to the plants), the predicted effect of higher carbon dioxide levels on crops’ use of water (if there is more carbon dioxide in the air, cool-season plants can capture it more efficiently to produce yield while not transpiring more water), and the shortened growing seasons (in warmer temperatures, crops grow and develop more quickly, so can be harvested earlier).

And of course, there are other ways that climate change can impact potato and tomato production. We examined an adaptation strategy in which farmers plant earlier to avoid heat stress. We found that this will work well, at least through 2050, even in those areas of the country (like California’s San Joaquin Valley, a major source of processing tomatoes today) where future ground water management restrictions are likely to force certain less profitable crops elsewhere. Because fruits and vegetables are generally more profitable to the grower, they will continue to be produced so long as irrigation water is physically available and growers continue to be able to avoid heat stress by planting earlier. If (and when!) the water finally does run out in California or heat stress becomes unavoidable, we show that growing processing tomatoes in the Pacific Northwest would be profitable, which would confer continued resilience to the overall supply chain.

This paper is just the latest of a series from our five-year study (launched in 2017) to explore these supply chains. Our integrated methodology has already been applied to six other crops: carrots, green beans, oranges, spinach, strawberries, and sweet corn (stay tuned for more details on those in the coming months). It can be applied to other crops, different consumer scenarios (fresh vs. processed foods, for example) and even applied in other countries, thereby informing decision-making throughout supply chains around the world. Employing such methods will be essential as food systems are forced to adapt and transform to become carbon neutral due to the imperatives of climate change. 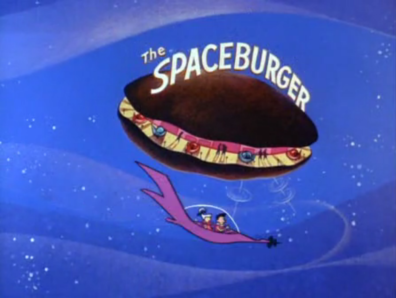 This new study confirms that fries and other popular foods will continue to be available far into the future, no matter how and where we go to buy them! Screen capture of the Spaceburger Drive-In from “A Date with Jet Screamer,” obtained from https://thejetsons.fandom.com/ under CC-BY-SA.

As with all science, our conclusions are predicated upon a suite of assumptions, biases, caveats, disclaimers, etc., and space does not permit us to address these (or the rest of the alphabetical list). Suffice it to say that we do attempt to characterize uncertainties wherever possible, but that some important questions about extreme events, like how frequently we might see other ‘PNW Heat Domes’ like the one in June 2021, are simply impossible to answer with today’s climate models. But for anyone out there worried about a futuristic encounter with a “robotic-fly-through,” don’t worry: you’ll still be able to get “air fries” with your burger. Maybe even with some ketchup made from tomatoes grown in the Pacific Northwest.

This post is also available on the CSANR blog.