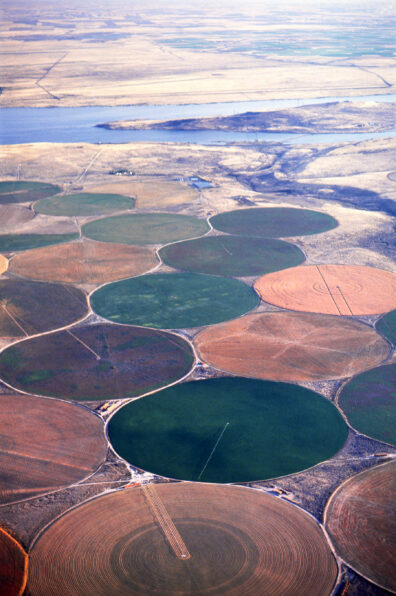 In this era with record-setting temperatures multiple years in a row, scientists are looking for methods to sequester carbon to slow the process of climate change. Agriculture plays a key role in not just the global economy, but also the global carbon cycle: cropland soils have the potential to be either sinks or sources of greenhouse gases, notably carbon dioxide. The conversion of native ecosystems to cropland agriculture has resulted in enormous carbon losses, estimated to be between 20-70% of the original carbon stored in native soils in the US. The Pacific Northwest is an agricultural powerhouse: in 2017, Washington, Idaho, and Oregon produced $22 billion in agricultural production on over 42 million acres. That’s a lot of soil. I recently read a white paper by Georgine Yorgey and colleagues at Washington State University titled “Carbon sequestration potential in cropland soils in the inland Pacific Northwest: Knowledge and gaps,” that summarizes research on carbon sequestration in the inland Northwest. It turns out that it is not a one-size-fits-all answer: the potential of certain croplands to either release or sequester carbon depends on climate, the cropping system, the soil type, and other factors. Fortunately, though, some soils do have great carbon sequestration potential.

While there is excitement over the potential to store carbon in agricultural soils, estimating the amount of additional carbon that can be stored in soils is difficult. We know that soil carbon is often lost when native vegetation is converted to cropland due to increased mineralization and decomposition, carbon exported at harvest, lower inputs of organic matter compared to native land, and sometimes erosion losses. However, even this is not always true; in some semi-arid systems that are converted to irrigated cropland (including certain irrigated regions of the Columbia River Basin), cultivation may actually increase soil carbon over time compared to the native system.

To effectively sequester carbon, the addition of carbon to the soil must be greater than the losses (Figure 1). If the loss of carbon is greater than the addition of carbon, the soil is a carbon source. Carbon sequestration in soils can be managed by either focusing on increasing carbon inputs, or by focusing on reducing carbon losses from the soil. What strategies work best may differ between dryland and irrigated systems, or even from crop to crop: this is partly why identifying one strategy that will work for all systems is not necessarily possible or even necessary. 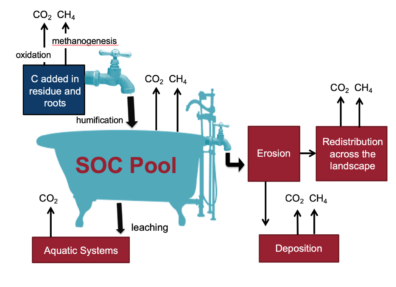 Figure 1. A bathtub analogy is used to describe how carbon can flux in and out of soil systems. Figure by Elizabeth Allen and Georgine Yorgey, adapted from Lal (2001).

Reducing or eliminating tillage is one highly effective method for reducing carbon losses, as the carbon in the soil is not regularly exposed to oxygen and microbes that accelerate its decomposition. But not all growers can transition to no-till systems, as tillage is required for some crops, like potatoes. Other farmers may find it difficult to transition to no-till due to special equipment costs or an increased risk of some diseases.

Meanwhile, strategies that increase carbon inputs include adding manure amendments, growing cover crops, or increasing the crop residues left in the field. Each of these strategies adds carbon from biomass and can increase nutrient cycling; those that leave plant material on the surface also protect the soil surface from erosion. It is important to note that there are tradeoffs and costs to each of these strategies, including the cost of purchasing and transporting seeds or amendments. For amendments in particular, cost depends a lot on how close a producer is to available sources. 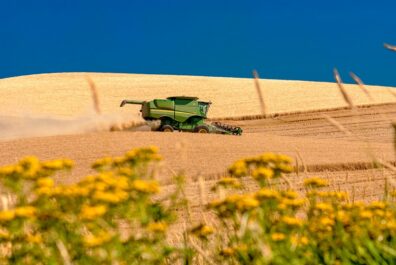 In dryland systems, such as these wheat fields, sequestering carbon in soils is more challenging than in irrigated systems. Photo: Charles Knowles under CC BY 2.0.

Practices to either increase carbon inputs or reduce carbon losses will generate benefits beyond our climate. Research indicates that when farmers use practices to build soil carbon, soil health improves and resilience increases. Specifically, farmers could see reduced erosion, improved soil water retention, improved microbial activity, and enhanced crop productivity. That is important, because without carbon markets in place to pay farmers for sequestering carbon, “private” co-benefits could provide the economic means for farmers to invest in carbon sequestration strategies. Meanwhile, there is still opportunity for mechanisms to support farmers in the provision of “public” co-benefits, including climate benefits and improved water and air quality, such as through incentives that lower the costs borne by farmers to implement carbon-building practices.

Existing research suggests that implementing methods to store greater amounts of carbon in our Pacific Northwest agricultural soils can result in real, though modest, gains in soil carbon. Further research is needed to allow for more specificity in estimating carbon sequestration potential across different agricultural regions and soil types. Though there are gaps in the existing knowledge, research in this area will likely continue to evolve, providing a clearer picture of to what extent cropland agriculture can contribute to mitigating climate change. Ongoing research can also suggest approaches that ensure farmers receive direct benefits, in addition to the public benefits that we all want. One thing is certain: a region that serves as a great agricultural powerhouse for the U.S. and beyond has the potential to lead the way in the implementation of effective carbon sequestration in soil.