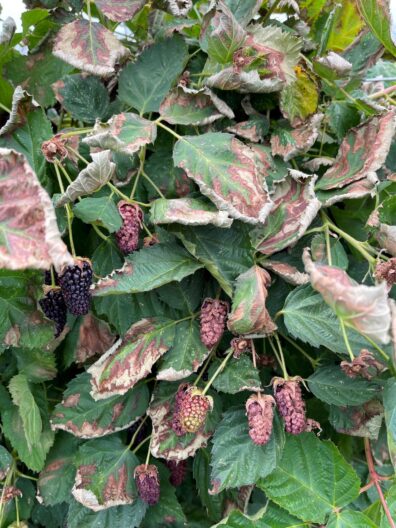 It wasn’t just hot in the Pacific Northwest (PNW) during the last week of June. It was extraordinarily hot. Temperatures at Oregon State University’s North Willamette Research and Extension Center (NWREC) in Aurora, Oregon, reached a high of 113°F on June 28, with a nighttime low of 85°F. It wasn’t just one day of scorching temperatures, though—much of the PNW experienced more than three consecutive days of highs in the triple digits, with lows staying above 65°F. With temperatures peaking in Lytton, British Columbia, Canada, at 121°F, some outlets are calling this multi-day event a heat dome. Growers are feeling the impact of June’s high temperatures. How does this type of heat affect staple and specialty crops, and how can the agricultural industry in the Pacific Northwest best prepare for events like this to come? Read on for some insights from the June heat dome.

A wide variety of crops were impacted by the record-setting heat, notably berries, cherries, and even some vegetables across the region. The PNW is the largest producer of tree fruit and berries in the U.S. For instance, over 95% of processed blackberries and raspberries are produced in western Oregon and Washington, which normally experience consistently mild summer temperatures. While these crops typically thrive in the temperate climate this region is known for, extreme heat can lead to devastating crop losses. Even in parts of Washington that are well-adapted to heat, sunburn can cause up to 50% crop losses if unaddressed. It’s not just high temperatures that cause damage to the food we grow, though: notably low humidity (ranging from 13 to 16% depending on the time of day; recorded in Aurora, Oregon) causes a biological response in plants.

Plants transpire water through pores in their leaves called stomates. It is this transpiration that allows plants to regulate leaf temperature, and when relative humidity is low, the level at which plants transpire increases. When temperatures are as high as they were during the heat wave, leaf stomates close to preserve water, regardless of how much water is available in the soil (thus, making relatively little difference if growers irrigate continuously throughout the heat). For example, this biological response occurred in raspberries and blackberries due to the heat wave: not only do the stomates close, but the plant may begin to pull water from the fruit itself, causing it to soften or dry, which ruins fruit quality. Not only does this biological response to high heat and low humidity negatively impact plants, but leaves can be directly scorched from the sun as well, further reducing plant growth and potentially quality of later-ripening fruit. Estimated crop loss for red raspberries, black raspberries, and trailing blackberries in the Willamette Valley due to June’s high temperatures is 60-70%, 70-80%, and 50-100%, respectively. Blueberry damage ranges from none to nearly 100%: the damage varies by what mitigation factors (i.e. shade net, evaporative cooling, overhead irrigation) the grower used, as well as by the cultivar planted.

Even some crops grown in regions more adapted and equipped to handle scorching temperatures felt the heat from the final week of June. Tim Waters, the Regional Vegetable Specialist at Washington State University, described how potato plants responded to the extreme heat: scorched and curling leaves and leaves that formed during the excessive heat being smaller than normal. “We are also concerned that since we cannot keep moisture consistent in potato fields that we could have many tubers that become misshapen and that other tuber quality attributes such as soluble solids could be impacted resulting in economic losses to producers.”

Potential damage to crops isn’t the only thing that must be considered when temperatures soar: the health and safety of agricultural workers cannot be overlooked. California’s Division of Occupational Safety requires the following: a written plan for heat illness prevention, training for employees and supervisors on illness prevention, fresh and free drinking water, and shade provided at request. Other states have instated similar heat illness prevention requirements. Doug Krahmer, an Oregon blueberry grower, said that 92°F is when they pull crews out of the field: “We keep our employees safe first, and do the best for our crop after,” he stated.

If we know that extreme heat events like this are difficult to model and predict, how can growers best prepare for the future? Growers and researchers alike are working on new mitigation methods, as well as relying on trusted methods to reduce the impact of heat on crop yield. Researchers at Washington State University are testing a high-tech approach to prevent sunburn in apples while also conserving water: irrigating the canopy of crops is a common mitigation method to reduce fruit and plant surface temperature, but this method has some downfalls. It leads to more vegetative growth, thus reducing fruit quality, and uses water during times of year where farmers try to conserve as much as possible. This research created a sensor-based cooling system that detects the surface temperature of fruit and sprays water with more precision, conserving water and money.

More tried-and-true heat mitigation methods include evaporative cooling (overhead micro-sprinklers), drip irrigation, and regular overhead irrigation. While only approximately 25% of Oregon blueberry growers have invested in evaporative cooling thus far, almost all growers in Eastern Washington use this method, along with overhead shade netting to decrease field temperature and increase humidity. Additionally, new blueberry growers have the advantage of being able to plant varieties that have been bred to better suit high temperatures with low humidity. Unfortunately, red raspberries and blackberries are very vulnerable crops. While growers can theoretically use micro-sprinklers to reduce damage, this is not economical for crops grown for processing. OSU Professor and Extension Specialist Dr. Bernadine Strik asserted, “Varietal adaptation is really the only thing that will save the caneberry industry.”

Part of what made the effects of June’s extreme temperatures on soft fruits so devastating was the timing of the heat event itself: fruit that was ripe or close to harvest was hit hard, while later season fruit seemed to fare better. Events such as the PNW heat dome point to the need for growers to adapt to a future that is warmer. This experience could provide a useful opportunity to think about climate resiliency in new ways and may help prevent damage from future heat events.

The author would like to acknowledge Tim Waters, Chris Benedict, and Carrie Wohleb from WSU Extension and Bernadine Strik from OSU Extension for their contributions to this article.

This article was written as part of Fruit & Vegetable Supply Chains: Climate Adaptation & Mitigation Opportunities (F&V CAMO), a project that seeks to identify and test climate adaptation and mitigation strategies in fruit and vegetable supply chains. This work was supported by USDA-NIFA Award No. 2017-68002-26789.