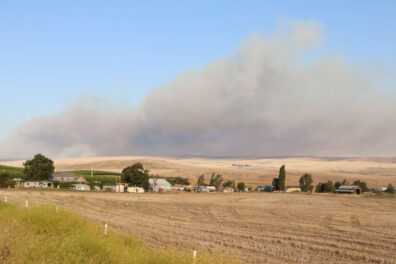 Wildfires directly impact agricultural production and the lives of those who live and work in agricultural areas. Photo: Jacob Powell.

The primary focus of wildfire preparedness and prevention in the past has been in forests and the wildland urban interface. However, 75% of the area consumed by wildfires across the U.S. is in non-forested ecosystems, much of it covering rangelands and crops. Wildfires directly impact agricultural production and the lives of those who live and work in agricultural areas. Farmers and their employees are also heavily involved in efforts to control wildfires, even with potentially direct risks to their health and safety. I discuss these impacts, as well as options that are available to improve preparedness.

Over the last several years wildfires on agricultural lands have increased, causing damage to orchards, crops, livestock, and farm infrastructure. Outside of the direct flames, smoke also damages crop quality, such as grapes used in wine production. Agricultural areas with irrigated crops are often viewed as being safety buffers during wildfires. However, in the last decade wind-driven heat from surrounding wildfires have burned into some surprisingly well irrigated crops, such as fruit orchards and vineyards. The heat from these wind-driven fires can burn several rows into an orchard and often kills the outer 2-3 rows, along with delaying fruit set for another year in rows further in. The direct flames and radiant heat also damages fences, sprinklers, and other surrounding farm infrastructure. Dryland crops, such as wheat, are particularly susceptible to fires when they are mature and being harvested at 18-24% moisture content. In addition, annual grasses, such as cheatgrass, create flashy fuel loads across rangelands.

Critical fire weather is occurring more frequently and at the same time across large areas in the west, meaning that firefighting crews will continue to be short staffed when multiple large fires are burning simultaneously. The number of days with high fire danger occurring at the same time across large areas in the western U.S. has increased by 25 days since 1979. In addition, the average length of the wildfire season across the U.S. is 105 days longer with three times as many large fires (greater than 1,000 acres) as in the 1970s. Rural areas will need to invest more in preparedness and suppression efforts going forward. 2021 is setting up to be an exceptional fire season with spring precipitation ranking as the 2nd driest for Oregon and 4th driest for Washington since 1895. Since 1990, this is the second earliest that the National Preparedness Level for wildfires has been at Preparedness Level 4 (out of a maximum of 5). Climate projections estimate that Oregon will have 17 more days per year with high wildfire potential by 2050 compared to 2000.

Farmers are resilient and determined people, however, many being multiple generation farmers. They often live in areas that lack rural or state fire districts. Many are also volunteer firefighters in their communities. Others have learned how to suppress wildfires on crops and rangelands from previous farming generations. During the fire season, water tanks and pumps take up the back of most farm trucks. Many farmers are connected with 911 dispatch and notified via text when there is a fire in their area. Climate change will continue to make rural firefighters a valuable resource. 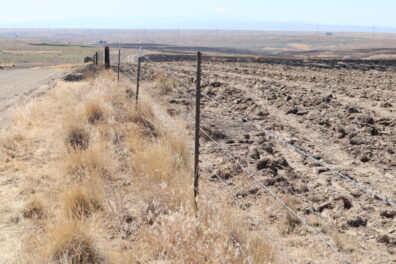 Burn scar on farm ground from recent wildfire activity. Farmers and ranchers are well experienced in preventing wildfires on their property. Photo: Wrentham Market Rd Fire near Boyd, OR in July 2021; Jacob Powell.

Farmers and ranchers are well experienced in preventing wildfires on their property, but those travelling through may be less careful. As the number of people living and recreating in the Pacific Northwest increases so does the probability of a fire happening. In 2018, 89% of wildfires in the U.S. were started by humans. Crop fields and rangelands along transportation corridors are increasingly burning from potential arsonists or accidental sparks, such as from trailer chains. Existing and new energy infrastructure on agricultural lands, such as powerlines and wind towers, also have the potential to start fires. Powerline ignited wildfires in California have increased in size 5-fold over the last two decades compared to 1981-1999. In July 2018 a 2,000 acre fire was sparked by a faulty wind turbine near Arlington, OR that burned across fields of wheat and rangeland.

July 2018 was an unprecedented wildfire season for wheat producers and cattle ranchers in Wasco and Sherman Counties in North Central Oregon, burning nearly 120,000 acres and tragically resulting in a fatality. In response, Oregon OSHA created new requirements in 2019 for producers with employees who engage in suppressing wildfires in crops and rangeland. Employees must receive some form of basic wildland firefighting training and an annual refresher. Producers must have an emergency action plan and fire prevention plan. OSU Extension Service is providing preparedness training for wildfires in agricultural areas, detailed information on the OSHA requirements, templates for required plans, and links to two online classes, as well as several freely available webinars. These trainings are intented to help producers respond efficiently these additional regulations, in ways that will reduce the risk of wildfires to agricultural producers physical and mental health, along with their crops and farm infrastructure.

One thought on “Agriculture is Feeling the Flames and the Smoke”