Did you know that the Northwest is the most glacier-rich region in the lower 48? Glaciers throughout the region provide essential cool, late-summer water for irrigation, fish, and for our taps. Their fate under warming climate conditions, however, is shaky. Even though glacial melt water is crucial to ecosystems and economies alike, we know shockingly little about how much water glaciers provide or where it flows. 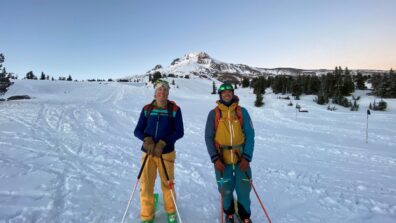 Aaron Hartz and Anders Carlson, founders of the new Oregon Glaciers Institute, are friends, scientists, and potentially part mountain goat. Their mission is to document and study the causes of change for Oregon’s poorly understood and undervalued glaciers, by foot and by photo, and to provide projections of each glacier’s future. Both Oregon State University alumni, collectively they bring decades of full-spectrum knowledge and experience that spans professorial expertise, and the hard-won nitty-gritty knowhow that comes from avid exploration of high alpine terrain. I talked to these intrepid scientists and adventurers about what inspired their work and what they are discovering about the current and future health of one of the region’s essential water resources.

PE: What does the Oregon Glaciers Institute do and what inspired you to create it?

AC: A couple of years ago, we started talking about Oregon glacier disappearance and how we can maybe do something to study the glacier change occurring in Oregon. During the pandemic lockdown, we decided that we should start monitoring this change and look at glaciers remaining in Oregon ourselves. Last summer, we conducted the first census of glaciers in Oregon since the 1950s. [We did a] kind of binary census asking, is this still a glacier or not? The goal of all this work is to set up a glacier monitoring network. We will actually go out and measure a couple of “benchmark” glaciers and also go back to every glacier in Oregon every year or every other year to measure changes. [In combination with historical photos], we can put together a long-term record of glacier change, both from the past and the present in perpetuity to look at how this water resource is changing.

PE: Are there some specific water resource or economic impacts motivating your work?

AC: You can’t pull out water for irrigation if you’re hurting the fisheries, and there is definitely competition. Glaciers are also a freezing-temperature water source, and by the end of the summer, they are the only source to [some] streams. Right now, we don’t know what the glacier component is for these streams, and we have to change that.

PE: How do you think the work that you’re doing will get us closer to understanding those localized impacts of glacier inputs into streams?

AH: [By improving our] understanding of how much water is coming out of the glaciers and the timing of when most of the water is coming out. But also just trying to figure out how long these glaciers are going to keep supplying water is important. As glaciers change, the amount of water coming out can also change. I think that’s going to be very important in the future decades, but that’s something that we still don’t know a lot about right now.

AC: It’s also about building small-scale linkages and letting ranchers and farmers know that their irrigation water is being sourced by glacial melt [generally] in the late summer. At the local scale here in Oregon, we have treated glaciers as a far distant phenomenon, but in Washington and Oregon, we have a fair number of glaciers left, and we have large population centers near them. There should be a connection where we see [glaciers] as not only some natural, beautiful phenomenon, but also as an intimate part of our socioeconomic and environmental system.

PE: When we talk about glacier and water loss, we’re not talking about something equivalent to the seasonal drought we’ve seen so far, but an extra layer, would you agree or disagree?

AC: I agree. I mean, this is not like seasonal drought. This is a threshold or a tipping point. In any drainage basin, if you lose the glacier it’s going to be a fundamentally different system and yeah, [the glacier water] is gone.

PE: How can everyday people help your effort to measure and track glaciers and Oregon?

AH: We’re asking people who have photos from Oregon glaciers, especially pre 2000 or 2010 to email those to us. We’re also working on a way to collect current photos. We’ve got people hiking all over these mountains and they can be our time-lapse camera.

What have I learned? Once glaciers are gone, so is their seasonal water input. This has major potential implications for balancing water demands for fish, agricultural irrigation, and communities. The late-summer timing of ice melt can help ease competing water needs during the driest time of year, but we know surprisingly little about when and where Oregon’s glaciers contribute. Without this knowledge, we are essentially blind when it comes to understanding where and when change will occur, and thus ill prepared to make adaptations within the agricultural sector specifically, and the region’s economic, social, and environmental systems broadly.

Luckily, two passionate leaders, clad in bright Gore-tex, have seized the mantle and linked efforts with agencies and experts to make new strides. History has already been made! Their “boots on the ground” glacier tracking efforts just led to a new discovery of a large glacier outside of Bend, Oregon. To learn more about the Oregon Glaciers Institute, their partnerships, and what you can do to contribute to glacier tracking efforts, explore their website here.