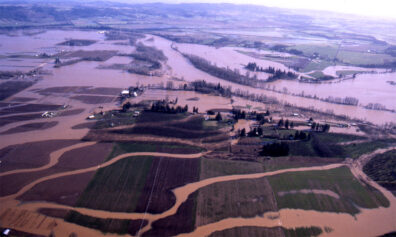 Figure 1. The Pacific Northwest was hit by an historic flood in February 1996. Corps dams were put to the test and held back as much of the flood waters as possible, but too much rain fell in the valley below the dam. As a result, many communities in western Oregon felt the impacts of the flood waters. Photo: Portland Corps under CC BY 2.0.

Previous posts on AgClimate.net have focused on research related to anticipated climate change impacts on water availability and timing of available irrigation water in the Columbia River Basin, given the concern with having sufficient water to support the range of uses in the region. But is too little water the only concern? Laura Queen of the Oregon State University Climate Change Research Institute is the author of a recently published paper titled “Ubiquitous increases in flood magnitude in the Columbia River Basin under climate change.” Queen and her colleagues explain how in systems dominated by snowmelt, as is common in the Pacific Northwest, observational studies have shown consistent changes toward earlier spring streamflow and lower summer streamflow. This change has important implications for water users in the region. Less frequently discussed are the anticipated impacts on flooding (Figure 1), which is second only to fire in federal disaster declarations brought about by natural disasters in the Pacific Northwest.

Queen and her co-authors built upon previous modeling work by using an existing large ensemble of climate–hydrology scenarios of streamflow at almost 400 sites across the Columbia River Basin. They paid particular attention to high flow extremes that can lead to flooding, with a focus on three major rivers within the Columbia River Basin: the Willamette, Snake, and Columbia Rivers. They compared flood statistics calculated for the second half of the 20th century to values calculated from projections under future climates in the second half of the 21st century. They found that the vast majority of locations across the Columbia River Basin are expected to experience increases in maximum streamflow magnitudes in the future. Many locations could see increases of 100% or more in the 50-year and 100-year flood magnitude, with some smaller tributaries potentially seeing increases of as much as 175%. 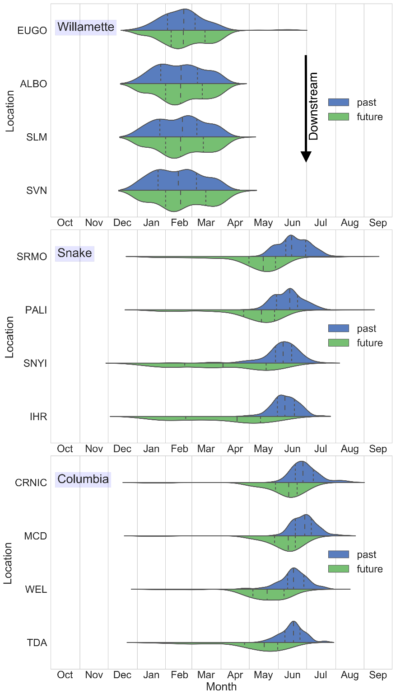 Figure 2. Distribution of the timing of flood events, based on simulations for each river. For each of the 40 simulations, the dates of the five highest streamflows in the 50-year past (blue) and future (green) windows were tallied, and the resulting distributions smoothed. Comparing the shape of the past and future flood windows provides insight into the shift in the timing of flood events on the Willamette, Snake and Columbia Rivers in the future. Reproduction of Figure 11 in Queen et al. 2021, under CC 4.0.

Queen and her colleagues also discuss interesting findings related to the expected change in the timing of seasonal flooding, particularly since many water management policies are strongly linked to the calendar year. They computed the probability of flooding for 50 years in the past (blue) and 50 years in the future (green) at all the points on the three rivers of interest (Figure 2). “The seasonal timing of flooding shifts dramatically on some rivers (e.g., on the Snake, 20th-century floods occur exclusively in late spring, but by the end of the 21st century some floods occur as early as December) and not at all on others (e.g., the Willamette River).”

This study examined the effects of climate change on the natural system, and did not take into account existing water management infrastructure such as reservoirs. While impacts of these changes on specific areas are dependent on a number of factors including landscape and flood control infrastructure, the study’s results certainly warrant a closer look by water managers and water users in the region and point to the importance of updating flood preparation in the region.

For more details, see the recorded webinar or Laura Queen’s article in the Climate CIRCulator.