This is an opinion piece published in the Walla Walla Union-Bulletin on December 13, 2020. We will be sharing further details on the results of this project through blog articles in 2021. Stay tuned! 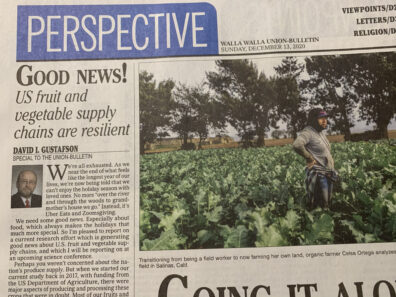 Celebrating some good news for fruit and vegetable supply chains across the United States.

We’re all exhausted. As we near the end of what feels like the longest year of our lives, we’re now being told that we can’t enjoy the holiday season with loved ones. No more “over the river and through the woods to grandmother’s house we go.” Instead, it’s Uber Eats and Zoomsgiving.

We need some good news. Especially about food, which always makes the holidays that much more special. So I’m pleased to report on a current research effort which is generating good news about US fruit and vegetable supply chains, and which I reported on at a recent science conference.

Perhaps you weren’t concerned about the nation’s produce supply. But when we started our current study back in 2017, with funding from the US Department of Agriculture, there were major aspects of producing and processing these crops that were in doubt. Most of our fruits and vegetables come from California, where farm labor is in short supply, as well as irrigation water. And you may have noticed that much of the state now seems to be on fire each year. Some of those crops may soon be following wine grapes up here to Walla Walla.

It was against this backdrop that we launched our four-year study to explore climate adaptation and mitigation options (CAMO) in US fruit and vegetable supply chains. “Adaptation” and “Mitigation” are words of jargon from the climate science community. Adaptation simply means what we do to adjust the way we grow crops in the face of climate change, and mitigation is what we do to reduce the amount of greenhouse gases generated by growing, processing, transporting, and preparing food items from these crops.

When we started the project we were quite concerned that we might run out of sufficient irrigation water to grow them or that expected increasing levels of heat stress would kill them off by the year 2050 (the time horizon for our project). However, we’ve been pleasantly surprised to learn that the water use efficiency of these crops will actually increase over time, due in part to the predicted effect of higher carbon dioxide concentrations on crop biochemistry.

As I’m sure most folks know, carbon dioxide (CO2) is the most important of the greenhouse gases that are generated by humanity’s continued use of fossil fuels. But CO2 is also an essential requirement for plant growth, meaning that fruit and vegetable crops all respond favorably to the higher concentrations that our future holds. These higher CO2 levels also cause plants to generate higher harvestable yields per unit of water absorbed through the roots.

This is not just good news – it’s great news! Especially in California and other areas of the western US where water is scarce and many important fruits and vegetables are grown. 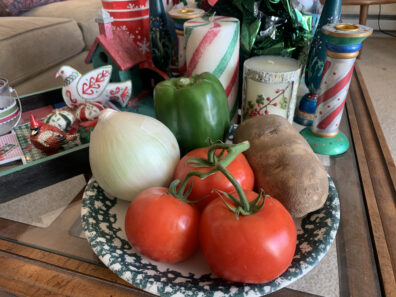 A four-year study to explore climate adaptation and mitigation options in US fruit and vegetable supply chains suggest they are resilient to a changing climate.

The other really good news is that it seems likely farmers will be able to largely avoid the predicted higher levels of heat stress caused by climate change. They can do this by simply continuing to plant their crops a bit earlier in the season each year, as they already have been. Production regions can also shift northward, as the growing season lengthens in the northern tier of US. These are simple adaptation measures that our research demonstrates will continue to be effective.

Mitigation options are a little trickier, but even here our team has identified several simple changes to supply chains that can reduce greenhouse gas emissions, such as using trains instead of trucks for transport, modifying certain food processing steps, and reducing food waste.

Now none of this is a 100% “slam-dunk.” Niels Bohr, the Nobel laureate in Physics and father of the atomic model, is quoted as saying, “Prediction is very difficult, especially if it’s about the future!” And that is especially true for biological systems.

As we’ve all learned this year, life is fragile and always susceptible to a novel disease or virus. This includes our crops. And there’s good reason to believe that climate change, especially warmer and wetter conditions, could be conducive to greater frequencies of disease outbreaks, by both known and novel pests. We can’t accurately model such outbreaks, and have been forced to assume that current and future pest-control strategies will be sufficient to control them. We’ll see.

But let’s not dwell on those uncertainties! It’s been a rough year, and it’s time to celebrate whatever good news we have. Pass the mashed potatoes!