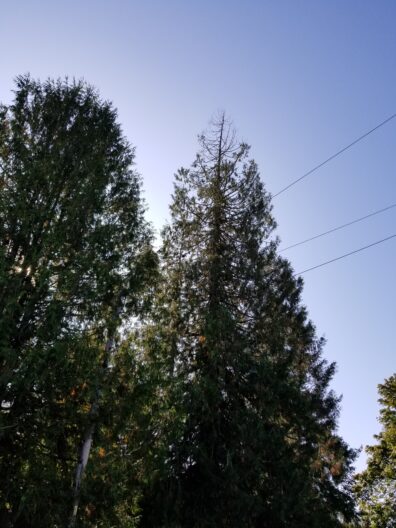 Trees in this area have evolved to handle an annual dry season and, generally, mild temperatures during that time ensure they don’t suffer too much stress.  However, in the last decade the coastal Pacific Northwest has experienced unusually stressful conditions.  The summers of 2015, 2017, and 2018, for instance, were very dry and also particularly hot, which worsens moisture stress in trees.  While it is difficult to attribute any given year to climate change, climate modeling suggests hotter summers like these may be a new normal, and a drive down I-5 in western Washington will show many trees have already paid a price.

Perhaps the most visible result of these stressors is the decline of western redcedar, particularly in the lowlands of southwest Washington.  Soils with high water tables and restrictive layers, often with a significant clay component, are saturated through much of the year and typically don’t dry out until the late summer.  However, in the case of an unusually hot and dry summer, these soils dry much earlier and more intensely, causing significant stress.  These soil types seem to correlate with much of the cedar drought damage seen in the region but it can be found in many scenarios.  I’m sure many of you have seen this damage: tall trees with relatively healthy foliage on bottom but becoming sparser as they lead to a dead top.  It’s very possible for these trees to bounce back if they catch a break the next year, but successive hot summers will compound the damage.  Stressful summers also leave them highly susceptible to native pests, such as the cedar bark beetle.  So, either as a result of pure moisture stress or a combination of stress and pests, we are seeing many cedars die.

Bigleaf maples are experiencing a similar decline in the region.  If you’ve been in the area you’ve probably seen this damage as well.  Instead of the typical wide-spreading, dark-green crown you see dead branches, small leaves, and early browning.  While significant research has gone into determining a specific pest behind this damage and mortality there is still no clear answer, leading experts to believe it is a similar situation to the western redcedar.  Many of the maples dying are found in yards, forest edges, and in urban settings, all of which are associated with greater moisture stress. 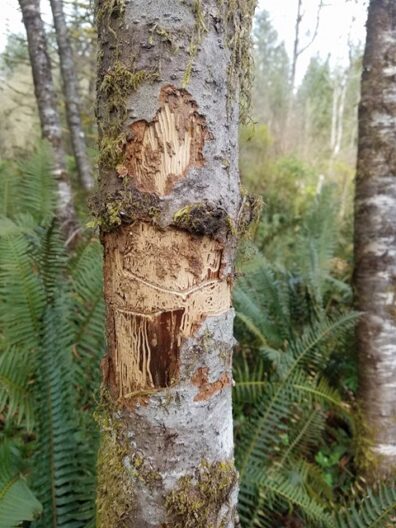 In western Washington and northwest Oregon, the fir engraver beetle typically acts as a secondary pest or opportunist, usually only killing trees that have been unable to compete successfully with others.  It feeds on true firs (Abies spp.) like grand fir and noble fir and in southwest Washington I have noticed a significant increase in fir engraver damage on these two species.  This is yet another result of successive hot, dry summers weakening trees and opening the door for a native pest.  With all this food available, beetle populations have been able to build to unusual levels. The damage has been particularly bad on noble fir in the lowlands, which typically grows at higher elevations and is likely under greater stress for that reason.

Although many trees have died in the last few years, these species are not necessarily in dire straits.  That said, active forest management will be critical to mitigating damage in the future.  Stand density management (i.e. thinning), proper species-to-site matching, seed zone matching, and actively monitoring forests for damage will both make forests healthier today, and give forests a better chance at weathering climate change.  Fortunately, multiple universities, federal and state agencies, and non-profits are all working to figure out the best path forward for forests in the Pacific Northwest.  Recently, a group of WSU researchers and Extension agents joined forces with partners throughout the region to examine the correlations between these forest health concerns and climate, soils, and other factors.  They will lean heavily on forest owners and citizen science to be eyes and boots on the ground. To learn more and get involved, go to foresthealth.org. We all benefit from the services forests provide, so it is our collective job to listen to the science and actively monitor and manage them through this global challenge.