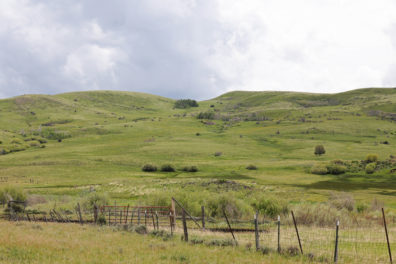 The amount of annual net primary production on rangelands forms the forage base upon which livelihoods and billions of dollars of commerce depend. Land managers and livestock producers in the Pacific Northwest deal with high year-to-year variations in net primary production, which often varies 40% between years due to changes in the amount of precipitation from one year to the next. And in the future, it is widely expected that climate change will lead to further increases in year-to-year variability, creating both challenges and opportunities for ranchers in the region. We therefore need to understand the longer-term changes in how net primary production and resulting forage production will vary, so we can explore new options that provide increased flexibility to ranchers and managers.

As part of the case study we recently shared, we took a preliminary look at the Reynolds Creek watershed, southwest of Boise, Idaho. In this watershed, the amount of forage has varied about 20% from year to year, on average (Figure 1A). However, as ranchers know, averages are rarely observed in rangeland environments. Annual production values varied from reductions of up to 60% for drought years, like 1992, 1999, and 2007, to around 40% increases in high productivity years, such as 2005 and 2011 (Figure 1A). This range represents a 1.5- to 2-fold difference between highs and lows. The magnitude of that range suggests how important it is to understand how variable forage production actually is when deciding on how to manage a livestock operation. This understanding can also help operators manage the risk this level of variability presupposes. Here’s one example of how this information could be used: the forage production highs and lows could be used to develop “what if” scenarios, and help ranchers focus in on what contingency plans are needed.

Figure 1. Annual net primary productivity (ANPP) in the Reynolds Creek watershed, Idaho. (A) Historical ANPP, which ranged from 642 to 1,413 lb/acre (720 to 1,584 kg/ha) between 1984 and 2018. Data source: Rangeland Production Monitoring Service (RPMS). (B) Projected ANPP under future climate change using five different Global Circulation Models (GCMs), which is modeled to range from 1,293 to 2,087 lb/acre (1,449 to 2,339 kg/ha) between 2064 and 2098. These data were obtained from an ensemble of five different Global Circulation Models (GCMs) run under a future scenario called Representative Concentration Pathway (RCP) 8.5. The gray symbols represent the average of the five GCMs, and the red and blue symbols represent the projections from the GCM with the lowest and highest ANPP, respectively. The peaks and valleys of each line represent the variability in ANPP that a particular GCM projects. The difference between the blue and red lines reflect uncertainty about which model will best represent the future.

As we mentioned earlier, climate change is expected to increase the variability in forage production. Evaluation of five different climate models reveals that year-to-year variability could double over the next 50 to 85 years, and differences between extreme droughts and bumper years could reach 2.5- to 3-fold (Figure 1B). In addition, future climates may also enhance shifts in vegetation that may not be beneficial to the forage base, such as increasing shrub density or exotic annual grasses or decreasing average forage production. Long-range planning that is informed by an understanding of the expected year-to-year variations in forage production can help ensure that current stocking rate decisions do not degrade the forage resource, decreasing the odds of speeding up such shifts in composition of the vegetation.

While precisely what the future will be like remains uncertain, highs and lows in the forage base will likely become more common and more extreme. Sustaining viable ranching operations may well require management that is characterized by increased flexibility and adaptability. The more we look for innovations that give ranchers that flexibility now, the more likely they are to have the tools they need in the future.

This article is adapted from a sidebar in an Extension publication describing the experience of Brenda and Tony Richards in the Soda Fire in 2015. The full publication is referenced below, and is available online, with its accompanying video, at http://csanr.wsu.edu/case-studies/.