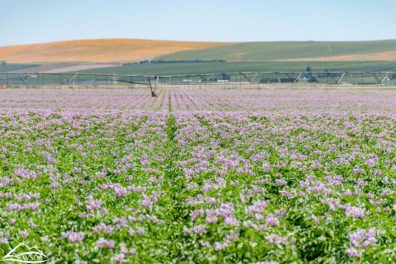 Potatoes. An important irrigated crop in Washington State, where planting slower growing varieties could be an adaptation to the impacts of climate change. Photo: Washington State Department of Agriculture under CC BY-NC 2.0.

Our colleague Keyvan Malek has written about his work on irrigation efficiency, exploring the complexities such as return flows, economics of different technologies, and how critical it is to understand the interplay of factors in each particular watershed or basin. Check out his most recent publication, a collaboration between Washington State University and Cornell University, with an eye on the two main aspects of this research study. First, Malek and his colleagues confirm the expected impacts of climate change on irrigated agriculture in the Yakima River Basin: “increasingly severe droughts and temperature driven reductions in growing season significantly reduces expected annual agricultural productivity.”

They then go on to explore how shifting to slower maturing crop varieties, an adaptation to the accelerated growth and maturity due to warmer temperatures, may play out. Their findings suggest that this shift would indeed increase yields – their goal – yet would also increase the year to year variations in yields, as these crops would be more vulnerable to the increasing drought and water shortages driven by climate change.

As with much of Malek’s work, this study highlights the importance of exploring the complexity of climate change impacts, the effectiveness of adaptation strategies, and the need to understand and consider the institutional context – in this case, the regulations and laws that determine how water is managed. And this is paper is just a first step; Malek and his WSU colleagues are excited about the conversations this work is fostering with water managers in the Yakima basin.