Cartoon adapted from https://pixabay.com (free for commercial use; no attribution required).

A few months ago I wrote an article that gave a preview of the work we were conducting, to explore whether Washington State could become the new California in vegetable production as the climate warms. Results from this work are now in, and the answer is… yes, the potential is definitely there. We used a crop simulation approach to determine whether vegetables predominantly produced in California—we focused on tomato, carrots, broccoli, spinach and lettuce—could be grown in four different counties in Central Washington that currently irrigate lower-value crops (winter wheat and alfalfa). We assessed whether the shift in use of such irrigated land to these vegetables would provide an economic advantage to farmers. We explored a variety of possibilities, including two scenarios where vegetable production in Central Washington would account for 5 or 15% of current U.S. vegetable production, and five scenarios where different proportions of the potential available irrigated land surface would be used to produce vegetables.

We focused on the period from 2020 to 2050 to model how land use would change under the different scenarios and under future climate conditions using a constrained optimization land-use model. The crops were simulated with the CropSyst model developed at Washington State University. We analyzed how the expected yield of crops, the prices received, and the cost of growing crops in central Washington compared to the values achieved with the current, lower-value crops, summarizing these results into three variables of importance:

According to our analysis, during the period of 2020-2034, yields of vegetables for processing could increase 22.5%, on average, over the simulated current yields in the region. The increased yield would extend past 2035 for some vegetables that do well with the higher temperatures projected for central Washington after that time. However, further increases in temperature from 2035-2050 would result in up to 4.1% reduction in yield of lettuce and spinach, which require mild temperatures for optimal growth. This downward turn in yields for this second period was primarily expected in Benton and Franklin counties, while the benefits of increased temperatures lasted longer in Grant and Adams counties (Figure 1). 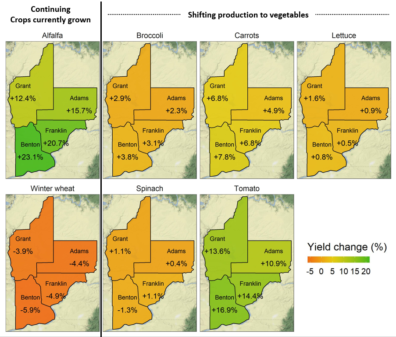 Figure 1. Expected changes in yield of crops, simulated using the CropSyst model, from the baseline 2005-2015 period to 2020-2050. Yields of some crops are expected to increase while others would decrease, and changes would vary from county to county in central Washington.

A change between 1.3% (~3,700 ac) and 9.1% (~11,600 ac) in the harvested surface from irrigated alfalfa and winter wheat to vegetable crops produced an economic benefit of $33 to $405 million by 2050 (Figure 2). The model suggests the largest changes in land use would be towards production of lettuce and tomato, with minor changes in the production of broccoli. The net return of production from carrots and spinach resulted in only slight economic benefits over winter wheat and alfalfa, so they did not contribute much to changes in land use. 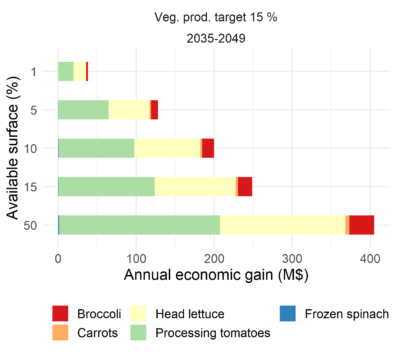 Overall, our findings indicated that climate change could actually provide an opportunity for new income for Washington with the introduction and expansion of vegetable production. In addition, changing the use of less than 11,600 acres from winter wheat and alfalfa to vegetables resulted in reduced water use with minimal increase in greenhouse gas emissions. However, these opportunities may disappear as the climate continues to change and the minor increase in greenhouse gas emissions may increase with larger scale production of vegetables. Yet, as Don Quixote advised “it is the part of a wise man to keep himself today for tomorrow, and not venture all his eggs in one basket”. Hence, the production of vegetables in Washington will diversify the risk of producing vegetables in one place, especially if adverse drought conditions continue in California in the future. Moving a small portion of the production of vegetables today from California to Washington can prevent future shortfalls in the domestic supply of food in the U.S.

4 thoughts on “Managing for Washington’s Future: A Bigger Player in Veggie Production”