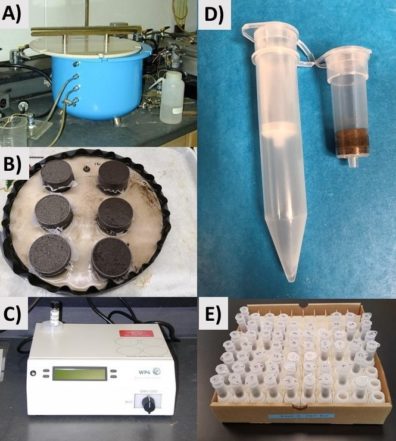 Biochar has potential to draw down atmospheric carbon when applied to agricultural soils (as discussed in my previous article on this topic). There is currently not a robust way for farmers to be directly compensated for the benefits to society such drawdown provides. However, researchers have been exploring other co-benefits of using biochar as a soil amendment. One such co-benefit is biochar’s ability to increase the water-holding capacity of agricultural soils, and thus increase plant productivity in situations where water is limiting. However, documenting this effect has been limited by how time consuming and expensive it is to measure plant-available water-holding capacity (PAWC) by standard methods (See Figure 1 A, B, C). In an effort to alleviate this barrier, Jim Amonette at the Pacific Northwest National Laboratory and Washington State University’s Center for Sustaining Agriculture and Natural Resources led the development of a new, inexpensive, rapid method for measuring PAWC of soil-biochar mixtures (See Figure 1 D, E), based on applying a specific level of water potential to a sample using a centrifuge. The sample is supported by a filter membrane fixed midway in a centrifuge tube, thus allowing drainage into the bottom of the tube to occur. 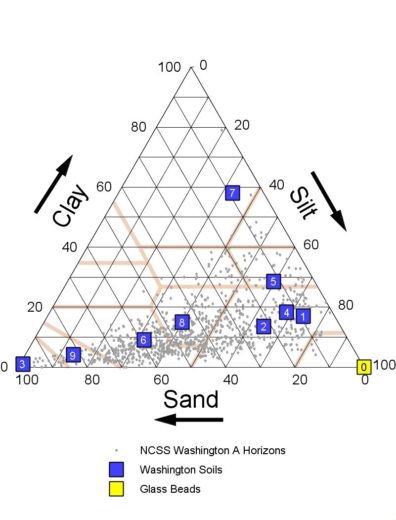 The new method was calibrated against standard methods and then applied to 72 combinations of soil and biochar: nine Washington soils of varying textures (Figure 2), each combined with four biochars, and at two different biochar application rates. Use of this new, rapid method for measuring PAWC allowed Amonette’s team to collect data in just five days, when use of standard methods would have taken several months. This new method therefore has great application potential as a screening tool in future research and in monitoring changes in PAWC over time.

The data collected from the 72 combinations of soil and biochar led to the following conclusions regarding the effects of biochar amendments on the PAWC of soils:

One important take home message is that biochar benefits do not necessarily increase proportionally with application rate. Figuring out the particular “sweet spot” to achieve the most economical application rate will be specific to a particular soil-biochar-crop combination. The dominance of the inter-particle effects in PAWC increases in this study was fascinating and begs for more research. This and future work will get us closer to what is considered the holy grail of biochar application: being able to target a particular biochar to a particular soil type to solve a particular issue – in this case, improving water-holding capacity.