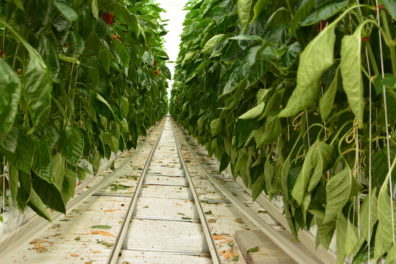 Greenhouses provide a tightly controlled environment, where computer systems allow strict management of ventilation, lighting, irrigation, humidity, temperature, and carbon dioxide concentration, with higher yields and resource use efficiency. These factors are all energy intensive, and therefore energy requirements can be large. Most of the technology is imported from the Netherlands, where it has been fine tuned in the last few decades to help achieve their national goal of “producing twice as much food with half the resources.” Adoption of this technology has helped the Netherlands become a global leader in the export of tomatoes, potatoes, onions and other vegetables, in spite of a lack of access to a massive land area, considered necessary for large-scale agriculture.

While greenhouse production of vegetables is not currently prevalent in the Pacific Northwest, given the national and global trend, and given the fact that it has been successfully incorporated just across the border in Canada (Figure 1) and in California (Figure 2), we plan to explore the impacts of this innovation on food production, energy production and the water system in Washington State. To get a better sense of the technology, production practices, and challenges, part of our team visited a bell pepper greenhouse production facility in British Columbia in 2018 (Figure 3). We also invited American Ag Energy—a company based on the U.S. East Coast, that is focused on integrating greenhouse production with power plants—to visit our team and discuss their operations. For example, we learned that the technologies prevalent in British Columbia were developed for milder summers and might not apply directly to hotter areas such as central Washington State.  Another factor that came up was the importance of having clean rainwater available, which brought up questions around whether rain water collection would be permitted under current water laws in Washington State. 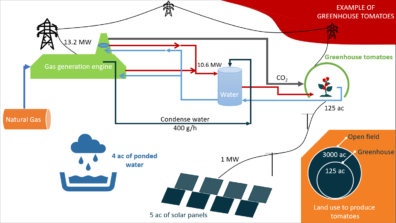 We plan to use a modeling system for greenhouse production to explore the potential to produce more food without exacerbating existing competition between different water uses in Washington State. Greenhouse production may even have the potential to alleviate some of those friction points due to higher resource use efficiencies (though it could lead to other issues, given their higher energy use). We will apply our simulation model to:

This work should inform the decisions of those in the food sector who are considering adopting greenhouses, policy-makers considering incentives to produce more food with less resources, as well as planning agencies who need to be cognizant of the impacts of large-scale adoption of greenhouses on the water and energy sectors.

This article was revised from the original version, titled “Greenhouse Production of Vegetables: Implications for the Regional Food-Energy-Water System,” published in November 2019 as part of the following report: Hall, S.A., Yorgey, G.G., Padowski, J.C., Adam, J.C. 2019. Food-Energy-Water: Innovations in Storage for Resilience in the Columbia River Basin. Progress Report for the Columbia River FEW Project. Available online at www.fewstorage.wsu.edu.