Global-scale changes—economic, sociological, climatological—have important ramifications for local communities. For example, land-use change alters the balance of food, energy, and water resources within a basin. The research group I am part of is interested in understanding the future impact of land-use change in the Columbia River Basin. This requires first understanding how land use is expected to change, and then exploring the impacts of these changes on the different sectors. 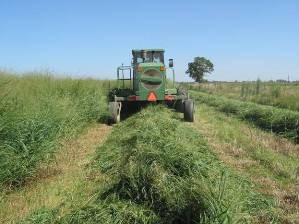 The Global Change Assessment Model (GCAM) simulates supply and demand of fuel and agro-forestry commodities at the national level under a set of standardized greenhouse gas emission scenarios known as representative concentration pathways (RCPs). In the model, markets in food and fuel determine how land use changes. Biofuel is among the industries expected to benefit from low carbon emission policies (Figure 1). To be meaningful within the Columbia River Basin, the broad-scale changes in land use for biofuels and other crops must be disaggregated to a finer scale. Our goal is to apportion Basin-wide land-use changes to individual grid cells based on the underlying variations in the land and how suitable the local climate is for various types of land use. The method for doing this is called “spatial downscaling.”

Our team adopted an existing downscaling tool, Demeter, to map the global land-use change predictions from GCAM onto grid cells across the Columbia River Basin. Demeter works by disaggregating land area among grid cells, subject to constraints we placed on the intensification or expansion of each land type. Suppose for instance that GCAM projects an increase in wheat production across the Basin (which we will call the “target increase”). Demeter first searches for all grid cells containing wheat and tries to match the target increase in wheat area by increasing the proportion of wheat in those cells (intensification). If intensification cannot fully match the target increase, then the remaining increase in area is spread out to surrounding grid cells where wheat is not currently grown, but that are suitable for wheat production (expansion).

Some land-use changes are constrained by regionally relevant factors, so we modified Demeter to incorporate those. First, we added a constraint based on water rights. Irrigators must acquire a right to irrigate. Therefore, the places of use of all water rights constrain the expansion of irrigated agriculture in the model. Our second constraint restricts cropland to land that is suitable for cultivation.

Once we had downscaled projections of future land-use change in the Columbia River Basin, we modeled the changes in agricultural water demand and crop yield that would result from those changes using the coupled hydrology-cropping systems model VIC-CropSyst. We targeted two different research questions:

Preliminary results suggest that a low-carbon future (RCP 4.5), achieved through aggressive global carbon policies, would lead to a large increase in acreage for biofuels: from a baseline of zero in 2015 to 3 million acres by 2060. By comparison, our results indicate that a high-emissions future (RCP 8.5) would result in 800,000 acres planted to biofuel crops (Figure 2A). We expect biofuels expansion to occur primarily by converting marginal lands, currently covered by forest and grassland (Figure 2C and D). Nevertheless, GCAM does predict a decrease in food production acreage (Figure 2B), especially for fruits and vegetables. 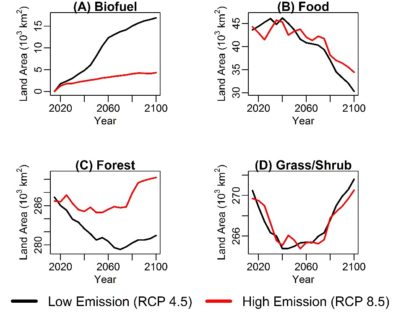 Figure 2. Trends in land use through the end of the 21st century in the Columbia River Basin, showing expected increases in area dedicated to biofuel production (A), decreases in area for food production (B), and changes in forested (C) and grassland/shrubland (D) area. 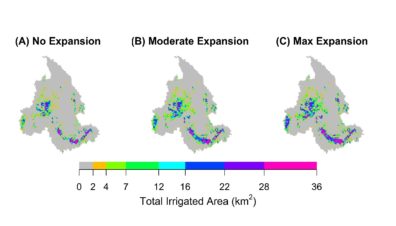 The reality of global trade in food and fuels means that land-use changes in the Columbia River Basin will be influenced by overseas markets. Water regulators and land-use planners should be mindful of such factors—both inside and outside the Basin—that lead to land-use change, such as our modeling captures. But questions remain. In the next phase we aim to quantify the energy production from biofuels compared to that from hydropower and to calculate the total irrigation demand under each scenario. The irrigation demand will be compared with water supply to determine curtailment rates within selected watersheds to give a rough assessment of the feasibility of each expansion scenario.