By Antoinette Avorgbedor, Intern at Washington State University’s Tree Fruit Research and Extension Center and the Center for Sustaining Agriculture and Natural Resources 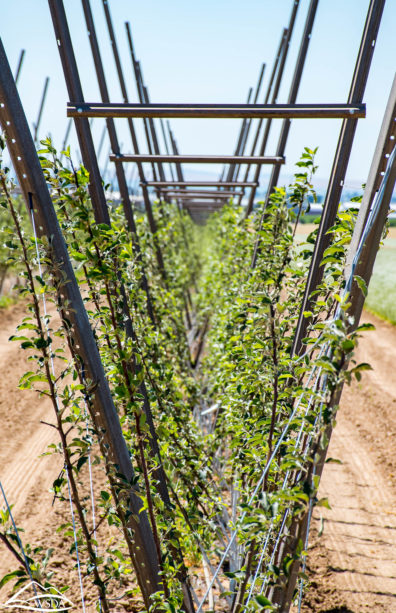 There has been a steady increase in orchards planted with sparsely branched, thin trees at increased tree planting densities. Photo: Washington State Department of Agriculture under CC BY-NC 2.0.

I have been curious as to why apple trees in modern, commercial orchards don’t look like the cartoon drawing that I grew up seeing with a thick trunk and a wide, round canopy of leaves. Modern tree fruit orchards are planted with a goal of maximizing efficiency and productivity. Mechanized operations are ideal for high-value, large operations to increase profitability. Consequently, there has been a steady increase in sparsely-branched thin trees that are usually more simply pruned. These planting systems are accompanied by increased tree planting densities. Over the last 50 years, densities have increased from 40 trees/acre to in some cases more than 3,000 trees/acre. There are many benefits to this new system of orchard management, but not without a cost to producers. The question is, will the balance of benefits and costs change as the climate changes?

There are some “tree planning” principles that have been developed to ensure high yield in apple production. First, trees must intercept a high percentage of available light from their environment. Consequently, trees with thick canopies have been shown to produce poor quality fruit. For that reason, modern canopies have been trained to have narrow canopies where light penetration is maximized for both sides of the canopy. These simplified thin canopies are much more adaptable to high-labor or mechanized farming practices like thinning and fruit picking. However, high density orchards are such that each additional tree added to the orchard has smaller and smaller economic benefit than the tree before. The idea is that one can increase the tree density of an orchard until any further increase ceases to affect profitability similar to the law of diminishing returns.

One of the most popular orchard training systems that incorporates these key principles and improves apple tree productivity is the tall spindle system. Robinson et al. (2013) reported tall spindle as the most efficient method that has been tried and tested for many years in the United States. The pruning needs of this style is relatively less expensive and labor intensive than most other training systems. In general, it is 10 feet tall with a really small trunk and there are no primary branches to speak of, just “feathered” thin branches. It sits along a three-wire trellis with other trees, spaced about three feet apart, in rows 11 feet apart, on a dwarfing rootstock. 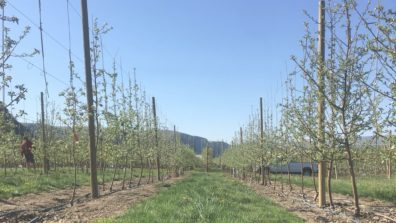 The vertical trellis system, also known as the v-trellis system is also common to Washington State apple growers. The trees are trained to maintain a narrow pyramid shape at a height of 10 feet. It requires a bit of pruning but nothing too extensive. They are also supported by trellises just like the tall spindle system. Both v-trellis systems and tall spindle, being high-density orchard systems, commonly bear between 15 to 20 apples per tree in the second or third year after planting. In contrast, low-density orchard systems generally require five years to come into production.

Although high-density orchards enter production earlier and are highly profitable, they can be difficult to establish because of expensive trees and labor-intensive training systems. The trees can have wide-spaced branching that may be beneficial to fruit development. However, the climate in eastern Washington, where the majority of apples in the United States are produced, is characterized by high temperatures and high light intensities. These conditions can also adversely affect apple development by causing fruit sunburn and related disorders. Apples affected by sunburn have reduced marketability or might be discarded as harvest losses. This sunburn may occur more frequently in high-density planting systems. As a result, are apple growers in Washington State more likely to experience more challenges as climate change leads to more extreme weather? Are current systems, practices and solutions to these drawbacks sustainable for the longevity of the industry? As apple orchard training systems continue to be optimized for production efficiency, it is pertinent to consider changing climatic conditions as part of the research agenda, so as to develop deeply sustainable approaches to orchard planning.

2 thoughts on “The Modern Apple Orchard: What Does It Entail?”