By Keyvan Malek, Civil and Environmental Engineering at Cornell University

In an earlier AgClimate.net article I discussed studies that have looked into the effects of investments in efficient irrigation technology on other water-related sectors. I argued that many studies have concluded that such investments might have negative implications for other water users, such as farmers or energy producers. I also mentioned that we were studying this issue, and promised to report our findings. This article and our soon-to-be-published paper deliver on that promise.

Why we did what we did 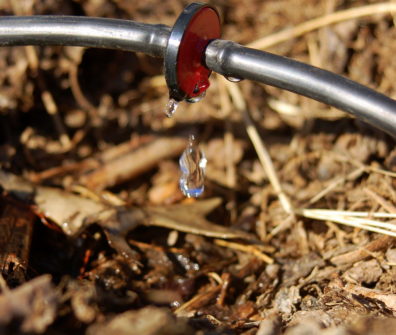 Questions still remain around the impacts across a basin and for multiple water use sectors of more efficient irrigation systems, such as drip irrigation. Photo: Joby Elliott under CC BY 2.0.

Among agro-hydrologists—people who study the dynamics of water in agricultural systems—it is a widely accepted fact that one farmer’s investment in new, irrigation efficiency technologies negatively affects other farmers and sectors. However, questions remain, as past studies have not explicitly quantified the impacts of new irrigation systems on other sectors. What is the implication for overall agricultural productivity? How do efficient systems impact the ecological condition of the basin? How do energy production and demand change as people switch to more efficient systems? Are there any social implications? And do these productivity, ecological, and social implications change as the climate changes?

Most modeling frameworks used in other studies tend to simplify significantly the complicated nature of interactions between agricultural and physical processes, water rights, and the operation of dams and other water infrastructure (note that the italics on the word “significantly” do not adequately emphasize this issue), and do not evaluate the compound impacts of climate change and irrigation technology improvements. For over a decade we have been developing coupled physically-based modeling frameworks that mechanistically capture key water, agricultural, and human decision-making processes.  We used our coupled modeling frameworks to quantify the impacts of investing in efficient irrigation technology on different aspects of the connected food-energy-water system in the Yakima River Basin.

We considered eleven different climate scenarios: one is historical and ten are future scenarios. We also have three irrigation efficiency investment scenarios:

When we compared a variety of metrics of agricultural productivity, ecological processes, and socio-economic factors across the three irrigation efficiency scenarios, under historical and projected future climates, we found that: 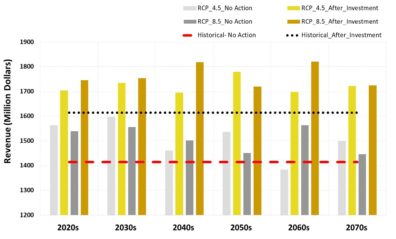 Figure 3. Improved economics of the agricultural sector with investment in more efficient irrigation technology, under the projected climatic conditions in 2020s to 2080s decades.

Three points I’d like to add. First, I want to be clear that it is almost impossible to generalize our findings, simply because they are controlled by factors, such as the structure of water rights and reservoir systems, that are only applicable to the Yakima River Basin. If you are a decision-maker in a different basin, and you want to know what would happen if you supported a farm-level water conservation initiative, you really need to look for region-specific studies that consider all the key details of your area; studies from other places might be really misleading. Ironically, this “lack of universality” is our universal and transferable take-home message.

Second, don’t forget other sectors. Impacts may extend beyond agriculture, as we saw in the Yakima River Basin. And third, although we are confident that this study is a significant step towards a better understanding of interactions between agricultural systems, water resources, and other water-dependent sectors, there are many scenarios that we did not take into account. For example, we only consider status quo water rights, but what if water regulations change in future? What if the way that water rights are enforced changes? Stay tuned: the WSU team is currently tackling these questions too.

This article is modified slightly from Malek, K., Adam, J.C. 2019. Are Efficient Irrigation Technologies a Winning Solution in the Yakima River Basin? in Hall, S.A., Yorgey, G.G., Padowski, J.C., Adam, J.C. Food-Energy-Water: Innovations in Storage for Resilience in the Columbia River Basin. Progress Report for the Columbia River FEW Project. This Report will be available online at www.fewstorage.wsu.edu in November 2019.

2 thoughts on “Are Efficient Irrigation Technologies a Winning Solution in the Yakima River Basin?”