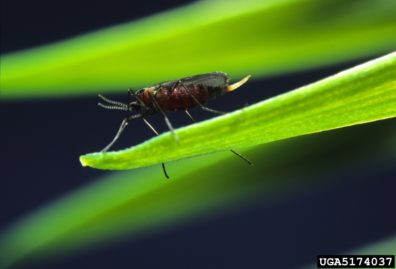 As climate change is occupying more space in public discourse, it is easy to focus on the attention-grabbing headlines about loss of sea ice, warming oceans, and more intense and frequent wildfires. Often overlooked are the seemingly subtle effects a changing climate presents and the ramifications these subtle changes can have. For example, let us discuss a modest pest of Pacific Northwest wheat, the Hessian fly.

First observed in the inland Pacific Northwest in the 1930’s, the 1/8-inch long Hessian fly causes damage when larva feed on young plants’ primary and auxiliary wheat tillers, leading to increased lodging and reduced yields. Wheat is the preferred food source for Hessian fly, but barley, triticale and rye species are alternate hosts. The larva form pupa or “flax seeds” in the stem which protect them until favorable conditions allow for emergence, egg laying and a repeat of the life cycle.  In the inland Pacific Northwest, conditions have typically allowed one to two generation of Hessian fly per season, occurring at a time that mainly threatens spring wheat crops (Castle del Conte et al. 2005). A heavy infestation of Hessian fly in susceptible spring wheat can result in 11-24% loss in grain yields (Smiley et al. 2004).

Current mitigation strategies include planting resistant varieties (such as Ryan, Tekoa, WB6341 and others), crop rotation with non-host species to prevent pest population build-up, delayed winter seeding or early spring seeding that avoid the fly’s most active season, and insecticide application when necessary. The warmer falls and wetter springs expected as the climate changes are likely to result in more than two generations of Hessian fly in a growing season (Eigenbrode et al. 2017). This could lead to some of these mitigation strategies—like timing of seeding—losing effectiveness and could potentially allow the pest to infest winter wheat more frequently as well.

A broad cross-over of Hessian fly from spring to winter wheat in the inland Pacific Northwest would present two significant challenges. The first challenge is scale. Winter wheat occupies roughly ten times more acreage than spring wheat in any given year. If Hessian fly biotypes were to impact winter wheat regularly, the potential regional economic consequences could be multiplied accordingly. The second challenge is the lack of resistance genes to Hessian fly in available winter wheat varieties. A recent examination of winter wheat varieties adapted to the Pacific Northwest showed that over 96% of them are fully susceptible to Hessian fly (N. Bosque-Perez, University of Idaho Entomologist, personnel communication). An increase in winter wheat infested with Hessian fly currently would necessitate more frequent insecticide applications to a crop that rarely needs any and further erode the region’s cash crop’s profitability. Further, such an occurrence would result in insecticides being applied to significantly larger acreage annually. 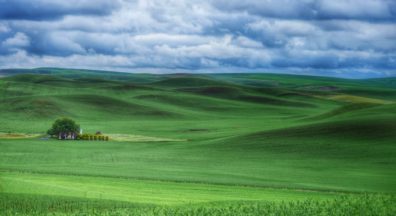 Winter wheat occupies much more acreage than spring wheat, so if Hessian fly were to impact winter wheat regularly, the economic consequences would multiply. Photo: Peggy Carlaw under CC BY-NC 2.0.

The good news is this issue is being addressed by regional experts in entomology and winter wheat variety development. The bad news is that until resistance can be introduced widely to well-adapted commercially-available winter wheat varieties, we are left with crop rotation and the hope for cool falls and dry springs as the best mitigation practices. Climate change’s threat to our agricultural systems is not all about droughts and severe weather. Sometimes it’s as subtle as a 1/8-inch fly getting one more shot at reproduction per season.