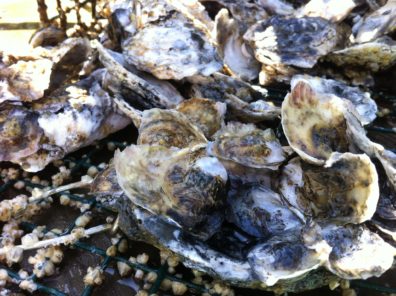 Oysters, an important industry in the Pacific Northwest, is vulnerable to ocean acidification. Photo: Steve Freeman under CC BY 2.0

I recently enlisted colleagues to write a blog article about the impact carbon dioxide emissions have on the Pacific Northwest oyster aquaculture industry. While reviewing the blog I realized that ocean acidification is probably a little-understood feature for many of us.  Therefore, I went in search of articles and videos that explain the science of ocean acidification, and its impact on ecosystems and economies.

The Chemistry of Ocean Acidification

The National Oceanic and Atmospheric Administration defines Ocean Acidification as a reduction in the pH of the ocean over an extended period of time, caused primarily by uptake of carbon dioxide (CO2) from the atmosphere. Being a science geek fascinated with chemical reactions, I wanted to find a webpage that could explain this process. The Chemistry of Ocean Acidification, is explained fairly simply in this webpage from the Climate Interpreter. The gist of the chemical process is that carbon dioxide (CO2) reacts with ocean water (H2O) to form carbonic acid (H2CO3).  This lowers the pH of the water, making it more acidic.  It also reduces carbonate ions needed to build shells and skeletons. This BBC news webpage provides a more complete description and illustration of the acidification process and its impact on the marine food chain. 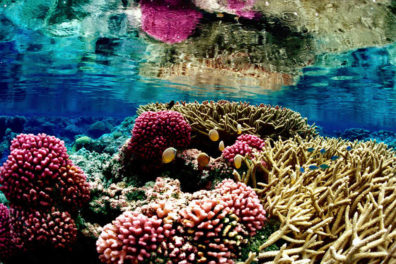 Calcium carbonate is the building block for shell formations in coral reefs and shellfish. Photo: Jim Maragos/USFWS under CC BY 2.0.

The Consequences of Ocean Acidification

As ocean pH drops, it becomes more difficult for calcium carbonate to form, which is the building block for shell formations (for both shellfish and coral reefs). The severity of this problem is demonstrated in this video developed by PBS NewsHour, Acidifying Waters Corrode Northwest Shellfish. In this video, scientists at Woods Hole Institute in Massachusetts project that ocean acidification could reduce shellfish harvests in the U.S. by 25% over the next 50 years. As Vasan and Kling described in their recent blog article, oyster farms can adopt a variety of adaptation practices that will help mitigate losses in the next few decades. For example, oyster aquaculture farms can control the pH level in their systems by only allowing water into the aquaculture system when acidity levels are low, or adding sodium carbonate or eel grass to balance the pH.  However, NOAA scientists in this video caution that this won’t work later in this century, as there will be fewer and fewer times in which the acidity will be low enough to avoid damage the young oysters. Unless, of course, carbon dioxide levels in the atmosphere are reduced. This study, published in Oceanography, provides a much more detailed description of the impacts in the Northwest, along with adaptation strategies that are being implemented in response.

Eelgrass is part of adaptation practices to balance pH and mitigate the impacts of ocean acidification. Photo: Bob Orth/Virginia Institute of Marine Science under CC BY 2.0.

Not Just a Pacific Northwest Problem

As the earlier blog indicated, ocean acidification is a current threat to the Pacific Northwest oyster industry. But ocean acidification is also an issue in many other U.S. states. For example, in Maine, estuaries are experiencing periodic influxes of highly acidic water due to heavier and more frequent rain events. Check out this Earthzine article that explains how these influxes of acidic water are threatening Maine’s oyster industry. Or if you prefer to absorb information visually, check out this News Center Maine video. In addition to explaining the impacts of ocean acidification, this video also highlights other impacts of climate change such as sea level rise, and increasing water temperatures. These changes are causing shell disease and inhospitable conditions for tiny plankton that are critical in the food chain. They are also causing property damage and reducing real estate values. For information on other states impacted by ocean acidification, check out these fact sheets from the Natural Resources Defense Council. They are based on a 2015 study titled “Vulnerability and Adaptation of U.S. Shellfisheries to Ocean Acidification,” published in Nature Climate Change.

As you might expect, it is not just a Pacific Northwest problem, or even a U.S. problem. Ocean acidification affects the entire world’s oceans. It influences fisheries, recreation, tourism, and coastal protection. As much of the world (some sources say over a billion people, others up to three billion) depends on seafood for a protein source a disruption in the marine food web could have very large socioeconomic implications, disrupting more than just our food supply. As such, it is important to recognize that human activities contribute to carbon dioxide emissions, and we are changing more than just the air temperature.  It changes water chemistry and water temperatures as well and endangering vital food and income sources, which threatens health and economic security.