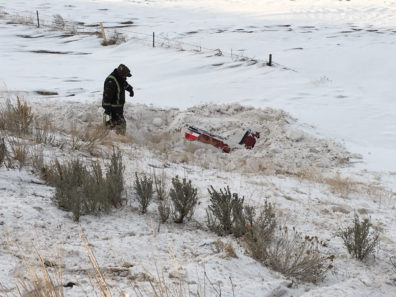 If you live in the Northwest, you either experienced first-hand or certainly heard about this past week’s blizzard in eastern Washington State.  This area does not usually get much precipitation over the course of a year.  During the winter, they may typically get a few inches of snow in any given storm. This storm, however, took many people by surprise and dumped 2-3 feet of snow in parts of eastern Washington, while bringing in winds from the east and temperatures in the low teens. Over 1,600 dairy cows were killed in this freak blizzard. At an estimated $2,000 per head, that is a loss of $3,200,000, spread over a little more than a dozen farms. That is huge unforeseen expense for struggling farmers to absorb, and a large amount of dead animals to dispose of safely.

Discussions about climate change frequently focus on the future and what actions can be taken to prepare for future climatic conditions. This past week’s extreme winter weather, however, suggests that the future is here. We do not know to what extent—if any—climate change contributed to this particular set of storms. Nevertheless, we do know that extreme weather events are becoming more common and that we can expect more of these events, as global average temperatures continue to rise. Check out these brief audio clips and online articles on strategies that will allow dairy and livestock operators to prepare now.  These tips can help producers react quickly and effectively to extreme weather events to come in the future, and limit the risks and costs to their operations: