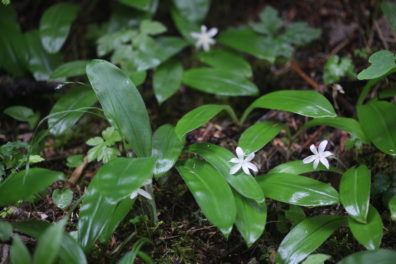 “Nature’s Notebook” is an app that can be used to collect phenology data such as flower timing. Photo: C. Schnepf.

Trying to understand how climate is changing, and how these changes affect the crop yields, forest growth, water from melting snowpacks, and all the other parts of our natural world, is very challenging. Increasingly, some of the primary tools for understanding these phenomena are models.

One of the biggest misconceptions about models is the idea they are not based in the real world – that they are just theoretical constructs, untethered to actual measurements. There are models like that – even philosophers are playing with models these days. But most of the models used in the natural sciences depend on empirical data – measurements of things like temperature, precipitation, crop yields, tree mortality, and many other attributes. The more relevant data that is collected to support models, the more helpful they will be to making decisions, by helping us accurately describe what has happened recently and projecting what might happen in the future. Nearly all of us use these kinds of models every day, in the form of local weather forecasts. But at some point, collecting larger amounts of field data requires more people.

People’s day to day experiences with their local environment often play a large role in how they view climate science. In a sense, we are all walking around collecting data every day about what is happening locally. Some people actually get quite meticulous with this. For example, I have met many landowners who keep detailed records of precipitation collected in their rain gauges. With just a little nudging, this natural instinct to monitor our natural world can be harnessed to formally add to the effectiveness of scientific research associated with climate and related phenomena. The common term for this is “citizen science.” Citizen science can have many variations, but it basically enlists volunteers in efforts to collect data that will support scientific research.

Citizen science can involve recruiting volunteers to go into the field together with the researchers to get more hands in collecting data. But data can also be collected in less directed, cumulative ways, not tied to a specific research effort. With the advent of smart phones and tablets, such efforts are increasingly done in the form of mobile device computer applications (“apps”), where people collect data and upload it to a cloud, both to track their own measurements and to make it accessible to scientists. Here are three examples of apps that support citizen science related to climate. All three are available on both Android and IOS operating systems:

Nearly every conversation I have had with landowners on climate suggests they prefer guidance on climate effects in the context of local conditions and management decisions. But many of the folks who work with climate models are quick to point out that their projections are for broad regions more than local communities. Citizen science is a great way to collect richer local data to improve climate models to better reflect local conditions and provide locally relevant projections. Citizen science apps help people collect those data in ways that fit with their busy schedules. In the process, participants are also enfranchised in climate science and gain insights into scientific processes.