What will climate change look like on Pacific Northwest rangelands, which cover a huge area of our region? It will undoubtedly have complex impacts on the physical environment, environmental stressors, socio-economic factors, and the animals, plants, and other rangeland organisms. Recently, I took a look at the literature to see what the state of the science is relating to rangelands’ vulnerability to climate change. While there are a number of relevant studies that I mention below, I focus in this article on one of the few quantitative analyses, led by Matt Reeves, that updates Reeves’ previous work that was also discussed on agclimate.net. 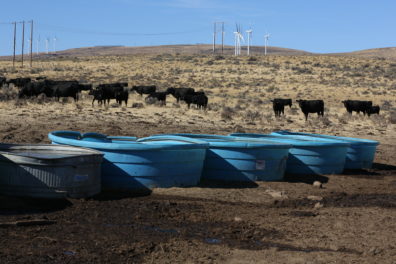 In the Pacific Northwest, net primary productivity, which determines forage availability, is likely to increase by mid-century (with increases also expected in the Northern Plains region and decreases in the Southwest and Southern Plains) (Reeves et al. 2017; green in Figure 1A). Other scientific teams using different methods have suggested similar impacts. This increase in productivity is likely to benefit Northwest ranchers, especially when considered in light of the decreases in productivity in more southern regions.

Figure 1. Expected changes in A) net primary productivity index (positive values, shown in green, represent an increase in NPP) and B) expected changes in year to year variability (negative values, shown in red, represent an increase in variability) by 2050-2060. Changes are shown as +2 to -2 index, compared to historical baseline of 2001-2010. Projections shown were developed using a high greenhouse gas emissions scenario known as A2, and future climate projections from the 3rd Coupled Model Intercomparison Project (CMIP3). Data from Reeves et al. 2017. Visualizations by Rajagopalan et al., unpublished.

However, increases in productivity are accompanied by higher variability from year to year in many areas (red in Figure 1B), which will likely exacerbate challenges for cow-calf operations, as unexpectedly destocking in response to reduced forage production can create economic losses, and increasing herd size in response to higher-than-expected forage production generally takes more than a year (Neibergs et al. 2018). However, in a few areas of the Pacific Northwest, variability could decrease (green in Figure 1B). 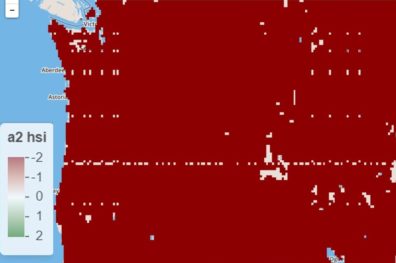 Meanwhile, across the western U.S., the same study projected a move from woody dominance toward grassier vegetation types overall but with considerable variation across the region. However, these projections assumed no fire suppression occurs. It remains to be seen whether fire suppression efforts will actually lessen, perhaps as climate change leads to larger and more intense fire events. Other research teams have suggested that climate does not have a large impact on whether or not woody species dominate, and that grazing history, fire regime, and soil type will continue to be determining factors (Polley et al. 2013). Rangeland vegetation is also likely to shift in response to climate change’s interactions with the potential for threats from invasive grasses like cheatgrass (Bromus tectorum), medusahead (Taeniatherum caput-medusae) and red brome (Bromus rubens) (Polley et al. 2013). This in turn could reduce forage quality and also contribute to larger and more frequent fires.

Last, Reeves’ results indicated a substantial increase in the number of heat-stress days for cattle across all regions beginning as early as 2020-2030 (red in Figure 2), including for areas of the Pacific Northwest that do not currently experience much heat stress. It is important to recognize that the heat stress data represented here are relative to the baseline period of 2001 – 2010, during which there were only a few cattle heat-stress days per year. In this region, the number of heat stress days by mid-century are projected to exceed 60 days annually in the A2 scenario. This may create a substantial need for adaptive strategies.

It is almost certain that ongoing climate change will substantially impact both cattle operations and the complex ecosystems that make up Pacific Northwest rangelands. Impacts in other regions are also likely to be very important for the Pacific Northwest, as these impacts will affect livestock economics across the U.S. The Southern Plains—with the current highest beef cow inventory—and the Southwest regions are projected to be negatively impacted for most indicators relevant to rangeland livestock production, rather than some indicators pointing to negative impacts and some to positive impacts, as in the Northwest. Relative advantages may thus shift to the Northern Plains and Northwest regions, despite some important challenges here.