Topsoil has often been referred to as the “thin skin” of our planet, essential for producing the food that feeds us. Because it’s not easy to create new topsoil, conserving the soil that we have is essential for maintaining our region’s agricultural productivity. Reducing tillage, and leaving residue on the soil surface, is a proven way to reduce erosion. As residues break down, they increase the concentration of soil organic matter at the surface of the soil and help to form soil aggregates—a composite of soil particles that clump or bind together, giving soil its structure. Soil that is aggregated in larger particles is less prone to being eroded by the wind. And soils with more organic matter also benefit the climate, by storing more carbon. 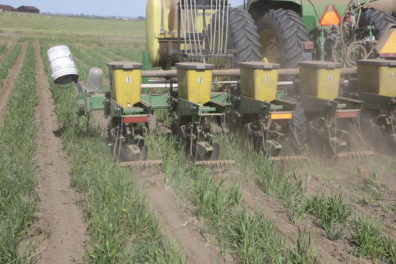 Planting the wheat cover crop in strips makes planting corn easier, as the planter does not encounter roots and leaves in the planting strip. Photo: Darrell Kilgore

While these principles have long been known, many irrigated crops still rely on tillage.  There are a range of reasons for this, including historical systems that have relied on tillage, concerns about planting and weed management, and other real and perceived challenges. However, there are a growing number of irrigated producers who are developing viable alternatives, and I had the privilege of profiling a few of these individuals in my case study work. In the Columbia Basin, Lorin Grigg and his father have developed a strip tillage strategy that includes a cover crop, reduces wind erosion and protects onion and corn seedlings during the spring. They have used this strategy to grow onions for many years, protecting the farm’s fine sandy soils from wind erosion, particularly during windy conditions in the spring and fall. 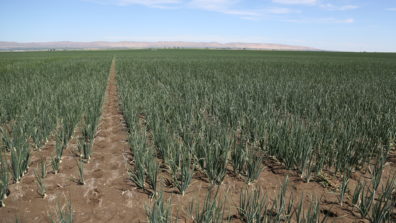 With irrigation and warm temperatures to accelerate decomposition, little residue is left by mid season. This photo was taken in late June 2015. Photo: Darrell Kilgore

While this strategy benefits the climate, it has also had direct economic benefits for the Griggs. In the spring, windblown sand can also destroy young seedlings. When this happens, farmers have to replant at significant expense, or, if the planting window for the primary crop has passed, convert to another, generally less profitable, crop. Sand-blasting is particularly risky for onions, because seed is small, expensive, and slow-growing. In this context, strip tillage acts as a form of insurance that reduces the risk of losing onion seedlings. As Lorin says, “Once in a while we may not have a windy spring, but most of the years it’s very windy here. If I put a cover crop in, I’m pretty much guaranteed that I can sleep at night and let the wind blow and not have to turn the water on” (wet soil is not easy for the wind to carry).

I invite you to  and read about it in the case study on strip tillage for onions and sweet corn that was recently published. You can also view a video that shows the field operations in more detail. And if you’d like to dig more into the science of high residue farming, I’d encourage you to explore an extension bulletin by CSANR’s Andy McGuire called “High Residue Farming: The What and Why”.