In non-irrigated areas that are too dry to support annual cropping, fallow (the practice of leaving land unplanted) preserves soil moisture for future crops. However, annual fallow combined with conventional tillage has resulted in a net decrease in soil carbon over time in our region, with negative impacts to soil health across large areas. And even when tillage is eliminated, it is very difficult to maintain soil carbon over time in a wheat-fallow system.  For this reason, the impact of climate change on the frequency of fallow in crop rotations has important future implications both for soil health and for opportunities for carbon sequestration.

Two papers published last year by Kaur et al. and Karimi et al. use modeling to project the impacts of climate change on dryland cropping systems. Of specific interest in both studies was the anticipated effect of climate change on the frequency of fallow in crop rotations in the inland Pacific Northwest. Reading these papers revealed interesting, yet divergent, findings that seemed worth sharing here.

In the first paper, Kaur and colleagues use modeling to predict shifts in agroecological classes (AECs) in dryland areas in response to climate change scenarios. Agroecological classes are defined based on actual land use/cover from 2007 and 2014 and consist of: (1) annual crop (<10% fallow); (2) annual crop-fallow-transition (10—40% fallow); and (3) grain fallow (>40% fallow) (Huggins et al. 2014). Dynamic AECs are defined as those areas that changed classes. The AEC of a particular area, thus, indicates the frequency of fallow for crop rotations in that area.

Kaur and colleagues determined the most important bioclimatic variables driving the current distribution of dryland AECs. Then, they projected how current AECs would shift if they imposed future climate change projections (and associated changes in these bioclimatic variables) on top of today’s technological, environmental, and cropping system situations. Projections were made for the years 2030, 2050, and 2070 (Figure 1). Their results suggest an increase in the amount of cropland in dynamic AECs and fallow-based AECs. An increase in fallow would have negative implications for soil health, increasing the potential for erosion and decreasing soil organic matter levels and biological activity. 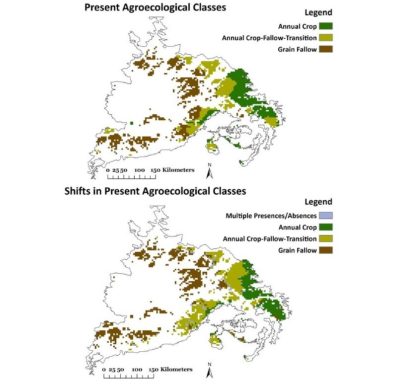 Karimi and colleagues took a different approach, using a process-based cropping system model to predict future changes in AECs. This model predicted that more efficient use of existing precipitation (through the “carbon fertilization” effect) and earlier start to the growing season under projected climate scenarios, more than compensated for increases in temperature and decreases in precipitation, resulting in increased yields. By the 2070’s, total grain yield is projected to increase anywhere from 18% to 65% beyond historical levels, depending on the specific greenhouse gas concentration trajectory and AEC assessed. Because of these changes, Karimi and her colleagues predicted that by 2070, under the scenario involving greenhouse gas concentrations increasing at rates consistent with current trends (no mitigation), the fraction of area in crop/fallow will decrease from 40% to 34%, while continuous crop area will increase from 19% to 30% (Figure 2). Thus, these authors predict a decrease in the use of fallow and, increased opportunities for cropping system intensification and diversification. However, one important caution to this somewhat optimistic outlook is the carbon fertilization effect provides a limited benefit, so that one would expect that beyond the 2070 timeframe explored in the study, increased negative impacts of climate change could start to outweigh the positive effects of carbon fertilization.

These study results left me puzzled. Why were the predictions of these two research teams so contradictory? The teams used very different modeling approaches to answering the same question. While the increase in CO2 concentration was significant in the findings of Karimi and her team, Kaur and coauthors did not take into account the effect of increased atmospheric CO2 on crop productivity. Kaur and team also bring up an important limitation to both studies: that future changes in global markets and other socio-economic factors, which were not included in either study, will be critical drivers of farmers’ cropping decisions.

These two papers, published in the same journal issue, remind us of the importance of considering multiple studies on any given topic. It is also important not to underestimate the complexity of the effort involved here, in going beyond forecasting growth for one crop, to attempting to forecast cropping patterns across the landscape. Much uncertainty remains regarding the anticipated effects of climate change on agricultural systems in our region and there is a need for ongoing rigorous, peer-reviewed studies. As shown by the papers by Kaur, Karimi and their teams, two such studies can result in vastly different predictions. While I hope that the Karimi prediction is more accurate with its rosier outlook for farmers, soil health, and carbon sequestration potential, I am reminded of some sage advice for approaching uncertain situations: “Hope for the best but prepare for the worst.” And, importantly, continue to follow the research results.

Stay tuned for a future post exploring a related paper by Jason Morrow on the topic of the impacts of climate change on soil organic matter in cropping systems in the inland Pacific Northwest.