Many countries enthusiastically plant trees that are not native to their shores. One of the best examples is New Zealand, which has extensive plantations of genetically improved Pinus radiata, a species native to northern California and known here as Monterey pine. If you noticed pine forests that humans, elves, and orcs scurried through in the Lord of the Rings movies (filmed in New Zealand), you were likely looking at planted, non-native trees.

North American forestry has focused on managing forests in ways that mimic historical ecology. One expression of that is a focus on native tree species. Native species can be regenerated by using silvicultural systems that rely on natural seeding from trees already on or near the site (e.g. the seed tree system) or they can be planted. The clearcut silvicultural system (and other systems, if natural regeneration is inadequate) typically rely on tree planting when the target species are conifers.

A lot of thought and planning goes into successfully planting trees. All that attention may be for naught, however, if the seed source for the trees is not adapted to the site. One level of that is the correct species for the site (e.g. ponderosa pine for drier sites, and other species such as larch or white pine for sites with more moisture).

But within species genetic adaptation must also be considered. Conifer species vary widely regarding flexibility for planting on different sites. For example, western white pine is a generalist  – we plant the same seed source for western white pine throughout the Inland Northwest. By contrast, the current recommendation for Douglas-fir seed in Idaho is to move it no more than 325 feet in elevation and 30 miles in latitude. 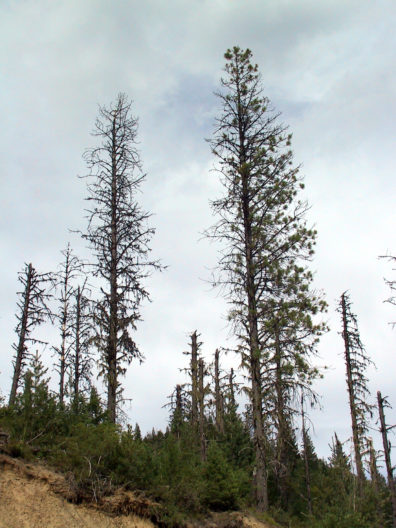 The consequences for moving seed beyond the recommended guidelines can be dramatic. For example, early in the last century, we did not have a solid handle on seed transfer limitations. Because of this, ponderosa pines from seed sources as far away as the Black Hills were planted on a variety of sites throughout northern Idaho, by people who were scrambling to get tree seedlings to plant sites that were burned in the 1910 fires and later re-burns. The striking thing about the ponderosa pines on those sites, isn’t just their poor growth on good sites, it is how they die. They are often severely impacted by needle diseases, fungi that normally have little impact on tree growth.

So what happens with seed source decisions as the climate changes? Scientists are re-evaluating seed source adaptedness to future climates. One way of doing this is via computer modeling, as with the Seedlot Selection Tool described in Holly R. Prendeville’s September 2017 article. But another way to assess different seed sources is through provenance tests, where trees from multiple seed sources are planted together on one or more sites, to test their relative adaptedness to various sites.

Due to anticipated changes in climate, there has been renewed interest in revisiting provenance tests. One of the best examples is the Assisted Migration Adaptation Trials (AMAT), an effort led by the British Columbia Ministry of Forests with a host of cooperators throughout the United States and Canada. The AMAT project is collecting seed from 15 different species and 48 different seed sources from Canada and the United States Pacific Northwest. They are being planted at 48 sites between the Yukon and northern California. The goal of the effort is to better understand the suitability of these seed sources when planted across a range of climates and latitudes. 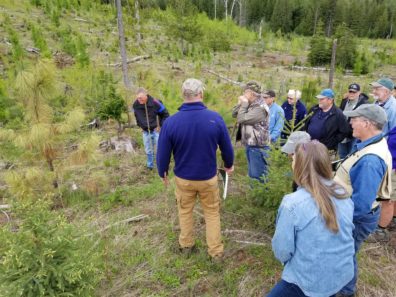 The AMAT effort includes five planting sites in Washington, Oregon, and Idaho. This spring, our Idaho Master Forest Stewards visited a testing site on Inland Empire Paper Company forest land west of Spirit Lake, Idaho. The site was planted in 2012 and you can already see which seed sources are thriving and which are not.

Even with data from tests like this, planting trees for future climates can be tricky. For example, a seed source may look well adapted to future climate, but not establish under current environmental conditions (e.g., spring frosts). Insect and disease vectors could also change in unforeseeable ways over the next 50 to 100 years, and that will also affect the suitability of different seed sources to a given site. Because of this, continued provenance testing will provide invaluable empirical data to integrate into reforestation decisions on seed sources that reflect changing climate.