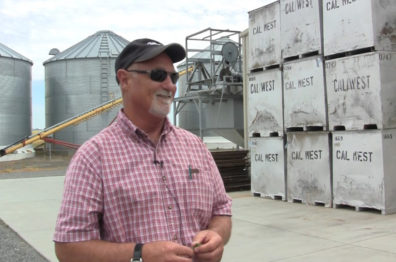 What are the climate impacts of a given farm practice?  While we know lots of strategies for reducing greenhouse gas emissions on farms, quantifying that impact can be difficult.  However, there is at least one farm in our region – one that uses some pretty neat practices – for which scientists have attempted to answer that question.  And the farmer just happens to be a long-time member of the Center for Sustaining Agriculture and Natural Resources’ advisory committee, Dale Gies.

Dale grows potatoes, wheat, and seed crops for vegetables and cover crops near Moses Lake, Washington. Over many years, Dale has developed a system that uses a mustard and arugula “biofumigant” cover crop to add organic matter, improve soil quality, and suppress soilborne diseases and nematodes in potatoes. CSANR’s Andy McGuire has long worked on mustard cover crops, which have shown potential for managing soilborne pests, including one fungal pathogen involved in potato early dying (Verticillium dahliae) and two parasitic nematodes (Meloidogyne chitwoodi and M. hapla). The pest-suppressing properties of mustard are mainly due to compounds called glucosinolates, though other mechanisms such as development of suppressive soils and systemic plant responses are also likely important (McGuire 2012). 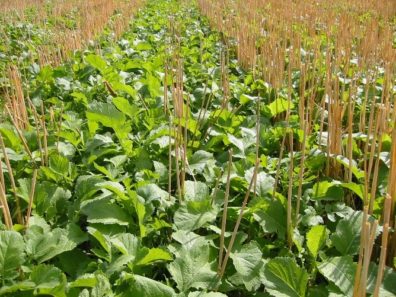 Though Dale grows mustard-arugula cover crops primarily for their biofumigant and soil-building properties, his system is also more climate friendly than the conventional system it replaces – as Lazzeri et al. (2010) have documented in a life cycle analysis. Life cycle analyses (LCAs) can be used to compare the impacts of different management systems. In this case, Lazzeri and colleagues used an LCA to track the impacts of cover cropping on multiple greenhouse gases which are responsible for human-caused climate change. The LCA compared Dale’s biofumigant potato-wheat rotation to a potato-wheat rotation that used chemical fumigation and no cover crops. The authors accounted for emissions associated with irrigation (for pumping), diesel use, as well as fertilizer and chemical production and use in both systems. To account for the differential impacts of various greenhouse gases, all impacts were expressed in terms of carbon dioxide equivalent emissions (CO2e). Results indicated that the mustard cover crop approach generated 700 kg of CO2e per hectare (625 lb CO2e per acre) less than the conventional approach.

Agricultural (and forestry) systems can also draw carbon dioxide out of the atmosphere and store carbon in the soil. When organic matter levels increase, additional carbon is sequestered. Soil organic matter content in Dale’s soil was around 0.6% when he implemented the biofumigant cover crop approach in 1997; by 2010 it had increased to 1.2%, a significantly higher level than other soils in the area. In the initial thirteen years, the biofumigant cover crop approach (including both soil carbon and the other greenhouse gas impacts discussed above) saved over 3,900 kg CO2e per hectare (3,500 lb CO2e per acre) annually compared to the approach that did not use a cover crop – though it is important to recognize that the amount of new carbon sequestered decreases over time, as soils will not continue to add carbon indefinitely.

You can hear Dale speak about his biofumigant system in the video below, and learn more about it in a case study.  You can also watch the process of incorporation, which is much louder than the no-tillage systems we also think of for building soil carbon!

Lazzeri, L., L. D’Avino, and D. Gies. 2010. Additional Benefits of the Efficacy in Containing Soilborne Pest and Pathogens with Biofumigant Plants and Materials. In A. Gamliel, J. Coosemans A. Vanachter, and J. Katan, eds. Proceedings of the 7th International Symposium on Chemical and Non-Chemical Soil and Substrate Disinfestation: Leuven, Belgium, September 13–18, 2009.