Biochar as a soil amendment has been the subject of much attention in recent years because of its ability to sequester carbon and to improve aggregation, water holding capacity, and organic matter content of soil amended with it (Lehmann, 2007; Marris, 2006). A recent post discussed what’s needed to economically produce forest to farm biochar. In contrast, researchers at Washington State University are investigating what we could call waste to farm biochar. Waste to farm biochar, if deployed on a larger scale, could offer a two-part benefit – removal of wood from the municipal solid waste stream and creation of a valuable product from this wood. In recent work, researchers are looking at two possible wastes that could be made into biochar: wood-based fractions of municipal solid waste and the large woody material remaining after compost production—referred to as “compost overs.” 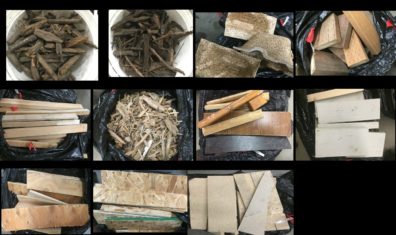 Wood-based products in municipal solid waste are extremely varied and include materials such as plywood, particle board, and furniture (Figure 1). They also include wood that has been painted or treated, which has the potential to introduce environmental pollutants that can have detrimental effects on crops and soils. Michael Ayiania, a Ph.D. student working with Dr. Manuel Garcia-Pérez in the Department of Biological Systems Engineering, has worked to characterize biochar produced from urban wood waste and compost overs and to examine potential pollutants—heavy metals, polycyclic aromatic hydrocarbons, and volatile organic compounds—in biochar produced from these municipal sources. 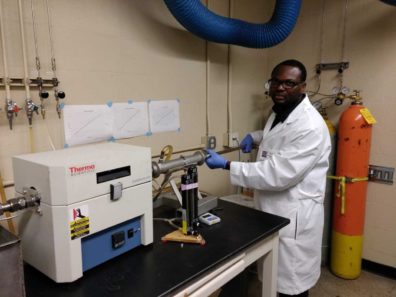 Biochar is made through a process called pyrolysis, which is a thermal conversion in the absence of oxygen. For this project, Ayiania prepared samples by grinding and sieving them, and then used a machine called a spoon pyrolysis reactor (Figure 2), set at either 400°C or 600°C, to create small batches of biochar from each of the feedstocks (Figure 3).

Ayiania investigated the fundamental characteristics of the resulting biochar that affect its usefulness as a soil amendment: fixed carbon and ash content, surface area, and micropore volume. Fixed carbon is the fraction of biochar that can persist in the soil for thousands of years. It is desirable for biochar used to amend soil to have a high fixed carbon content. A high ash content can also benefit cropland by raising the pH of acidic soils. Surface area impacts the reactivity of biochar; the greater the surface area, the more chemical interaction with the soil per gram of biochar. Micropores (Figure 4) contribute to the surface area of biochar and affect its ability to adsorb small molecules. For all feedstocks, the biochar with the best characteristics for use as a soil amendment (high fixed carbon and ash content, surface area and micropore volume) was obtained at 600°C.

The presence of metals in soil amendments can be an issue because of their tendency to build up in soil with repeated applications. In this project, potentially problematic concentrations of metals were found in painted wood (mercury) and treated wood (arsenic). Ayiania also monitored soluble organic compounds (in this case, compounds called polycyclic aromatic hydrocarbons – carcinogenic compounds that can be produced during pyrolysis that have a detrimental effect on soil quality and plant growth), but none were found in biochar from any of the feedstocks.

While treated and painted wood materials in this study were not suitable for use as biochar feedstocks due to metal concentrations in the resulting products, this study confirms that some wood-based fractions of municipal solid waste and compost overs can be suitable feedstocks for producing biochar as a soil amendment—waste to farm biochar—especially if produced at high temperatures.

This work was funded through the Waste to Fuels Technology Partnership between the Center for Sustaining Agriculture and Natural Resources at Washington State University and the Washington Department of Ecology’s Waste 2 Resources Program.