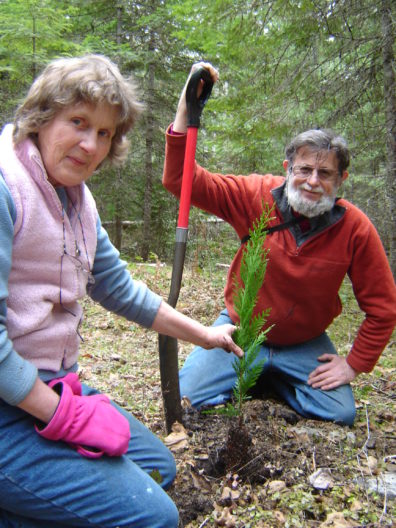 My mom called our forestland in northern Idaho a “spot of paradise.” Mom was the first to point out a grand fir that might fall, to see a moose on the pasture, and to notice Western larch needles changing color. She passed away eight years ago, and we try to honor her by caring for our forestland. Since my brother and I live far away, all of the work falls on Dad.

In my family, we’ve talked about climate change for over thirty years. The issues that arise from climate change—extreme weather events, migration due to drought, conflict caused by land issues, and more—will force all of us to recognize climate change as the most defining issue of our epoch. It will be the issue that unites us—or destroys us. If the latter, one spot of paradise that brings one family joy won’t matter. Or will it?

The idea that small things we might do on our family forestland could make a difference in terms of the global climate seems laughable. Nevertheless, as former Administrator of the Environmental Protection Agency and former New Jersey Governor Christine Todd Whitman suggests in an often-quoted line, “Anyone who thinks that they are too small to make a difference has never tried to fall asleep with a mosquito in the room.” There is every reason to prepare for expected forest fires.

When I think of global climate change, I think of forest fires burning hotter and faster close to our forestland, of fire fighters on the frontlines and coordination across agencies, and of how one acclimates to risk. Forests that are too dense are at greater risk of fire and disease. Root rot and beetles have killed many of our firs, but so far we’ve dodged western pine beetle infestations. (I highly recommend Andrew Nikiforuk’s Empire of the Beetle.) For years after my parents moved to the Idaho property they didn’t have a forest-management plan. Once they had one, in coordination with Idaho Department of Lands consulting foresters, we started clearing defensible spaces around the home place, creating a firebreak along property lines, and thinning dog-hair thickets. Educational programs helped, including: University of Idaho Forestry Extension courses; Idaho Master Forest Steward programs; and the University of British Columbia’s MOOC “Climate Change: The Science.” 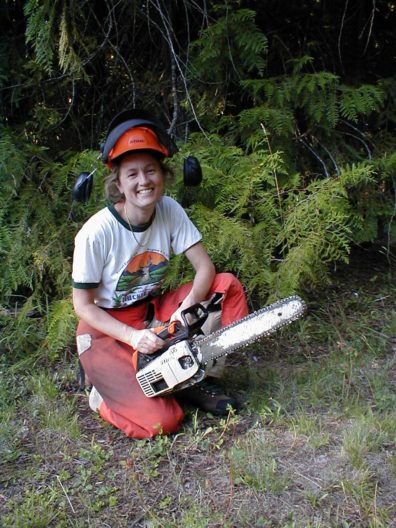 I joke that a forest management plan should include hearty adult children who move home to work—because that is what I did. In 2006, with a “hazardous fuels removal grant” from the Idaho Department of Lands, I left New York City and spent two years thinning dog-hair thickets and planting trees. Now almost all the thinning done to mitigate fire has grown back. A few acres where a logger made a few regeneration cuts have fared okay, but I want to start over. One learns by experience. One fails from inexperience. I’d love to continue to live on our family forestland—there is no other place I feel more at home—but my husband’s work means we live far away.

My parents’ forestland has a wonderful combination of fir species—Western Red Cedar, Western White Pine, Ponderosa Pine, Western Larch, Hemlock, Grand fir, a few Douglas fir, and hardwoods. A little creek runs north to south. National forest and industrial forestland border the property. The major risk of living at the interface between wilderness and development is forest fire. It’s not a matter of if a forest fire happens, but when. 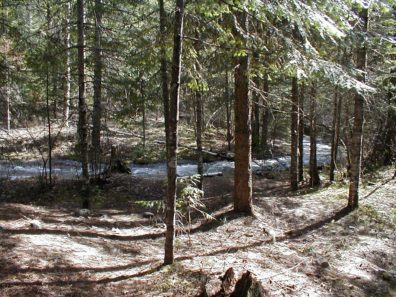 View of the creek on the D’Aoust forestland. Photo: Renée E. D’Aoust.

In The Songs of Trees, David George Haskell writes: “Given fire’s great variability, pointing to a ‘normal’ fire regime is impossible. Instead, careful study of soil and air can tell us fire’s current mood and maybe let us glimpse the future.” Preparation for forest fires is the same in my mind as wearing eye protection when clearing brush. When I’ve been pruning or using a brush saw, how often has a twig broken off, flinging directly toward my eyes? So often that I always wear eye protection.

If we have made any strides toward caring for our family forestland, it is because of my mom’s love for a “spot of paradise.” A few years ago, when a forest fire burned two miles away (when, not if, remember?), my dad put a few select items in the station wagon in case of an emergency evacuation. From my home far away, I read online updates from the National Interagency Fire Center, the United States Forest Service, and invaluable Facebook updates by the Friends of Scotchman Peaks Wilderness.

Dad emailed me a video of the top of a tree that exploded into flames—how crown fires often start. Next Dad sent me a video of a small, dusty, and frantic black bear tearing down a branch of our garden plum tree. Dad wrote: “Mom would have called the bear Andy. He can have the plums. Anything he needs.” There’s always something we can do—for ourselves, and for other living things that make up our spot of paradise.

Author’s bio: Renée E. D’Aoust is a writer and teacher. Her first book is Body of a Dancer (Etruscan Press), and recent anthology publications include Rooted: The Best New Arboreal Nonfiction (Outpost19). In 2017, she was a Scholar at the University of Washington’s “City/Nature: Environmental Urban Humanities” NEH Summer Institute. She volunteers as an Idaho Master Forest Steward and for Women Owning Woodlands. Her family’s stewardship forestland is in northern Idaho. Please visit www.reneedaoust.com and follow @idahobuzzy.