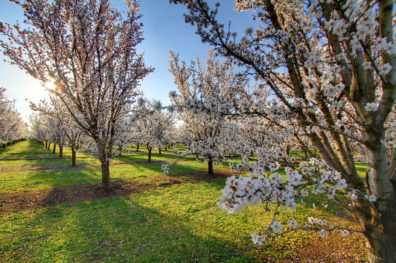 Could Northwest growers have an opportunity to cultivate potentially displaced California almonds in the future? Photo: Flickr user Nicholas D under CC BY-NC 2.0.

California cultivates roughly two-thirds of the nation’s fruit and nut crops, including virtually 100% of the US almond supply. Growing demand and high profit-per-acre have driven a doubling in almond acreage in the Golden State since 1995, including a nearly 100,000-acre increase in almond plantations between 2011 and 2015, despite that period coinciding with the most severe drought in the state in a millennium.

Climate change is projected to raise summer temperatures and crop water demand across the West. Increased winter temperatures will make accumulating necessary chill increasingly challenging for some crops in the decades to come. Considering the challenges of warmer temperatures and increased water demand, I used climate models and an understanding of almond’s bioclimatic requirements to assess how the potential range of almond cultivation may change over the next half-century, and whether Northwest growers could have an opportunity to cultivate almonds.

In collaboration with John Abatzoglou, I ran a simplified phenological model of the almond’s reproductive cycle across five western states. At a given location, the model runs year by year to determine whether bioclimatic thresholds are met. That is, for each year the model asks of the climate data: “Do winter temperatures ever drop below the cold hardiness threshold of -25°C? Are there at least 300 growing-degree days to reach full bloom, and ~3000 degree-days to reach harvest? Do daily minimum temperatures ever get cold enough to cause frost damage?” The answers determine if almond’s requirements are fulfilled that year.

At a given location, the model runs at an annual time step to determine if the temperature requirements needed for almond growth and development are met. Figure reproduced from Parker and Abatzoglou, 2017, with permission.

In this way, the model in effect “grows” almonds, logging when each phenological stage, from chill accumulation to harvest, is achieved. In the event that a stage is not achieved—perhaps the winter was too cold, or the summer was not warm enough to allow the crop to mature—the year is considered a “failed” year for development. If the conditions at a given location are “good” and an almond can “grow” from dormancy all the way through to harvest, then that year is considered a “success.” After assessing conditions each year over a multi-year period, we can assess the ratio of successful years to failed years, referred to as the species viability index (SVI), as a measure of the overall suitability of a location.

I then used data from global climate models to project how future climate may shift where almonds can successfully be cultivated. By the mid-21st century, even under conservative estimates of warming, temperatures will be conducive to almond cultivation in agricultural areas of western Oregon, portions of western Washington, and central Washington. Under future climate scenarios with higher rates of warming, these patterns are more pronounced and also extend into the Snake River Plain of southern Idaho. The potential for future expansion of almonds into the Northwest is primarily driven by reduced risk of spring frost and increasingly warm summers, which allow for sufficient heat accumulation for the crop to reach maturity. 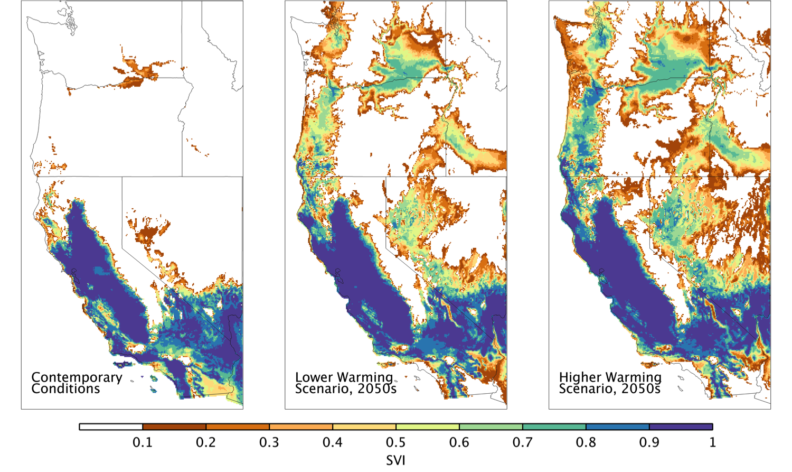 By the mid-21st century temperatures could be conducive to almond cultivation in western Oregon, portions of western and central Washington, and southern Idaho, depending on how much warmer future temperature get and how much risk potential almond growers can tolerate. Figure adapted from Parker and Abatzoglou, 2017, with permission.

While the study, published in Climatic Change, highlights the possibilities for future almond cultivation in the Northwest, it is important to caution that the suitability model is limited in its ability to capture the complexities of successful crop cultivation. For example, due to the challenges of modeling irrigation, the model does not account for the water component of an almond growing operation. Nor does it address challenges of excess or ill-timed precipitation, the potential for pests and disease, or the existence of microclimates. Additionally, the model is limited to a single cultivar of almond—the Nonpareil varietal— and uses growing degree-day thresholds calculated in California (which may not be precisely transferable to the Northwest). Finally, in using only the most conservative climatic thresholds for development success or failure (e.g. only allowing for a maximum of 20% crop damage from frost) the study is unable to account for the economic and social complexities of crop cultivation, including grower risk tolerance or ability to mitigate for adverse conditions.

The limitations of this study underscore the need for further research on the production potential for perennial crops in the future. However, orchards planted today will still be in production when these projected climatic changes come to pass, so recognizing potential novel cultivation locations for high-value crops may provide some insight to inform long-term planning within the agricultural industry.

We are now extending the suitability modeling methodology to other important perennial crops, including blueberries, cherries, hazelnuts, apples, and hops. This work, supported by the USDA Northwest Climate Hub, includes the development of an interactive web tool, which will show the current and future potential distributions for each crop. We will share the tool through climatetoolbox.org when it is complete. In the meantime, we welcome your input as we look to validate and improve the models. I can be reached at lparker@uidaho.edu.