In November I participated in a truly innovative summit titled, “Safeguarding Idaho’s Economy in a Changing Climate – Our Water, Our Land, Our Health, Our Future” which brought together a diverse coalition of public and private stakeholders to discuss economic resiliency challenged by our changing climate. This first-of-its kind, for Idaho, summit occurred simultaneously in Boise, Moscow, Ashton and Pocatello, ID with keynote speakers in Boise streamed to the remote locations. Keynote presentations were followed by facilitated workshops at each viewing site. The goals of this conference were to share what efforts were underway across multiple sectors of Idaho’s economy to address climate change, explore economic opportunities and efficiencies, build new collaborations and provide resources for future projects at all scales.

The facilitated workshops followed a model known as “Design Thinking” described by the event organizers as “… a well-proven method of problem solving that uses creativity in identifying insights and possible solutions and rationality in analyzing and planning various solutions. For the workshops, we are pulling exercises from the Human Centered Design (HCD) Toolkit, which integrates deep social listening into an additive idea building design process, which includes rapid prototyping, community feedback and iteration. This process results in highly successful solutions, which may include messaging, tools, campaigns and products.” 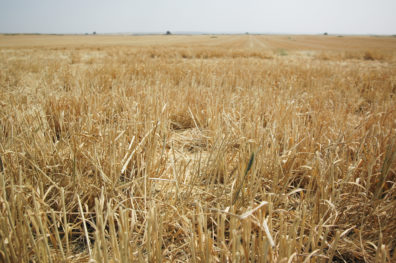 Some dryland farmers are already employing many practices that would be considered climate friendly, such as direct seeding into fields with crop residue conserving the soil and its moisture. Photo: Jennifer Cole/USDA under CC BY 2.0.

Workshops at the UI campus in Moscow focused on forests and wildfire, health and quality of life, recreation, fish and wildlife, agriculture and rangeland and infrastructure and the built environment. In the agriculture and rangeland workshop we discussed both potential economic and agronomic challenges caused by climate change – including potential challenges caused by regulatory attempts to address climate change. Our group had a wide range of opinions on the subject of climate change and consisted of large and small operation agricultural producers, agricultural industry representatives, environmental advocates and a few academics such as myself. A reasonable person could consider this blend of views and positions a potentially toxic stew but I found the opposite to be true. While I doubt those with the strongest opinions were shifted much by the workshop I am continuously impressed by people’s ability to civilly and thoughtfully work over a contentious issue when they are face-to-face in small numbers. Interesting insights can be gained, such as when a large acreage dryland farmer and self-described climate skeptic pointed out that he employs many practices that would be considered

The workshop was not just an open discussion however, but had the tangible objective of steps to be taken in the agriculture and range economy to increase resilience to and mitigate effects of a changing climate. Our group’s conclusions? We suggested that there is a vast untapped consumer base who would pay a bit more for agricultural products produced in a climate friendly way. However, due to the way the commodity markets are constructed, preserving the identity of products produced under such a system is currently impossible if those products are sold into the existing commodity distribution system. We felt this presented an opportunity for entities to build alternative agricultural product marketing systems that allowed the end purchaser to be confident that they were supporting climate friendly sustainable agriculture – on a landscape scale. 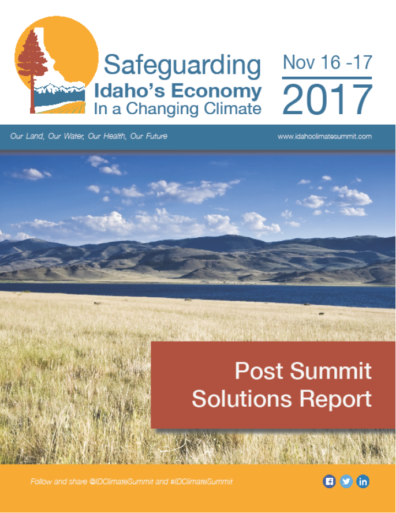 The Safeguarding Idaho’s Economy in a Changing Climate Workshop was not only an open discussion, rather was focused on identifying solutions, which they published online in their Solutions Report (http://www.idahoclimatesummit.com/report)/

What would this entail? Not much, just an audacious re-imagining of many aspects of the current ag-economy. Government farming programs would need to define and support “climate friendly” practices. Lending institutions would need the incentive to include these considerations in their risk and value assessments. Identity preserved products (in northern Idaho, for example, small grains, legumes, forages and cattle) would need new marketers or existing marketers would need to expand their current product lines and distribution channels. Finally, assessment and education tools would need to be in place to ensure the general public, policy makers and the agricultural industry were confident that the proposed system was economically sustainable and effective in application.

Could it work in our current political climate? I have no idea, but I believe it was an outcome true to the theme of the conference. We explored mainly market driven solutions to the challenges of climate change from the perspective of the agriculture and range economy. We were not always in agreement but we were civil and engaged. I thought it was a great start.