Models suggest that climate change in our region will involve an annual temperature increase of 3-4°F by the 2050’s, accompanied by changes in precipitation patterns, including drier summers despite a 5-15% increase in annual precipitation (Kruger et al. 2017). Even with this information, uncertainty still exists about what climate change will mean for agriculture, in general, and for dryland farming systems in our region, in particular. The book Advances in Dryland Farming in the Inland Pacific Northwest, does its part to help managers make decisions despite this uncertainty. Three chapters in this book explore management of diseases, insects, and weeds (the three major categories of pests) and were written by teams of authors led by Elizabeth Kirby (Washington State University), Sanford Eigenbrode (University of Idaho), and Ian Burke (Washington State University), respectively. Though these chapters provide a wide range of regionally-relevant information that goes far beyond climate, I found it particularly interesting to read through them with an eye to what farmers might expect in terms of changes in pest pressures as a result of projected changes in the climate. Through this process, I learned that although climate change models have improved vastly in recent years, quite a bit of uncertainty exists about the effects of climate change on complex biological systems.

The main factors at play in terms of future changes and their impacts on agriculture are precipitation, temperature, and increased concentration of atmospheric CO2. These factors will affect crops as well as crop pests. While great differences exist between these categories of organisms, and between species within each category, there are some generalities that can be found.

Some effects of climate change on pests are direct. For example, higher temperatures may lead to a shorter life cycle, and thus more generations per year, for some insect pests. Changes in temperature and precipitation will lead to a shift in the ranges of some pest species. In the case of weeds, the effects on weed-crop competition will make conditions more hospitable for weeds in some scenarios, and less hospitable in others.

Other effects are indirect. For example, Burke and his co-authors mention the changes in cropping systems and cultural practices as one way that climate change will indirectly effect weed species. For example, if a decrease in summer precipitation makes it less feasible to include spring crops in rotation, this will eliminate one of the tools that growers currently use to combat winter annual weeds. Another way that climate change can indirectly affect pest species is through its impact on organisms providing biological control to a pest species. 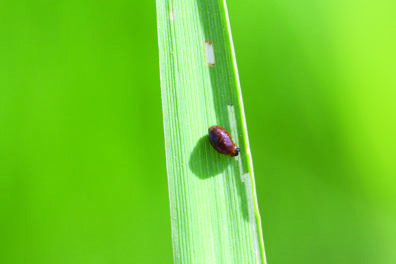 Given the advancement in models projecting effects on temperature and precipitation due to climate change, I began to wonder why there are not more projections of climate change’s effects on agricultural pests. An initial search on the topic, showed me that there are at least a few factors in play:

Agriculture involves complex systems with many interacting factors. These include climate, management, as well as the biotic and abiotic environment. Interactions between environmental and biotic factors are complex, making projections challenging (Juroszek and von Tiedemann 2013).

There is simply a lack of studies on many of the agricultural pests in our region. For example, Eigenbrode and his co-authors say with regard to wireworms (Figure 2) that there are “no scientific studies or associated data that would suggest a correlation between wireworms and climate change, though we could speculate based on biology alone that number of generations per year, developmental time, life cycle, growth rate, or their known range may increase due to warmer overall temperatures in the inland PNW.” A similar lack of scientific studies exists for many other pest species. 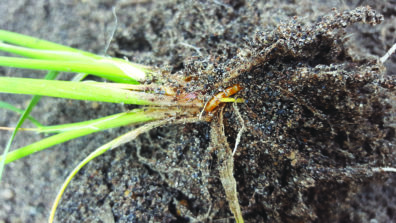 Figure 2. Wireworm larva feeding at the base of a wheat plant. Wireworms are the larval stage of click beetles and can cause extensive damage to cereal crops through feeding on germinating grains, roots, and stems. (Source: Eigenbrode et al. 2017)

Climate is not the only change affecting agricultural systems. According to Kirby and her co-authors, “adoption of new technologies and cropping practices may have a greater impact on wheat and barley diseases than climate change in the near future.” New cropping practices and other important changes driven by societal and economic factors may be more difficult to predict than environmental changes. For example, future market conditions may lead to the expansion of a new crop species in the region, dramatically changing relevant pest pressures.

The constantly changing landscape of insect pests and diseases has always required farmers and researchers to adapt. It’s therefore likely that many of the same strategies currently used to combat these organisms will be useful to adapt to changes in pest pressures resulting from climate change. These strategies include improving genetic resistance, altering planting schedules, new chemistries, and biological control. Continued research in this area will provide both improved predictions and critical information for producers making decisions in the face of uncertainty.

Learn more about recent research on weeds and insect pests of the inland Pacific Northwest cereal systems in the chapters on these topics in Advances. Or hear directly from the authors of the weed and insect chapters in the webinar, Integrated Weed Management and Insect Pests in Dryland Cereal Systems on Monday, December 18 8:00-9:00 am.

A full set of references for the information presented is available in the above chapters in Advances in Dryland Farming in the Inland Pacific Northwest.