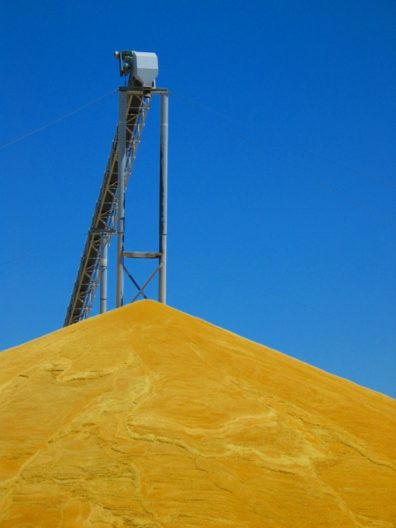 Over 30% of wheat is grown in temperate drylands globally, which are expected to see a 41% increase in suitability for rainfed agriculture. Photo credit: Flickr user Sparky, under CC BY-NC 2.0.

One challenge I struggle with when sharing research focused at global scales is how to tease out answers to questions that are meaningful in the region and at the scale I work in. My approach is to focus on how the big picture results sketch out, and think about what it all means (even when the specifics are not exactly right, which they rarely are). Hopefully I’ll be successful in this article about a paper I co-authored, on agriculture in temperate drylands (I define these below) at a global scale. Led by Dr. John Bradford at the U.S. Geological Survey, we looked at temperate drylands across the world, and explored how rainfed (non-irrigated) agricultural areas could shift as the climate changes. Read on, and see if I convince you that wheat growers in the Pacific Northwest should care about these results.

First, what are temperate drylands? “Temperate” are regions in between tropical and polar, temperature-wise. And “drylands” are areas where plants (including crops) are water-limited, and vulnerable to droughts. The questions our paper discusses in these temperate drylands are:

In this article I focus on the second question, but if you want to read about the first one, take a look at our paper, here.

Using a process model that captures how water reaches the soil, how it is used by plants to grow and produce biomass, how it is stored in the soil, and the ways it moves out of the soil; we found that globally, temperate dryland areas suitable for rainfed agriculture are expected to increase 41% across the world by the end of the century. For some regions, that increase is even greater: East Asia could see a 78% increase. But that’s the net change, and some areas can expect to see reductions too, like the southern Great Plains here in the U.S., and the southeastern portion of the area in East Asia.

These are interesting global results, but why should we care in the Pacific Northwest? Wheat is one of our region’s main crops, and over 30% of the world’s wheat is grown in temperate drylands around the world (Fischer et al., 2014). These changes in suitability in the future could affect global wheat production and wheat prices. If the decreased suitability we modeled in East Asia (oranges in Figure 1) leads to lower wheat production, that could pose an opportunity for farmers elsewhere. Maybe here, since results in our region suggest that suitability is likely to be unaffected (light blue in Figure 1). Or in southern Canada, where there may be increases in agricultural suitability (dark blue in Figure 1). Similarly, areas along the northern edge of temperate drylands in Asia—mostly in southern Russia, another important wheat-producing country—may see increased suitability for agriculture. If these changes in suitability are concentrated in many of the top wheat-producing countries in the world, shifts in opportunities and competition on the world market seem reasonable to expect. 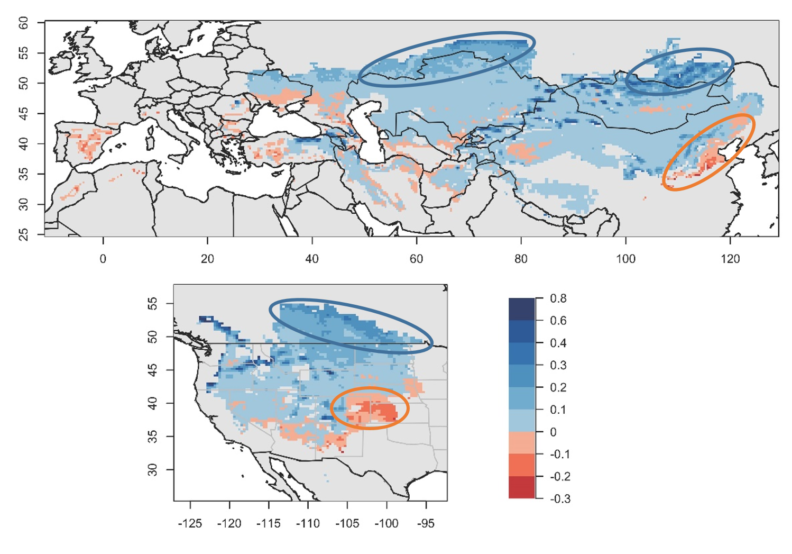 There are a number of points to be careful about, when looking at these results. As I mentioned above, not all wheat-growing areas are “temperate drylands,” so not all were modeled. Neither were tropical or subtropical agricultural lands, though these are more likely to see decreases in suitability as temperatures increase. The model used in this study does not include carbon dioxide fertilization, which is the direct effect that increased carbon dioxide concentrations in the air have on how efficiently plants produce biomass—and yield—with a given amount of water. In the Northwest, other modeling studies suggest that this fertilization could outweigh any detrimental effects of climate change in some crops, including wheat (Stockle et al., 2012). As a farmer, you’d look at details of soil, soil health, slope, where to sell, etc. that are too fine scale for this model. And there are a number of other factors that could change the face—and geography—of global wheat production by the end of the century, including consumer preferences, markets, technology, or genetic improvements.

This just means that this study is one piece of a complex puzzle. Yet it can help pin-point where there might be changes in wheat production across the world, which could have ripple effects on prices and availability for Northwest wheat growers. And though we can’t say for certain what those changes will be, we can say with confidence that eastern China, southern Russia, southern Canada—Saskatchewan and Alberta—and central U.S.—western Kansas and eastern Colorado—are places to keep an eye on in the future, to see exactly how their wheat production changes as the climate changes.

Our paper describing the full study is:

And my thanks to Michael Brady, Jonathan Yoder, Chad Kruger, and Georgine Yorgey for their input and opinion on whether I make a convincing argument.