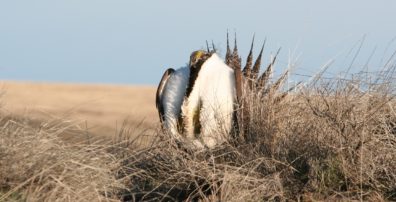 Fields enrolled in the federal Conservation Reserve Program (CRP) have augmented native habitat and helped Greater Sage-Grouse avoid extinction in the agricultural landscape of eastern Washington after decades of decline (see part 1 of this series for details). Even though the local sage-grouse population has stabilized in recent decades, it remains highly vulnerable because it is still small and isolated from other populations. As we enter an era of rapid climate change, the right conditions for sage-grouse habitat may shift away from currently occupied areas, requiring populations to move and colonize new areas over a short period of time. And they must do so across a landscape that is now replete with major highways, urban areas, and other barriers to movement. And even if wildlife can cross these barriers, the area of suitable, available habitat may shrink under the future climate.

Could the CRP—that has helped species like sage-grouse in eastern Washington survive—also help them adapt to climate change? Can it be done without taking additional land out of agricultural production? We think so. Currently, CRP enrollments are scattered across about 13% of agricultural acres in the Columbia Basin of eastern Washington without a coordinated, regional-scale vision for how they help wildlife. Most CRP fields are far from native habitats and are therefore not available for many wildlife species (though they still meet other CRP goals). What if some of the CRP enrollments were clustered around native habitats more? This could help in two ways: by increasing habitat in the places where it is most valuable, so populations aren’t so small, and by connecting habitat, so populations aren’t so isolated.

Let’s address population size. To explore how CRP can increase habitat in the right places—and therefore support a larger population of birds—we ran our model of sage grouse habitat use (described in Part 1) on a “designed” landscape. We told the model that CRP fields in Washington were now concentrated near areas of occupied sage grouse habitat (rather than spread out over the Columbia Basin, as occurs in the real landscape). This “designed” landscape had 63% more suitable habitat than the landscape with the real distribution of CRP fields (compare panels A and B in Figure 1). To be sure, such a large reallocation of CRP enrollments is not practical, as the program has other goals beyond the benefit of wildlife (e.g. erosion control and improving water quality), and farmers make the ultimate choice to enroll in CRP. Still, it is useful to know that the potential is there, and could happen through redistribution, rather than only through significant changes to the total acreage in CRP. 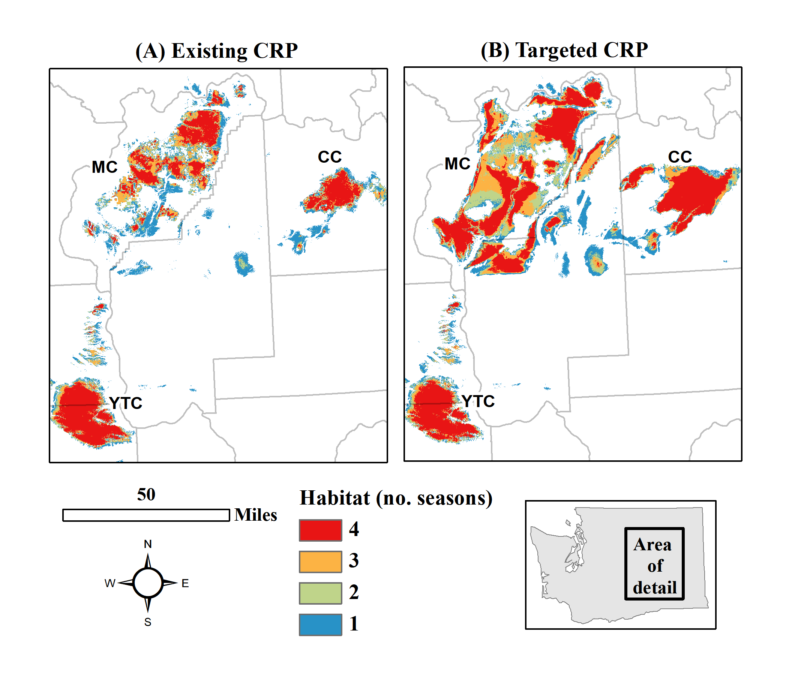 Figure 1. Modeled Greater Sage-Grouse Habitat in Washington. The left panel (A) shows the model prediction of suitable habitat in the current landscape, with about 1.4 million acres of fields enrolled in the Conservation Reserve Program (CRP) in eastern Washington. The right panel (B) shows an alternative model scenario where all CRP fields are concentrated near areas of occupied native habitat, which led to a 63% increase in suitable habitat. The four colors represent the number of seasons in which an area provides for the habitat needs of sage-grouse. Areas without color are not predicted to be suitable for sage-grouse. Figure from Shirk et al. (2017), used with permission.

Now what about isolation? Landscapes like eastern Washington have barriers to movement that make it hard for wildlife to track their habitat over time as it shifts with climatic changes. For example, in a recent study we found that powerlines and large expanses of annual crops can make it hard for sage-grouse to migrate. Clustering CRP fields around remnant patches of native habitat between fields could help create small islands of habitat across this large cultivated landscape to serve as stepping stones from their current to their future habitat. Analyses such as this one can help farmers and those who manage the CRP funding plan these so as to maximize the benefit to sage-grouse and other wildlife while minimizing the amount of CRP needed.

Powerlines (like these in Douglas County, Washington) and large expanses of cultivated lands can act as barriers to movement for Greater Sage-Grouse. Strategically selected CRP fields could reduce the negative impacts of croplands (though other approaches would need to address the impacts of powerlines). Photo courtesy of Michael Schroeder.

Importantly, these two potential uses of the CRP program for climate adaptation would not involve any additional funding or cancellation of any existing CRP contracts. Every year some contracts expire, and a reallocation of CRP lands could happen slowly over time. For example, some portion of the new contracts made each year could be strategically targeted at interested farmers in those areas where CRP would contribute most to habitat or linking current to future habitat. Our models predict this would greatly benefit wildlife like sage-grouse now, and in the future too, as habitats shift over time with climate change.

In this era of dwindling biodiversity and limited funding, conserving species and the ecosystems we all depend on for clean air, water, and healthy, productive soils in agricultural landscapes while still feeding the world will require innovation, careful planning for the future, and making the most of our conservation dollars. A limited re-allocation of CRP enrollments to better help wildlife survive and adapt to climate change is a great example of doing just that.