The presentation addressed computer modeled temperatures and precipitation patterns under different, likely, global greenhouse gas emissions scenarios over the next century. The results from different scenarios and models differed somewhat, but all pointed to a significantly warmer Northwest, on average, with greater precipitation overall, specifically in the winter and spring months. More frequent and intense droughts coupled with an increased demand and decreased certainty of irrigation water are projected. Increased frequency and intensity of wildfires are expected. Finally, the increase in atmospheric carbon dioxide and shifts in precipitation cycles are expected to deliver a “boost” to productivity of forages and small grains in much of the Northwest. To sum it up: the long range forecast for the Northwest is for hotter, drier summers with wetter springs and wetter late-falls and winters.

The audience seemed aware of the doom and gloom aspects of climate change – generally that things are getting hotter and bad things will happen when it does. What seemed new to this audience was seeing the expected changes broken down, scenario by scenario, crop by crop, and addressed as a problem to be worked through. A question and answer session afterward led to a deeper discussion of adaptation to these expected changes, such as altering turn-out dates or even grazing leases to capture forages at peak quality and availability. Long-term droughts are more than serious to a rancher. In the last drought the Southwest lost more cattle than are currently managed in the Northwest. The presentation highlighted how the Northwest is positioned to suffer comparatively less extreme chances of intense, long-term droughts compared with Southwest US, which prompted discussion of opportunities to export forages and other comparative economic advantages the changing climate may bring.

To be sure, there was some hostility to the presentation but not uncivil hostility. I spoke with people who had well-reasoned arguments for skepticism in the accuracy and appropriateness of trying to project climate conditions in coming decades. Mostly, I heard people happy to have some specifics to mull over, which brings me back to where I started this article. People are great at rising to a challenge and working to solve problems we can wrap our minds around. Perhaps too much of the national climate change discussion to date has come across as either unfathomable or not practically addressable which may lead people, understandably, to tune out. When given specific details about how climate change may or is affecting their day-to-day operation, these ranchers were quite willing to spend some time “war gaming” mitigation and adaptation scenarios at the farm and ranch level. 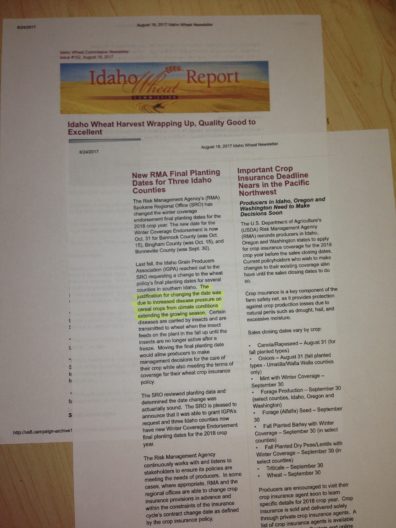 I found a concrete example of this willingness last week when the Idaho Grain Producers Association, not a group known for climate change advocacy, successfully lobbied USDA’s Risk Management Agency to change crop insurance dates for south-east Idaho winter grain growers. The reason? “The justification for changing the date was due to increased disease pressure on cereal crops from climate conditions extending the growing season” (Idaho Wheat Commission Newsletter Issue #151, August 11, 2017). As the discussion around climate change becomes less abstract it becomes increasingly relevant to those who may have been skeptical to date. This should encourage and inform the research community. You’re not yelling into the void if you can translate your results in a way that informs the day-to-day management decisions farmers and ranchers are making. And concrete examples like this one show that you can be.