By: Andrew Shirk and Sonia A. Hall, 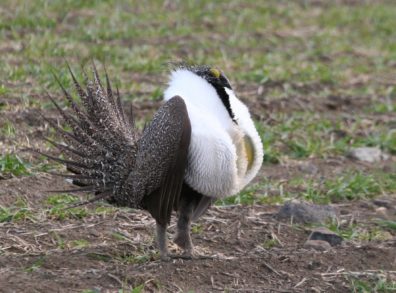 Healthy ecosystems provide us with clean water, clean air, and rich soils, resources that help meet our needs and fuel our economies. They also support many wildlife species. If we can consider those animals as an indication of the state of these ecosystems, things look grim globally. We are losing species at least 100 times faster than what’s been the norm, based on the fossil record. Currently, 1 out of every 4 mammal species and 1 out of every 8 bird species is under threat of extinction, with more species becoming threatened each year. One of the main reasons for these grim numbers is loss of habitat, and growing crops on what was their habitat has contributed to that. But agriculture is also key to providing for our needs and fueling our economies. So can agricultural landscapes contribute to both food production and habitats? From our experience with Greater Sage-Grouse conservation in eastern Washington, we’d argue that the answer is yes.

When much of the area east of the Cascades was a sea of sagebrush, sage-grouse numbered in the tens of thousands. Now, the region produces a wealth of grains, fruits, vegetables, and livestock. Food. But this has taken a toll: since 1960, sage-grouse have declined by over 75% in Washington (Figure 1). There is some good news, however. Notice how the steep decline from 1960 (left part of the figure) stabilizes after about 1995 (right part of the figure). Also note what happened in between: enrollment of agricultural lands in the Conservation Reserve Program (CRP). The Conservation Reserve Program began in the 1980s as a nation-wide effort to reduce soil erosion. The first enrollments in Washington began in the early 1990s. Biologists soon started to observe sage-grouse using CRP fields, particularly after the vegetation began to mature in the mid-1990s… about when the state’s population stabilized. 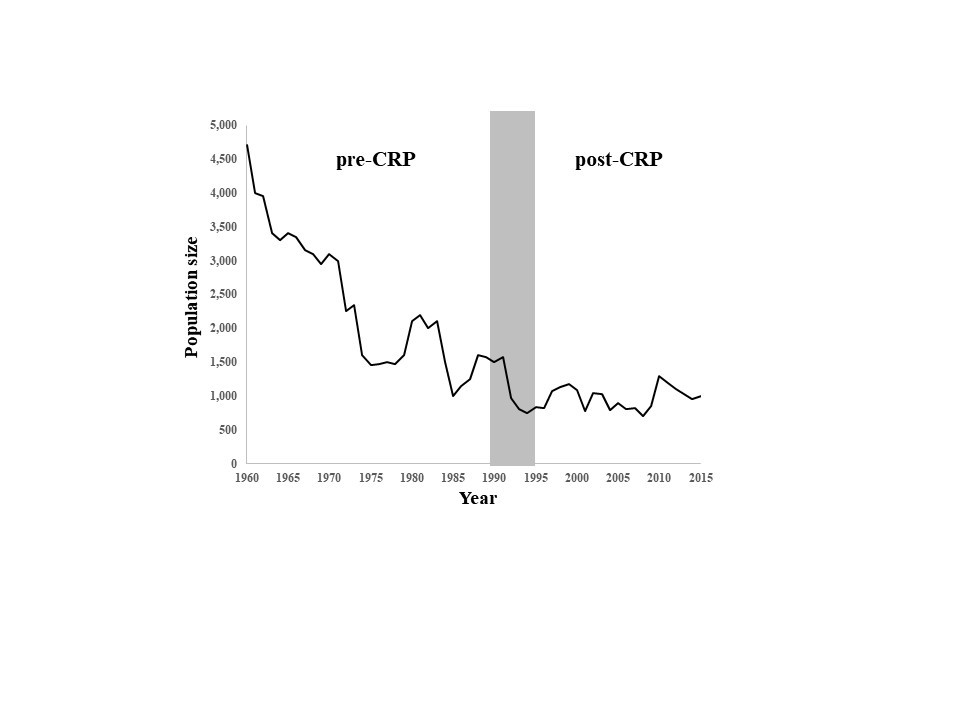 I (Andrew Shirk) recently worked with wildlife biologists Michael Schroeder (Washington Department of Fish and Wildlife) and Leslie Robb and research ecologist Sam Cushman (US Forest Service) to quantify the relationship between CRP and sage-grouse in Washington. Based on models relating habitat characteristics to where we know sage-grouse are, we found that the birds were most likely to be present in large expanses of native sagebrush far from human impacts like major roads, cities, and power lines (no surprise there). But we also found that agricultural fields planted in perennial vegetation (as part of the CRP or related programs) instead of annual crops could make it more likely that sage-grouse would occur where otherwise there was not enough sagebrush habitat, like the Moses Coulee area of Douglas County and the Crab Creek area of Lincoln County. Importantly, CRP fields alone are not able to sustain sage-grouse. Sage-grouse still need native habitat, but in areas where it is rare, CRP fields can help them persist. 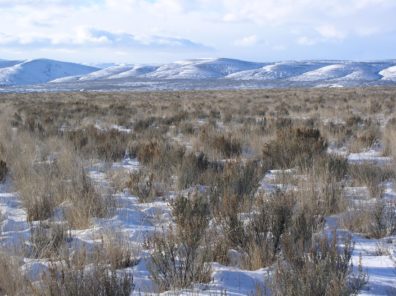 To assess the value of these CRP fields as sage-grouse habitat, we ran an alternative form of our model that assumed all CRP fields were planted back to annual crops. The result was astounding: the state lost two thirds of its sage-grouse habitat. Almost all of the places in the Moses Coulee and Crab Creek areas that the model had previously identified as suitable became unsuitable without CRP fields (compare panel A and B in the maps below). If the CRP had never been implemented in Washington, our models indicate the only remaining population would occur in the Yakima Training Center, where there still is a large patch of native sagebrush within the bounds of the military reservation. 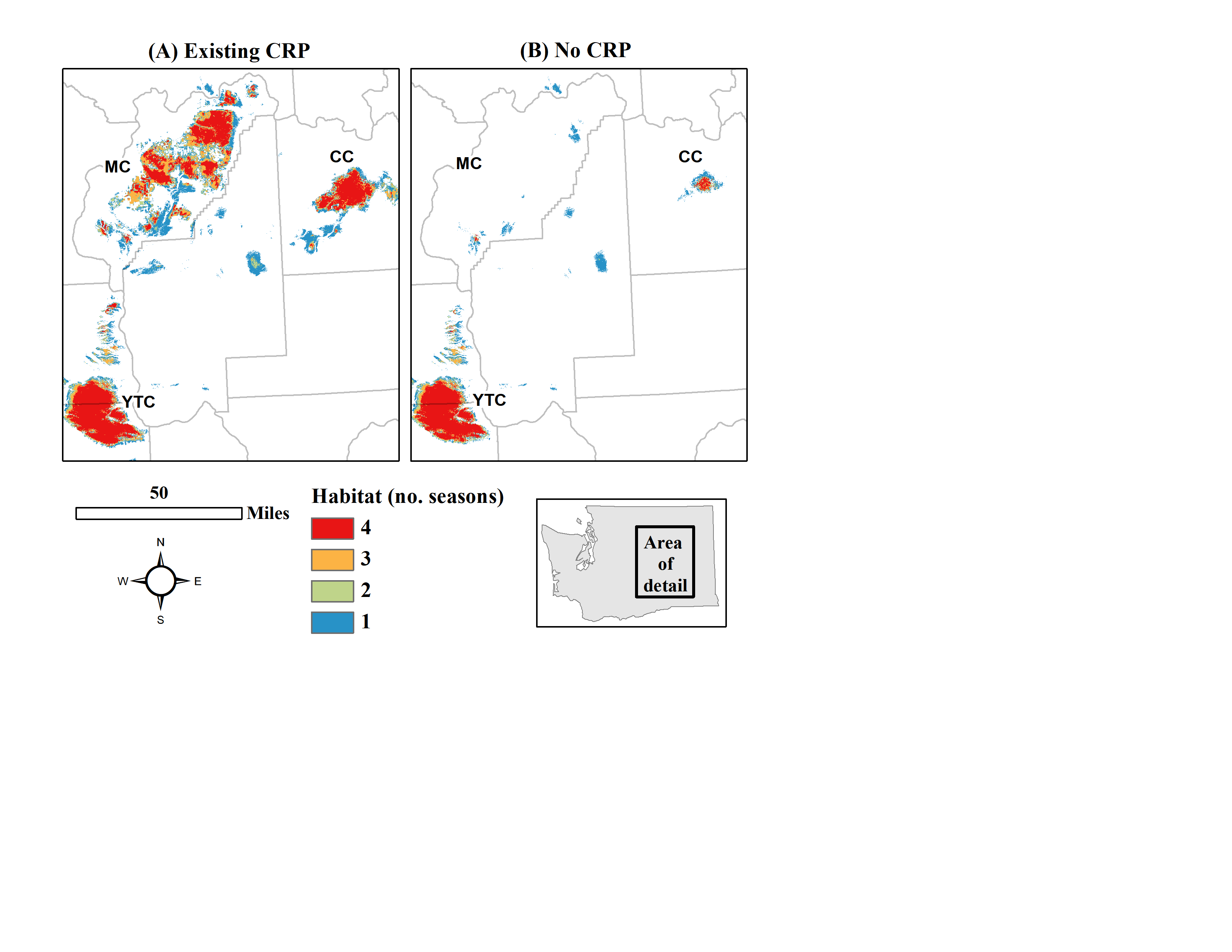 Figure 2. Modeled Greater Sage-Grouse Habitat in Washington. The four colors represent the number of seasons in which an area provides for the habitat needs of sage-grouse. Areas without color are not predicted to be suitable for sage-grouse. The left panel (A) shows the model prediction of suitable habitat in the current landscape, with about 1.4 million acres of fields enrolled in the Conservation Reserve Program (CRP) in eastern Washington. The right panel (B) shows an alternative model scenario where all CRP fields are planted in annual crops instead of perennial vegetation. Figure from Shirk et al. (2017), used with permission.

A single small population of sage-grouse is unlikely to persist in isolation, for two main reasons. First, small, isolated populations are vulnerable to disturbances. For example, if a wildfire were to burn across the Yakima Training Center, the birds would have nowhere else to go until the sagebrush regenerated. Second, such populations tend to become inbred, experience lower birth rates and survival, and eventually going extinct.

Ultimately, for agricultural areas to feed the world and also co-exist with wildlife, we need to make some room for wildlife too (and remember, this is not just for wildlife’s sake, but for the ecosystems that sustain them, and us). The CRP program is a great example of doing just that. It has increased the area of suitable habitat for sage-grouse and other sagebrush species, and has helped steer Washington’s sage-grouse off a path to extinction. Though providing habitat for species is essential to their persistence over time, it alone is not sufficient. In an era of rapid climate change, populations also need to be able to move freely across the landscape to track their habitat as it shifts over time. Yet the modern landscape is crisscrossed by movement barriers, things like roads, cities, and large expanses of poor habitat. Stay tuned for Part 2 of this series, where we’ll discuss how CRP fields might play also play a role in helping sage-grouse and other species move to survive under climate change.