The conditions the Northwest experienced in 2015 have received a lot of attention, because we saw drought even though precipitation was close to normal. So the drought was due to higher temperatures, which meant snow didn’t accumulate anywhere near as much as it does on average. With less water available for irrigation in summer (see our earlier articles on the 2015 drought here and here), we’d expected irrigated crops to suffer, and we’d also expect growers’ bottom line to suffer. 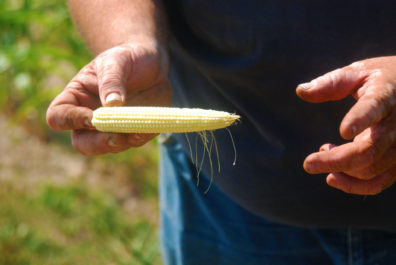 Drought (and other stresses) can have a significant impact on crop production—see this comparison of the size of an ear of corn in Missouri during the 2012 drought to its “normal” size (space between hands). The expectation is that decreases in production will lead to drops in revenue, but is that always the case? Photo: Malory Ensor/KOMU News under CC BY 2.0

But when the National Agricultural Statistics Service’s Annual Statistical Bulletin for Washington State came out in October 2016, it was followed by an article in Capital Press discussing the apparent paradox that agricultural production values hit record highs in 2015, even though the region was under that newsworthy “snow drought.” Though I did not personally fact-check the Capital Press article, it’s an intriguing paradox. A presentation I heard at the recent (January 2017) Climate Impacts to Water Conference provided some insights. Ballav Aryal, a graduate student in the School of Economic Sciences at Washington State University, presented research that highlighted two factors that might explain this apparent paradox.

Factor number one: price elasticities. What’s that? Say, for example, that wheat production is very low this year. If there’s nothing consumers can really replace it with, the wheat that’s available becomes very valuable, and its price will likely go up significantly. That’s what economists call an inelastic demand. If, on the other hand, consumers could just shift to eating oats or corn instead, then that wheat would not be as critically valuable, and its price might not increase much at all. That’s an elastic demand.

Price elasticity is a factor that growers have little control over. But if the crops that are impacted by drought (and so have lower production) also happen to have inelastic demands, then their prices might increase significantly when production is slow. Those increases in the price might more than make up for the decreased production. That is, total agricultural revenue could increase even if the amount produced decreases.

It’s also worth noting that price increases could also be responding to economic factors in other regions of the world producing the same crops or other substitute crops, or to policy shifts, or to consumer preferences. But the bottom line remains: if the price moves in the opposite direction to the amount produced and the demand of the crop is inelastic, it could compensate for the drought-driven low production, leading to high revenues even in drought years.

Factor number two: water allocation. In contrast to the price factor, water allocation may be a factor that growers can control, at least to some extent. This of course is focused on irrigated crops. If in any given year growers apply their available water to an array of different crops, when their water availability is curtailed due to drought they will make decisions on what crops to favor with the water they do have. If they are able to direct their water to those crops of highest value, then their revenue will suffer less (maybe much less) than if they can’t and irrigation water to all of their crops is reduced about equally. Water leasing or otherwise trading water among producers—or even irrigation districts—can have the same effect on the overall collective value of a region’s production in a drought year (see the 2016 Columbia River Forecast for more on this). This factor also argues for a diversity of crops across the region, as having a variety of crops acts as a hedge against drought risk.

So let’s come back to Washington and the 2015 drought. Aryal’s presentation was based on research across nine western states (though it did not include Colorado or California). To really test how important each of these two factors were in Washington in 2015—that is, do they explain Capital Press’s puzzle?—you’d need comprehensive data on the 300-plus crops grown in Washington State, plus specifics on growers’ water allocation decisions. Such data are very hard to come by. However, if such data could be collected and analyzed, we could explore to what extent demand elasticities (which, remember, are outside growers’ control) and water allocation decisions (somewhat within growers’ control) load the dice towards revenues not diving hand in hand with decreased production due to drought. If the strength of the ties between drought-driven decreases in production and in overall revenue is mostly within our control—as a grower, an irrigation district, or as policy makers in the state—we would be able to better prepare for what future climate will bring: more frequent droughts. Of course, that also means that the onus would then be on us to actually prepare. But that’s still the best-case scenario, don’t you think?