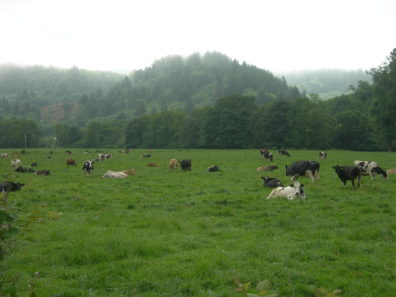 In a previous article I explored how climate change in California’s wine country—coupled with shifting temperature and precipitation patterns in Oregon and Washington—may catalyze new opportunities for winegrape production in the Northwest. I also suggested that these opportunities might be accompanied by an increase in locally produced cheeses due to growth in the region’s dairy industry. In this article, I’ll discuss research indicating that during the 21st century, climate change impacts could lead to more favorable conditions for milk production in the Northwest relative to other current dairy centers of the U.S. In 2016, Idaho, Washington and Oregon produced roughly 11% of the nation’s milk. It is conceivable that this percentage could increase substantially in coming decades.

To date, more in-depth climate change impacts analyses have been conducted for cropland agriculture than for livestock. However, there are multiple field-based studies indicating that rising temperatures will cause heat stress for dairy cows, affecting reproductive health, milk production, and mortality rates. A research team led by University of Washington scientists published an article in 2015, titled Impacts of Climate Change on U.S. Milk Production, analyzing how changing heat stress exposure could drive economic losses associated with decreased milk production at the county scale across the lower 48 states. Production losses were computed on a day-by-day basis, with the simplifying assumption that milk prices would remain constant over time.

Excessive heat and humidity cause dairy cows to become heat stressed— they eat less, drink more, and produce less milk. Authors estimated the physiological effects of heat and humidity on Holsteins, which comprise at least 90% of U.S. dairy cows. Considering the combined effects of temperature and humidity is important because the impacts of both variables on cattle health are non-linear. That is, at low temperatures, humidity does not pose a problem for dairies, but during a hot and humid day, cows are unable to regulate their internal temperature through evaporative cooling, or sweating and panting. Humidity also influences daily temperature cycles because moist air cools off less at night than dry air (I’m thinking about the difference between the arid southwest states, where air temperatures plummet when the sun goes down, compared to muggy summer nights in the southeast).

Researchers averaged 16 different climate models to make projections about climatic conditions in the decades surrounding the 2050s (2040–2069) and 2080s (2070–2099), and found that future climate change is expected to exacerbate existing regional disparities in milk production losses associated with heat stress. Parts of the country that already experience high per-cow losses, such as Arizona, California’s central valley, and southern Midwest states, will experience the most severe additional losses. In contrast, heat-stress losses in the relatively cool Northwest are negligible, and are expected to increase only slightly under summer conditions projected for the end of the century. Historically, most production losses in the U.S. occurred only in the peak of summer, but under future conditions many regions are expected to experience significant losses during spring to fall seasons too. For comparison, by the end of the century Northwest states may average roughly 1% loss in milk production from climate change, compared to a projected loss of 25% in Florida. You can access the original Mauger et al., 2015 article to view maps of projected changes in summertime temperature and milk production for the future decades relative to historical data.

Nationwide, milk production losses due to heat stress already translate to an average of $670 million per year in lost revenue. These economic losses are projected to increase to $1.7 billion per year by mid-century, and $2.2 billion per year by the end of the century. Study authors emphasize that climate change is only projected to reduce nationwide dairy production by 6.3% by the 2080s– thus a measureable, but not devastating, impact overall. However, it’s important to note that most of these losses will occur during the summer, when extreme heat waves cause widespread stress to dairy herds, so losses would be concentrated in one season. Local impacts from heat these events may be severe. Looming losses of this magnitude may incentivize dairies to invest in shade-cloth, cooling systems and genetic development for heat-tolerant dairy cows in some regions.

This study is interesting because it suggests significant geographic variability in how major dairy production regions will be affected by climate change. Time will tell if differences in milk production losses associated with heat stress will in fact drive investment decisions and contribute to shifts in where the majority of the U.S. dairy production occurs by the end of the 21st century. We’re interested in thinking through what kinds of tools and resources could help dairy farmers envision and prepare for climatic conditions projected in the later 21st century.